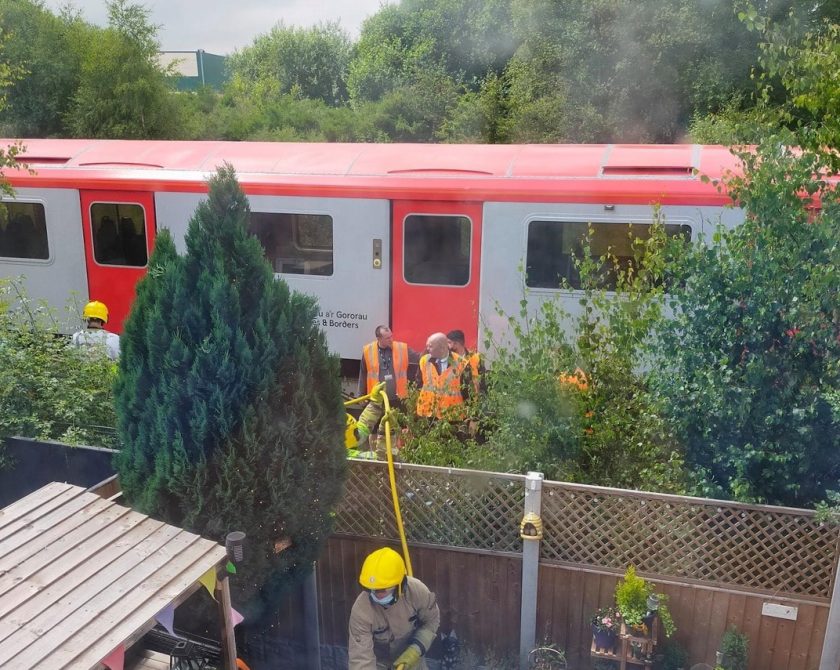 Wrexham News said:
Rail services in the area have been affected following an incident with a new train set to enter service later this year.

Transport for Wales (TfW) have said, “Due to the fire brigade dealing with an incident between Wrexham General and Gobowen all lines are blocked. Train services through these stations may be subject to disruption on all routes.”

Martin, who took the above image, told us how he had heard a loud bang with flames then emerging from underneath the train.

The Fire and Rescue Service have told us, “We were called at 1412hrs to an incident in Wrexham involving a train. Two appliances attended. The stop was called in by crews at 1520hrs.

“We handed the incident over to Network Rail engineers. Cause yet to be determined. The train was owned by Transport for Wales. Smoke coming from the train believed to be due to fire under engine.”

TfW have told us, “This afternoon, while on a training run near Wrexham Central station, one of our Class 230 trains suffered a small fire. Thanks to the actions of the driver, this was extinguished very quickly and no one was hurt. The fire service attended as a precaution.”

“A small number of services between Shrewsbury and Wrexham General have been affected as a result, with replacement bus services in operation, although services have now resumed along the route. We’re very sorry for the disruption to people’s journeys. We advise customers to check before they travel using the TfW Rail website, app, or JourneyCheck page.”

The train is a 230 ‘D-Train’ diesel battery hybrid, made from redundant London tube trains and re-engineered into modern units, and did not have passengers onboard, and we are told “all persons accounted for safely”.

The trains are powered by 2 batteries on each driving car with 4 diesel gensets on the middle car to charge the batteries and as a secondary source of traction.

Five of the 230’s have been ordered by TfW as part of an upgrade to services in Wales. Previously TfW have said the 230’s are “currently planned to be in service in the autumn”.

TfW have been approached for comment on today’s incident.