Three large explosions have rocked a fuel depot near Hemel Hempstead in Hertfordshire shooting flames hundreds of feet into the sky.

Police say there are casualties and emergency services are at the scene.

The first blast happened at 0603 GMT at the Buncefield fuel depot, close to junction 8 of the M1 motorway, 10 miles from Luton airport.

It is being treated as an accident and rumours that a plane was involved are unfounded, said a police spokesman.

The M1 has been closed both ways between junctions 6a and 12.

Those living nearby have been evacuated.

Many houses have been damaged, with some reporting feeling effects from the explosion as far away as Oxfordshire, while it was heard in Surrey and Norfolk.

Witnesses said another two explosions followed the first at 0626 GMT and 0627 GMT.

The Buncefield depot is a major distribution terminal operated by Total and part-owned by Texaco, storing oil, petrol and well as kerosene which supplies Luton airport.

"We are doing everything we can to support the emergency services and to bring the situation under control," said a Total spokesman.

No further details were available, he added.

One eyewitness, Jonathan, told the BBC he was working a night shift in the building next door to the fuel depot at the time of the blast.

He received cuts and bruises.

He was sitting in his office "and the next minute I was on the floor and it was pitch black. I was thrown off my chair," he said.

He and a colleague had to break a window to get out because the doors were buckled, they got out of the front of the building and were taken to hospital by passing motorists.

BBC reporter Colin Campbell said: "There are huge fireballs gushing out of the fuel depot.

"Many people are standing by filming the scene on mobile phones. There are gigantic flames, it would be impossible to contain at the moment, it is out of control.

Plume of smoke after blast, scene from Luton
Police are describing it as a major incident

"It is a scene of utter devastation."

Malcolm Stewart, who drives a tanker at the terminal, said there were 20 tanks on the site, each holding three million gallons of fuel.

BBC correspondent Sinead Wilson, who lives in nearby St Albans said there was a huge plume of smoke covering the sky.

"There is a smell of gas, lots of fire engines, police cars in the area," she said.

"It looks to me as if the entire depot is under fire.

Eyewitness Sam Matton, who lives half a mile from the depot told BBC News: "The sky is sort of orange. The flames have got to be 60ft up in the air.

"The loft hatch in my house has actually fallen out, my neighbour's window has actually broken from the impact.

Dave Franklin told BBC News: "There was a massive loud bang which broke windows above us and to the right. The whole sky just turned orange and black."

Michael Vatty said: "The impression was that it was a clap of thunder, but as soon as we got up we saw the flames. We had the garage door blown in, the front door was also blown in."
Click to expand... 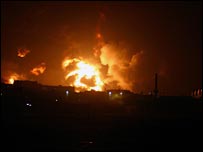 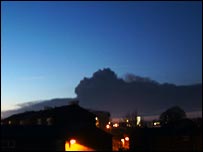 Very close to me as I live in Watford. so much so, I was woken up at 6AM by it. Sounded like several blows on a muffled drum.
Very worried about damage to the local environment and of the people involved where residents have had major damage to their home and buildings in the local area.

Heard this on the radio,sounds very bad and just hope no-one is seriously injured.

Some family Friends who live in Surrey heard it

The good thing is are no fatalities

That's what that was

I was rudely awoken at around 6am by a something which felt like a minor tremor. A few car alarms went off and it didn't seem to be anything local!

I live approximately 45 miles from Hemel Hampstead and it was heard here in Farnborough! 'Total' have uploaded a small site dedicated to the incident. http://www.total.gb.com/media/mediatool.cfm?page=home BBC News 24 is dedicated to the subject. More explosions are going to happen throughout the fire which cannot be put out. They can help it but it can not be put out so has to burn itself out. It should continue for approximately 2-3 days.
D

Coxster said:
It should continue for approximately 2-3 days.
Click to expand...

Think of the pollution

We heard a minor bang (quiet, but could wake people up) here but I didn't realise what it was.
C

yes I was also woken up by the oil depot at 6:00. yet I didn't feel and vibrations or any shaking. I could see flames (a yellow glow) at the bottom of this black smoke, like others I wonderd if it was a plane, I turned on the TV and saw what it was. I still cant believe it was heard 40 miles away!
C

The smoke contains various substances and it is advised to stay away from it if you live close by. It can cause coughing, sore eyes and other things.
T

Satelite pictures show the smoke covering an area about 3 times the size of the IOW.

If you're not trying to be a smart arse like Paul, the smoke contains some rather hazardous compounds, such as a variety of acids. A nice variety of hydrocarbons such as methane are also likely, and also poisonous. So be careful nearby and just keep doors and windows closed.

One other thing that has resulted from this. Oil compamies have put up the price of petrol by 3 pence a liter already

hock: And they expect more price rises to follow

A friend of mine who lives in Hemel Hempstead just sent me some pics from his webcam of the smoke.

This morning I woke up to a massive black cloud outside my window which didn't seem to have no end to it... I just took it as bad weather and didn't think much more of it, then a few hours later I was informed that there had been a massive explosion from the Buncefield fuel depot near Hemel Hempstead and that the big black cloud in the sky had no connection to the weather what so ever... It was infact the smoke from the explosion nearly 50-60 miles (maybe further!) miles away.


May God bless all those who lost their precious lives in this tragic situation. RIP
T

ChristopherJ said:
May God bless all those who lost their precious lives in this tragic situation. RIP
Click to expand...

Nobody has died yet.
I am pleased to say living in Portsmouth, i heard absolutely nothing. I have been to the East Kent today, so i got up at 07:30 when the alarm went off.
As i got in the car at about 07:45, Royalscot texted me telling me a plane had crashed on an oil refinery in Hemel Hempstead.
I stopped at Guildford about 08:30 to pick someone up and listened to the radio for 20 minutes, who by now had scrapped the plane crash bit.
Then i drove along the A3 to the M25, anti clockwise round the M25 to the M26, then southbound on the M20 to the A249, never saw anything apart from the usual bad weather.
I came back on the same route in the dark, i stopped at Clacket lane services {M25} to examine a possible headlight defect and then ran without incident at 90mph all the way home {90mph up the bank at Haslemere in a fiesta with poor headlights, in traffic - who needs fair ground white knuckle rides 8) }
When i got home i did my usual quick end of a long journey visual exam of the car and noticed it was quite oiling dirty, but i was racing with a diesel astra estate on the A3, so that might be why

Got the day off school today due to smoke

Harry Potter said:
One other thing that has resulted from this. Oil compamies have put up the price of petrol by 3 pence a liter already

Theyve told people in the South not to panic buy, but im sure the morons will anyway. :x :roll:

It supplies the london airports - Heathrow included i think - and it souldnt really affect fuel supplies and prices as it is more for industrial/commercial use.

hock: . Didnt hear it personally over here in lil old Bristol, but when i wen to the paper shop this morning i could smell the faint smell of burnt fuel in the morning air, until after a few minutes my nose 'adapted' to it.

Glad no one was killed, and lets hope it stays that way.

Some really....amzing.....pictures on the Nespapers this morning of the balck cloud. One i particulay liked was of the Canary Warf Towers and West london skyline with the massive shaft of thick smoke and the cloud in the background.
C

Richard Armstrong said:
Got the day off school today due to smoke

oh me to as i got to marlborough! 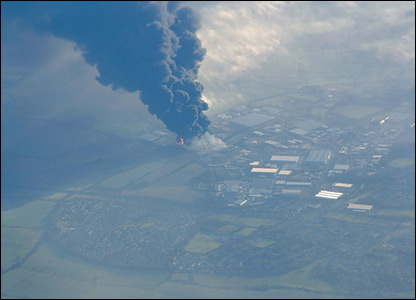 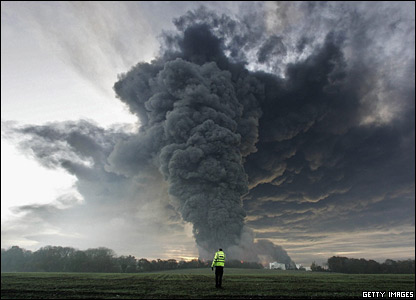 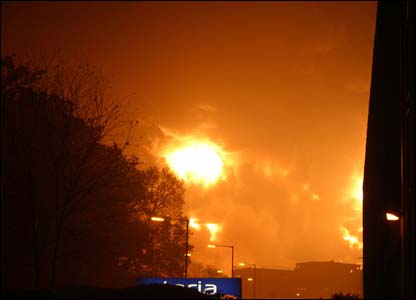 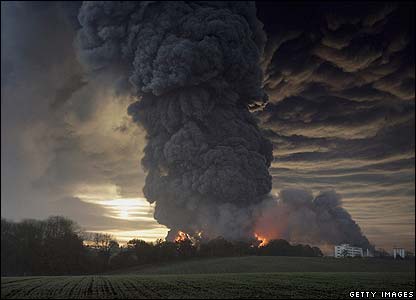 WOW is all i can say

My knuckles tend to wear away when I'm in your car Steve...
C 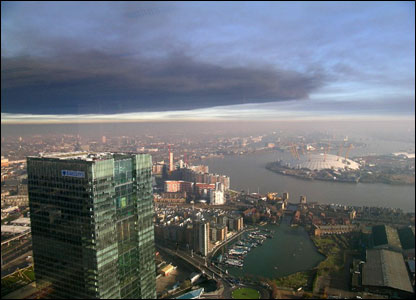 I know it's a petrol depot, otherwise I would think the UK had a little vulcanic problem

Those pictures are awsome, especially that one with the officer..... Realy one of the best photos I have seen this year.
C

10 of the 20 fires have now been extinguished/burnt themselves out, although these were only the smallest ones.
C

the foam is falling to put out the biggest fires