A full-scale model of the interior of the new high-speed trains that will travel through Kent has been unveiled.

The new trains will reduce journey times between east Kent and London St Pancras by up to 40 minutes, but fares for the service will rise by up to 35%.

Each train will have 354 seats, with one class of accommodation throughout.

A display model of one of the 28 six-carriage trains was shown off by Southeastern at Ashford station in Kent.

The first four units of the £6m trains will arrive for testing in 2007.

From 2009, the trains will run between London's King's Cross station and Ashford in 36 minutes - less than half the time it currently takes.

London to Canterbury journeys will drop from 102 minutes to an hour, while London to Folkestone will come down from 98 minutes to 62 minutes.

All the trains will be named after Britons associated with speed.

Dr Stephen Ladyman, transport minister and MP for Thanet South, said the high speed service would transport passengers from St Pancras to the site for the 2012 Olympics in less than seven minutes. 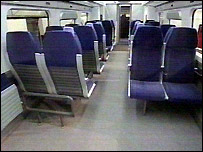 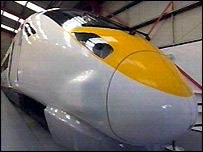 Looks quite nice, although I cant see why there is a huge gap in the passenger section of the train, the windows dont look too large either, and there dont appear to be any bays.

Other than that, nicey nice!
G

Jamie said:
Looks quite nice, although I cant see why there is a huge gap in the passenger section of the train, the windows dont look too large either, and there dont appear to be any bays.

Similar to Pendolino Windows. Something to do with HSE regulations no doubt...

Looks OK, - we need a better pic than that though!

Jamie said:
I cant see why there is a huge gap in the passenger section of the train
Click to expand...

Wheelchair/luggage space? They probably only furbished a small part of the inside for the model.
B

I believe the trains will be pressurized, just like the Pendolino's, Eurostar's and TGV's. The surface area doesnt have a great deal of difference in a blowout, it's the strength of the frame holding the window in place that matters.

Coxster said:
Wheelchair/luggage space? They probably only furbished a small part of the inside for the model.
Click to expand...

Looking at the photograph, there appears to be some fold down seats, so presumably it is for a Wheelchair space.

Is this better, clearly wheel chair space I would say. (Colin Marsden's photo from the Railway Herald.)

The seats look horribly uncomfortable. However, this appears to be the norm with modern trains unfortunately - also I imagine window

eat ratio will be awful, which also seems to be the norm in modern trains. Why is it we could do simple things better 30 years ago (eg, mk2's having every seat to a window). Also, according to the Evening Standard, the "Javelins" don't have such luxuries as tables - so no where for the "suits" to put their overpriced Starbucks coffee!

Easy with the comments, as its actually a very hard design to cater for. Only made worse by the Olympic requirement.So with that you need the followingAll in a 5-car set!