AndrewE said:
On top of all the debate about original colours there is always the problem of computer screens displaying a variety of shades depending on how they are constructed and set up...
Click to expand...

That is also a factor - good point.

Peter C said:
Oh OK - so the paint just went over the dirt? Interesting. Though, given the state of some engines (and BR in general) in photos from the era I've seen, not surprising!

not just locos, ships as well
Its been documented elsewhere that when the Manx Viking was put into the JV with the Isle of Man Steampacket, they just painted the black over the blue.........no undercoat, they didn't even bother to wash the dirt off or prime the rust spots. The Tynwald (aka Antrim Princess) always looked like it had been treated the same way
R

Peter C said:
Those photos do show how the same colour can look completely different depending on all sorts of things. Thanks for posting them.

and a key point is none of them look like the greenish tinged blue that I remember.........but I have to temper that by saying my two eyes see colours slightly differently anyway
R

Peter C said:
Oh OK - so the paint just went over the dirt? Interesting. Though, given the state of some engines (and BR in general) in photos from the era I've seen, not surprising!

go back to post #9
that picture of the 27 with the paint plastered over the top of rust and filler is pretty typical of how locos were treated when painted at their sheds, especially later in their lives. Locos painted at works would be usually stripped back to the metal and look much tidier.
Also the greenish tinge in that photo is much how I remember the colour: modern electronics are far better at rendering colour correctly than wet film

Flickr is useful as there are thousands of photos of the BR Blue era on there. It gets interesting when two people upload photos of the same event: 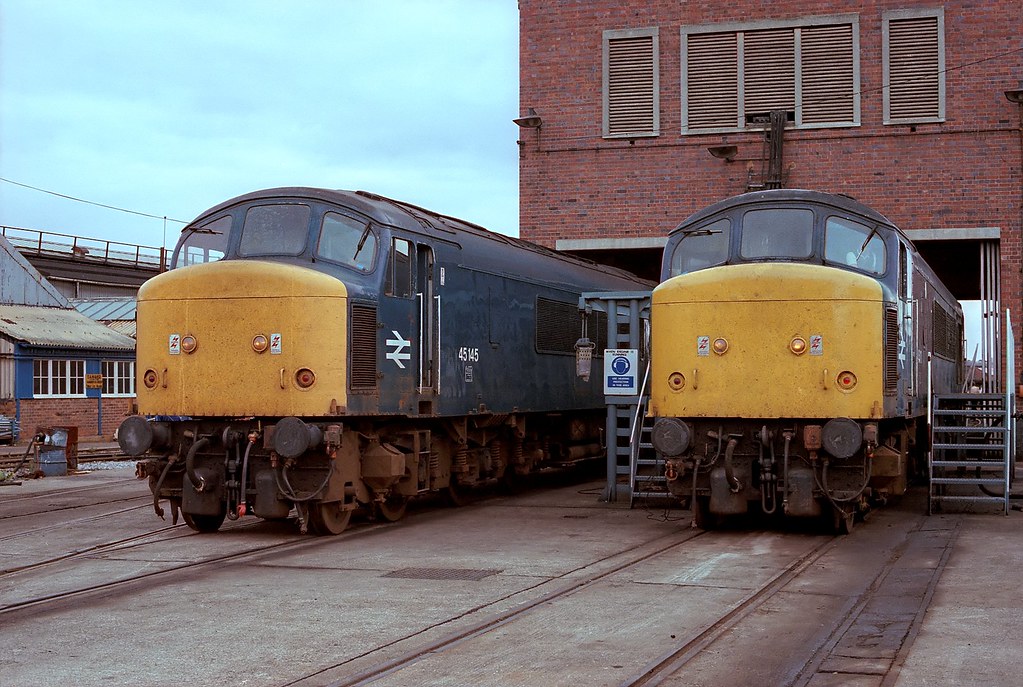 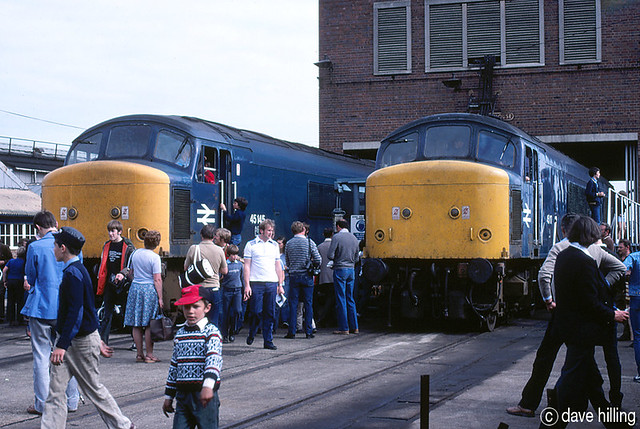 Alanko said:
Flickr is useful as there are thousands of photos of the BR Blue era on there. It gets interesting when two people upload photos of the same event:

That’s a very interesting contrast isn’t it? To my eyes the first photo looks more natural, but only if I don’t stare at the second one for too long!
R

Cowley said:
That’s a very interesting contrast isn’t it? To my eyes the first photo looks more natural, but only if I don’t stare at the second one for too long!
Click to expand...

Alanko said:
Flickr is useful as there are thousands of photos of the BR Blue era on there. It gets interesting when two people upload photos of the same event:

While some people are in short sleeve shirts, one lad can't bear to part with his anorak! If you look at the dayglow red of the lining, plus on that young lad's cap, it is clear that the colours are all over the place in the second photo.
A

You can see another railway's colour consistency here: https://www.railforums.co.uk/threads/1-3-of-hokuriku-shinkansen-trains-submerged.193495/
Blue is the colour, too!

randyrippley said:
second one is clearly "wrong" - even the brickwork is off colour
doesn't make the first one "right" though
Click to expand...

The second one has clearly suffered from age and has a slight light blue colour cast over everything. I have seen similar happen with some of my older pictures.
T

Firstly, in those times it was very common for users of better cameras to have Lens Filters, of which there was a huge range, entirely to adjust the way colour was represented on the film.

Then, different films rendered colours different ways. The best was always Kodachrome, which had a patented process nobody else could use, and which you had to send away to a Kodak lab for processing, the local shop couldn't do it. Among other things, this always rendered blue sky/white clouds far more strikingly than other films. In the USA "Trains" magazine even nicknamed such photos "Kodachrome skies". Kodak later introduced Kodacolor, cheaper and the local lab could do it. Results notably different. I bet the 08 picture above with blue sky/fluffy clouds behind was taken on Kodachrome.

Blue was always the "difficult" colour. You only have to look at all those nice summer day photos, including above, to find that the blue sky has rendered a milky white. In fact one of the key decision points behind the 1964 BR blue livery was that ICI had finally developed a blue paint which was more colour stable than what had gone before, and thus it seemed "trendy" for the consultants to recommend it as something which broke with the reds and greens used previously. But it seems the new pigment was not all it was cracked up to be.

Paint is of course dependent on the previous colour not showing through, otherwise undercoats and multiple coats would not be necessary. Most locomotives were green previously, and dependent on what thickness was used, and in those days there was still mostly imprecise brush painting, the final result would differ. Small differences in the amount of thinners etc used would also impact the colour precision.
G

Peter C said:
You are very welcome for the info on here.

The photo isn't showing up for me - I'll try using the code bit from your post in my post here and see if that works: 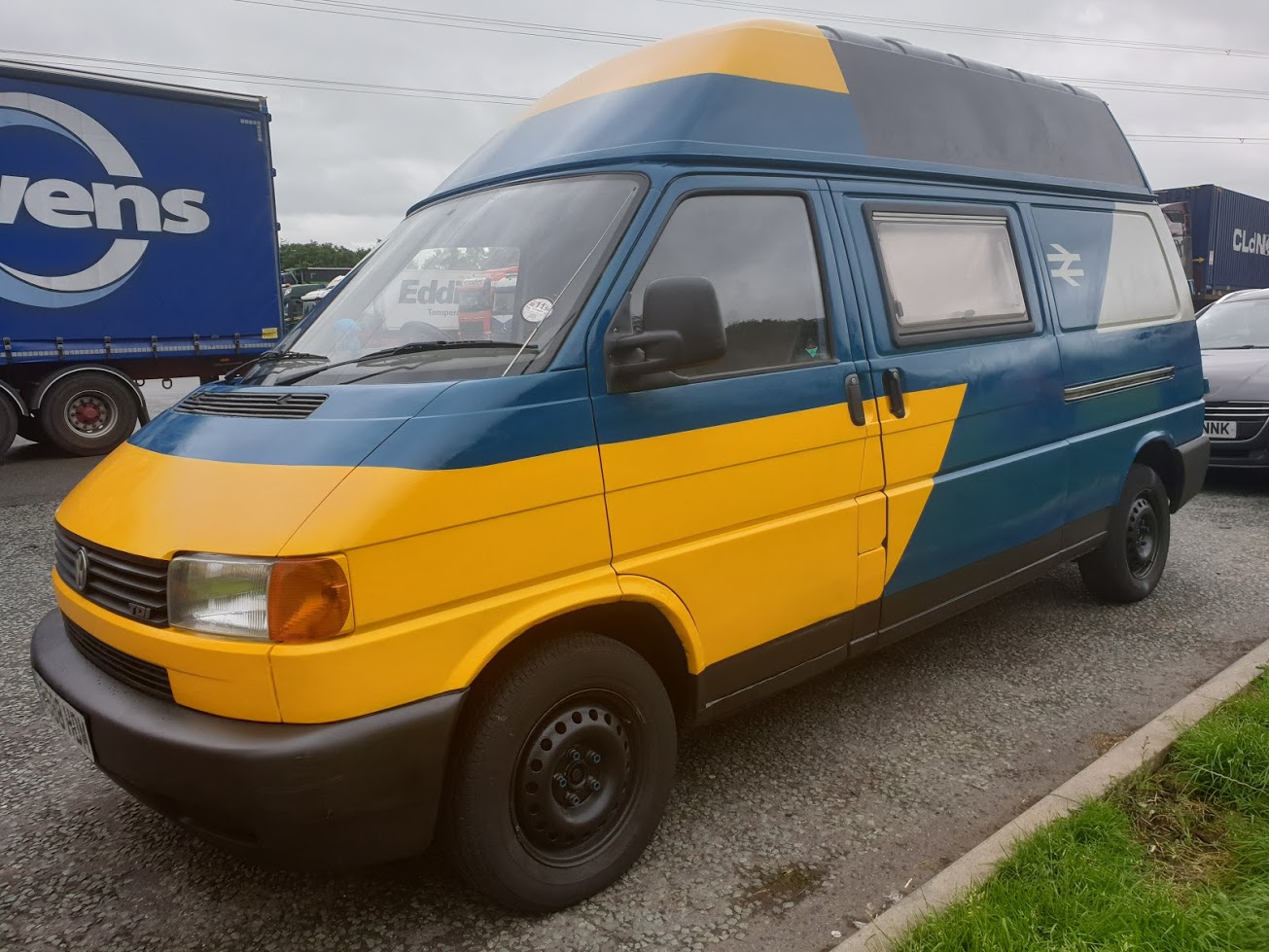 EDIT: Turns out it doesn't.

Could you re-upload it maybe please?

Oh cool - thanks for the interesting information. Everything we can find out about this topic is important in getting an understanding of what was happening with the colours!

It was a permissions settings issue, Ive changed it and hopefully the image should be visible now.
This thread just gets better and better with the amount of technical information being shared / discussed. Thanks all!

It was a permissions settings issue, Ive changed it and hopefully the image should be visible now.
This thread just gets better and better with the amount of technical information being shared / discussed. Thanks all!
Click to expand...

You're welcome regarding the thread - it does make for interesting reading!

I was at the Bo'ness Diesel Gala Day, and was reminded of this thread!

Two 26s, two shades of blue! The paint on the background machine looked like it had a yellowy bloom to it. I've seen similar on aged single stage car paintwork. At a guess a bit of careful buffing and polishing with an abrasive compound would bring it back from the dead! Tom Clift in the foreground is a bolder shade of blue with less of the same bloom apparent, though check the cab roof.

The paintwork on 27001 looks the freshest, albeit quite clearly applied with a brush over various layers of older paint.

For reference, there was a beautiful O gauge layout setup in one of the grounded coaches outside. I saw both a Deltic and 20 on this layout, and both were in very dark shades of Rail Blue. As I've noted before, the modelers are angling for a darker shade of blue with no yellow content to it at all. For once I think the blues in my photos here are pretty close to what I saw with the naked eye.


Sometimes the colour can go off-piste in real life as well....