The current issue of Rail magazine (923) has an article on the Deltics. At the end of the 1970s and beginning of the 80s, after being displaced from the top ECML services, they were used elsewhere for a few years before being withdrawn.

Once the full East Coast allocation of HSTs was available in early 1979, class 55s were reassigned to semi-fast services between King's Cross-York-Edinburgh and to Hull. Other destinations included Cleethorpes, Stockport and Liverpool from York and Aberdeen from Edinburgh.
Click to expand...

It's not clear how many destinations are meant to be covered by the words "from York". Presumably Cleethorpes means from KX; Liverpool obviously means the north trans-Pennine route; but what's all this about Stockport? Stockport from where? There wasn't a York-Stockport service via Stalybridge, was there?
R

22.xx York to Shrewsbury / Aberystwyth postal service, with some passenger coaches too. The loco came off at Stockport to come back on the reverse working.

alistairlees said:
22.xx York to Shrewsbury / Aberystwyth postal service, with some passenger coaches too. The loco came off at Stockport to come back on the reverse working.
Click to expand...

21:50 according to this picture. Could have changed in different years of course. 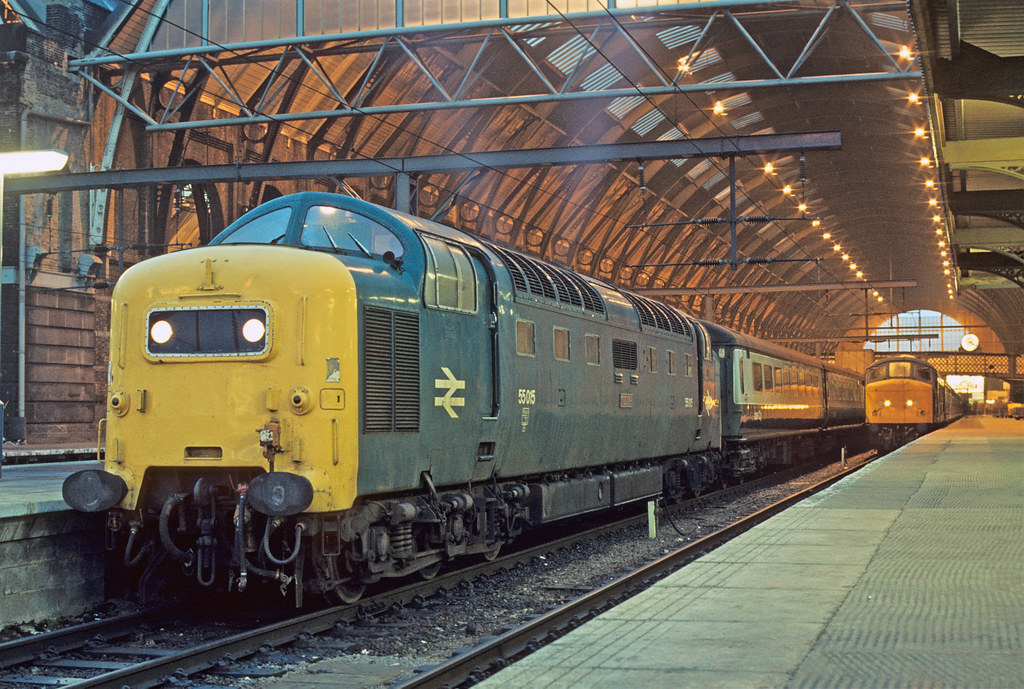 Ah, a wonderful train, on which I spent many hours of my youth!

2150 York - Shrewsbury with a portion for Manchester. York loco and traincrew to Leeds, Leeds traincrew to Stockport and return. The balancing workings were the 2250 Shrewsbury - York and an 00xx Manchester - York (?) newspaper train, which conveyed a BSK for use by newspaper sorters - but not an advertised public service.

The loco workings were a right mess too. The loco setting off from York would work to Stockport and back to Leeds. If it was a Deltic it would be used on one of the Leeds - Kings Cross am services, or occasionally straight onto the 03:00 Leeds - Hull to get a Deltic to Hull for a Hull - Kings Cross working. Any old loco off Holbeck - with or without heat - would work the last leg forward to York. The Stockport - Crewe leg was booked for electric traction. After Crewe it was a 47/4 to Shrewsbury.

The Stalybridge - Stockport route was notable too, in that between Stalybridge and Guide Bridge there was a weak bridge, so loco-hauled trains were (at that time) barred from that route. Instead the train ran via OA&GB Junction and Denton Junction. The Stalybridge - Manchester Victoria portion could be a 25, 40 , Peak, or 47 - whatever was available prior to working a newspaper train out of Manchester. One night I saw an 08 work the portion, but I only saw it as I departed for Stockport, otherwise I would have jumped off and had it!

Departure time from York was 2150 for many years. The train was booked to run at a maximum speed of 75 mph because once per week it conveyed a 4-wheeled van on the rear, conveying the dirty laundry from the York Royal Station Hotel to the BTH laundry in Manchester! Once this traffic was lost, the 75mph limit was removed, and the departure time became 2206. With some rescoping of the TPO network it later became 2234, and some sense eventually prevailed when the trains were diagrammed for through class 47/4 operation York - Crewe / Shrewsbury.

Attached timetables for the York-Shrewsbury services for part of their route in case it's of interest.
EDIT: May 1977 to May 1978 CM working timetable
EDIT: By this date, the restriction

"must not convey four or six-wheeled vehicles" applies (however, the timetable shown only covers the route segment between Crowthorne Junction and Crewe, so the service could have conveyed four-wheeled vehicles from York if they were detached earlier, I will hopefully get a matching CP WTT in a few days which might make this clearer), and indeed the service is routed to avoid Guide Bridge as CW2 noted.

I caught that Manchester Victoria-York service in February 1980, after having seen the Clash at the Apollo, the lights didn't work and it was freezing
S

Further to my post 5 above, here are the timetables for 1M41 and 1E24 between Diggle Junction and Stalybridge, showing also the additional trains to Manchester Victoria mentioned.

EDIT - as with post 5, the extracts are from the May 1977-1978 working timetable; CP this time which I recently obtained using eBay.

As was mentioned, 1M41 has restriction