An early start at 06:00 came as a bit of an unwelcome surprise at the time, but it was definitely worth it for what was ahead. As we already had our tickets, it was easy enough to get to Ashford station for the 07:43 to St Pancras. As we walked up to platform 5 we saw two 375s standing in the same platform, each bound for destinations in the opposite direction; Canterbury West and Victoria. Looking back, apparently theres an empty stock move from the Hitachi depot to platform 5, where the train divides with the front portion heading to London and the rear to Canterbury. 395016 rolled in on time and provided the journey up to St Pancras. We observed Stratford International covered in adverts in time for the Olympics.

With plenty of spare time at St Pancras, we found a good spot outside Camden Food and we got two coffees which provided a pleasant boost to start the day properly. At 09:50 we walked across to the ticket barriers and waited a short while before our train, the 09:15 to Nottingham, began boarding. To coach E we went and found our reserved seats and made ourselves at home for the journey.

On time at 09:15, we departed St Pancras with 43048 on the front and 43058 on the rear. With the first call at Market Harborough, it was a fast run and a pleasant journey. I do think the Midland Main Line is perhaps underrated in its beauty, especially north of Luton. Market Harborough seems a small place for inter-city services to stop at and I believe the platforms are short enough for HSTs to require SDO. After stopping at Harborough, we called at Leicester and East Midlands Parkway before arriving on time at Nottingham at 10:59.

We headed to the north end of the platform to take photos of the power car that led us north. We soon discovered that little departs north from the station apart from services towards Lincoln and Grantham (of which the line to the latter was not running anyway) as well as ECS movements to and fro Nottingham Eastcroft. 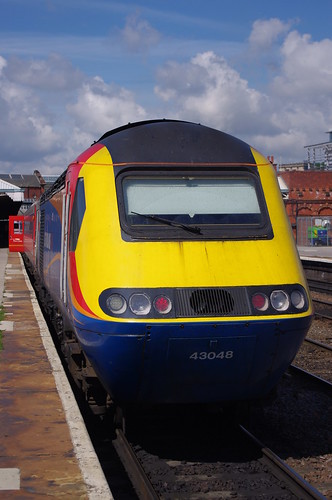 43048 Portrait Profile at Nottingham by TheJRB, on Flickr​
Ten minutes later we decided to investigate the Nottingham Express Transit system and followed the signs. We were surprised when we saw that it was only a short walk across the bridge and up some stairs to the Station Street stop. Immediately greeted by bright red Jubilee liveried unit 211, it was out with the cameras to grab a few photos.

Having seen a few trams come and go, we thought it best to return to the main station and find platform 6 for the 12:08 Cardiff Central service. It was quite a wait on platform 6 because although our train was present, it was being cleaned and prepared for the next journey and there were people gathering on the platform, a little confused. It wasnt too long though before we entered 170522 and sat down for our run to Burton-on-Trent. The first booked stop was Derby, but we were momentarily held at Sheet Stores Junction (according to the rail atlas). We were shocked at the amount of locomotives at Derby RTC with an array of 37s, 31s, a 25 and two 73s present. At Derby there was only a short time taken to reverse (Eastbourne are welcome to take note here!) and we were away again. Passing through Peartree and Willington at speed, we eagerly awaited the Nemesis sidings at Burton. The sidings didnt let us down with a great number of 56s, a few 37s and 47s and a couple of 20s, 33s, 08 and 09 shunters too.

Alighting at Burton-on-Trent, we were impressed with the way in which the station was presented with plenty of benches, shelter and a large patch of trees, bushes and flowers surrounded by informational posters, which was a nice touch. You really could have a picnic there! 43285 led 43366 through at high speed and a couple of delayed Turbostar workings arrived and departed before our next train arrived. We waited for the 13:27 to Aberdeen because we knew it would be formed of a Voyager (yes that honestly is the truth) as we hadnt sampled one before and wanted to see what the fuss was about.

221132 provided the trip back to Derby and at first we werent expecting it stop as it entered the platform so quickly. We found seats without trouble with a good view out of the window to capture the contents of the Burton yard. The acceleration was noticeably fast and the journey was uneventful apart from the brief hold outside Derby. My thoughts on the Voyager we travelled on for the admittedly short journey is that the smell of toilets is there but no worse than a Pendolino; the windows are large and provide a good view when you get it; the interior seemed quite airy to me, yet suitably private in the airline seats. The only complaint I have about the Voyager we travelled on it that there was a constant rattle from overhead, which although stopped while I touched the luggage rack, proved annoying after a while.

At Derby, we crossed to platform 6 to take photos of 56312 and 56311 which were sitting just beyond the end of the platform in the adjacent siding. Whilst standing there, I heard a familiar sound in the distance and before long 66093 appeared with a reasonably long Margam bound steel train. 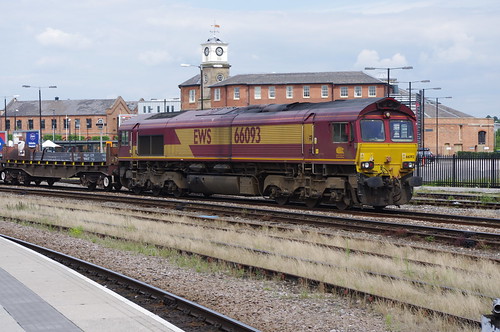 66093 at Derby by TheJRB, on Flickr​
It was then over to platform 3 where our next hop would originate. 170114 was already standing in the platform, but we wanted EMTs 14:24 to Nottingham. Even after 170102 reversed heading to Birmingham, 170114 was still there and remained for a while after. Shortly after there was a platform alteration announcement informing us that the 14:24 would depart from platform 4 instead.

After deciding too late to jump on 170114, we walked back through the subway to platform 4 and grabbed seats on 153302. Just prior to departure, three 37s appeared having come all the way from Carlisle. On time, the right away was given and with a loud roar we were away. This was a great journey with about half the windows open providing a good opportunity to listen to the 153 working hard. When we passed whistle boards, everybody knew about it! There was around a two minute wait outside Nottingham before we arrived at platform 3b.

Only a couple of minutes later, 158790 arrived from Leeds, making itself the first Northern unit Ive ever seen. I dont know whether its luck, but Im always happy with my photos of 158s; I think theyre rather attractive trains. Back to platform 4 we went and just as we did so, 43081 and 43047 arrived at their destination. I went down to the north end of the platform to take a photo of 43081 as it would be tailing our return to St Pancras.

We found our reserved seats in coach C and departed a minute late. Although the seats beside us were both reserved from Nottingham, nobody turned up. By Market Harborough, we were four minutes late, but it was from there that we could make up lost time. The atmosphere in our carriage was definitely one of sleepiness and I was getting quite tired too. It certainly was a fast run south and passing special liveried 319215 near Kentish Town, it became obvious that we were going to get to St Pancras on time. We arrived at platform 3 at 17:11, two minutes early. Leaving the train and heading to the barriers, we noticed the driver leave the cab. My grandfather asked him how fast we had travelled and he replied 110 mph and that it would have been 125 ten years ago. We then talked about how the HSTs have lasted exceptionally well for their age and joked about whether the Meridians will last as long.

I bought us teas for the journey home as wed had enough coffee through the day and we returned to the Southeastern platforms where (as usual) our tickets wouldnt work the barriers so we had to seek assistance (while carrying bags and teas). The normal speedy run down HS1 with 395011 (making it my fourth journey on this unit; how difficult is it going to be to travel on the last few 395s?) left us back at Ashford International at 18:20 just in time to see 47798 lead 47850 north on a tour from Canterbury back to Norfolk.

Another great day brought to a good end with a great deal of locomotives seen and with lots of photos and videos taken too. A total of 419 miles and 12 chains over seven journeys and two new classes of train travelled on (43 and 221). Photos from the day are here with videos here.
R

Glad you and your grandfather enjoyed your visit to the East Midlands.

The Nottingham trams will soon be passing over the station on a viaduct once the lines through to Chilwell and Clifton are constructed and opened, work has now started at the station for this - much will no doubt be done during next summers Network Rail upgrades on the signalling and station itself. Really enjoyed looking through your photos - I must agree that 158s are very photogenic units!

Thanks for sharing this report

trentside said:
Glad you and your grandfather enjoyed your visit to the East Midlands.

The Nottingham trams will soon be passing over the station on a viaduct once the lines through to Chilwell and Clifton are constructed and opened, work has now started at the station for this - much will no doubt be done during next summers Network Rail upgrades on the signalling and station itself. Really enjoyed looking through your photos - I must agree that 158s are very photogenic units!

Thanks for sharing this report

Interesting - I didn't know about the tram project. I can imagine there certainly must be a lot of work involved with doing that.

I'm pleased you enjoyed the photos and thanks for taking a read.

I know someone has said it before, but the inclusion of the pictures to the report add a real added dimension!

I know someone has said it before, but the inclusion of the pictures to the report add a real added dimension!

Thanks! I first added photos on a bit of a whim but I'm pleased it's worked. Writing these reports can be a bit daunting but I find I always enjoy writing them after a while and I'm pleased others enjoy reading them!