Why does the entreprise fail so much. I took two trips recently and both times the service had failed however I do think its not happening as much now.
R

In simple English the engine overloads as it has to run the train and provide HEP to the train. It puts the loco's under a great deal of stress which is why they fail a lot. To avoid this the loco are changed around often and any loco that operates the entreprise will operate on the Mark 4 on Cork line which HEP is not supplied from loco and on Freight servces from Dublin to Waterford and Ballina to give them a break.

Currently Mark 3 generator are being/had a refurb and will operate on the entreprise soon which will greathly help the loco's. There was a test run recently and all went well.

Why do the locos keep failing? Surely providing HEP for significant amounts of time was in the specification when they were ordered?

I thought they were similar in many ways to Class 67s which have no such problems?

HSTEd said:
Why do the locos keep failing? Surely providing HEP for significant amounts of time was in the specification when they were ordered?
Click to expand...

You would have thought. Post two answers both your questions though.

A mismatch of locomotive and rolling stock, hampered by a generation in which there has been almost complete shift from loco-hauled services to DMU operations thoroughout Ireland (north and south). Plus the de Deitrich stock used on the Enterprise are odd balls... Not much commonality with other fleets and certainly not enough to ever run hourly services.

James P said:
Why does the entreprise fail so much?
Click to expand...

Because the engines cannae take any more!

89-763-733 said:
When the 201s wete ordered GM strongly advised the railways to include an auxiliary engine on the loco for Head End Power (ETH) but were ignored
Click to expand...

But why would this be neccesary?

Couldn't they just not use the top notch on the power selector while providing ETS? Or just derate the traction system to reduce the stress on the power plant.
400kW being used for ETS applies the same stress as 400 additional traction kilowatts.

This just seems like someone screwed up the calculations.

I'm not familiar with railways outside of the UK and Republic of Ireland, but surely 2h00-2h15 to cover 113~ miles makes it one of the slowest end-to-end inter-city services in Western Europe?
I

It is very slow but there are two main factors. Very speed restricted around Dublin Area and 90mph is max limit in NI which dosn't help.

If this really is the case isn't there calls for new trains all together or are the faulty trains relatively new?
Y

VTPreston_Tez said:
If this really is the case isn't there calls for new trains all together or are the faulty trains relatively new?
Click to expand...

You appear to have missed post #2 of this thread? Also the Rolling stock section of the Enterprise Wikipedia page may help.

The obvious answer would've been not only to use the Mk3 Genny Vans, but also the Mk3's themselves to boost the rolling stock fleet. The genny vans look well in Enterprise livery.

In regards line speed, it does tend to slow remarkably down when approaching Dublin. As far as I can tell this is due to IE prioritising local services over the intercity.
4

Cyberbeagle said:
The obvious answer would've been not only to use the Mk3 Genny Vans, but also the Mk3's themselves to boost the rolling stock fleet. The genny vans look well in Enterprise livery.

In regards line speed, it does tend to slow remarkably down when approaching Dublin. As far as I can tell this is due to IE prioritising local services over the intercity.
Click to expand...

I took the Enterprise yesterday from Belfast to Dublin and return, 10.35 out and 16.50 return - both trips arrived bang on schedule and were pretty well loaded. I payed out £22 for the return trip (including the add on fare from my local station) - so not a bad deal, and though the schedule is not the fastest, going by train sure beats the alternatives - the (express) bus takes forever and has no toilet or food/drink onboard, and driving, though now quicker with the new motorway and dual carriageway, only ends up in a traffic jam in Dublin and expensive parking - so the Enterprise wins hands down in my view. Specially when you get a bit of haulage (N'bound) in at the same time!

Is / Has anything actually happened with the Mk3 Genny Vans lately? As it must be over a year since the first one had been repainted and sent up to York Road. Just hope this doesnt become another case of the curse of Belfast York Road (Refurbish and Repaint an item of rolling stock, then store it, change your minds on it and scrap the idea altogether - Yes NIR, I'm looking at you and the DBSO!)...

As for the Mk3s, it would be nice to see them refurbished and used on the Enterprise - Might push up the reliability then!, but unfortunately Dick Fearn & co's Iarnród Éireann never seem to show any enthusiasm towards loco hauled services at all, rather preferring DMUs to Loco & Coaches*. At one point, i think they were an option for increased and upgraded Hourly services on the Enterprise, but then the problems at Malahide occurred, as well as the apparent almost overload of IE with 22000s - (6 of which are cleared for Enterprise services, along with 6 NIR C3Ks) and to top that, the European wide Financial Crisis came along.

But i hope something does indeed happen to upgrade the Enterprise service - I like the route, but thanks to a rather disastrous evening back in 2010, where i had to cut the journey short after another one of the enterprises regular problems (Surprise Surprise an electrical head end power issue which could be solved by the use of an Aux gen), I was rather less than impressed at the service it could and should well be.

*The irony of this being that in 2005, IE / NIR / HSBC did investigate the use of the then potentially redundant 7 9 Car 222s on the Enterprise service, However Dick Fearn has always never been a fan of the Voyagers or any of Bombardiers clones, hence why the design of the 22000s are so radically different and more Mk3 based.
C

082 brought two Mark 3 Generator Vans north from Dublin to Belfast today. They are due to enter service on the Enterprise by the end of the month. 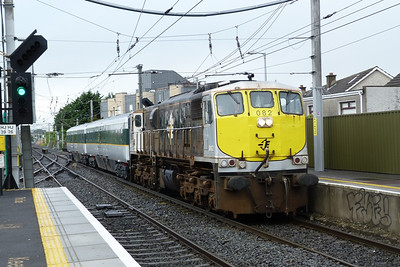 Good. I'm planning to use the Enterprise in August and it'd be nice if it didn't fail!
I

The bigger problem is security alerts.

No it isn't. Security alerts have been quite a rare event of late (on the railway at least).

As for the Mk3 generators, I passed York Road on Sunday and saw one coupled up to an Enterprise set. Looks good in the Enterprise livery though the corridor connection on the De Deitrich stock wasn't hooked up. As I was driving, I didn't have the opportunity to see if this was because the generator was only buffered up or it didn't fit. I'm sure someone who is better informed will provide the details at some point.

Sort of off-topic, my apologies, but does anyone know how busy the 0710~ off Belfast and 1900~ off Dublin on August weekdays are likely to be?
4

Not busy. Certainly not the 19:00. I've just booked a single off the Irish Rail website on the 16:50 off Dublin on August 18th for €11.99 including 'transaction fee'. The 16:50 is (or was) the busiest northbound working, and advances always dearer on this than the other trains. If they're flogging them off for such a low price it must really be a sign of the [depressed] times.
I

Irish Rail has recently changed from quota-based pricing to pricing based only on the number of days in advance the ticket was purchased.
4

island said:
Irish Rail has recently changed from quota-based pricing to pricing based only on the number of days in advance the ticket was purchased.
Click to expand...

Check. I thought it was a very good price

Thanks 4SRKT, obviously as a contrarian I'd have said the opposite

I've just realised the day I'm on the 0700~ south is a bank holiday in the Republic at least (6th): would this affect numbers either way?
I

Will probably be slightly lighter as any remaining cross-border commuters won't be using it.

Irish Rail seem to have had these fare promotions as a result of private luxury coach operators stealing market share away from them, as in a number of instances such as Galway etc, the bus is faster than the train, whilst now there are non stop buses from Cork and Belfast to Dublin by First they want to protect their marketshare.
I

Exactly. That and there is a perception of "CIÉ" being a high-fares system, so people will just drive.

Remember CIE is the parent group for Bus Éireann as well as Iarnród Éireann. While First own the limited route Aircoach buisiness, Bus Éireann cover the majority of the island.
Last edited: 3 Aug 2012