As a regular visitor to le Nord-Pas-de-Calais I pass through the Port fairly regularly.

I've always been interested in the cross channel ports and how things were done before the tunnel and specifically Dover Marine and Calais Martime.
The station building is still there, adjacent to berth 5. I believe it is still used by the port as a waiting area for the truckers and has a cafe and toilets inside. This is the only remnant of the gare, as out on the quay the platforms and tracks are now obviously long gone.

My question is about the track layout which route the line took to reach the Gare de Ville? As the port is now very heavily guarded due to the current issues with the migrants and the site is now enclosed by the perimeter fencing, which must cross the former track bed of the line into le Gare Maritime somewhere.
Does anyone happen to know where this is / was?
Would I be correct in thinking that there must have been a level crossing over Avenue du Commandant Cousteau just south of the current port perimeter fence before the lock / bridge and the line then continued along the quay round towards Calais Ville? Or maybe this road was built after the line closed in the 90's?

There are very few pictures of le Gare Maritime available on the net so as I am not a native of Calais or old enough to remember it is very difficult to tell what the layout was like back then.
Any information, memories or even better if you have any old photographs of the Gare Maritime to share it would be greatly appreciated.

Anyone who has any stories and memories of passing through Calais Maritime and pre channel tunnel days please do share them, I'd love to hear them!

Thanks so much.
R

The route is reasonably easy to trace on Google earth from Ville station, curving left along the back of Quai de la Loire (ISTR sidings there) and left again to cross Rue Lamy. I remember a footbridge - I think the road was closed - and many years ago discovering there was no direct pedestrian access to the station and ferries!
The station was an island affair with the tracks converging again at the seaward end (in that respect like Dover Marine).

The first few photos in a Google search of Calais Maritime station are worth a look.
Last edited: 13 Sep 2016

Sorry I can't answer any of your specific questions, but I travelled on the line a handful of times to and from Paris. I remember being quite surprised on the first occasion to see it was quite a short train, four coaches max IIRC, may only have been two. Nothing very fancy about it, though there was some form of trolley service with (lukewarm) cold drinks.

About 79/80 went with a youth club group to near Meringen near Interlaken this way. Direct train from Calais to Luzern. Couchettes on the way out, seats on the way back. Boat train from Vic to Folkstone, then off the ferry straight onto the train. IIRC the train was very long that at one station we had to do a double stop. Don't remember much about the station, I was quite young.

A fun time was had by all.

These two items, a map and a track diagram, may help you to put together what you want. The map is an internet download and the diagrams comes from "Nouvelle Géographie Ferroviaire de la France" volume 2 (Gérard Blier).

Thank you all for your replies.

That map and diagram are fantastic finds! Looking at the map I'd would suggest that Avenue du Commandant Cousteau came to an abrupt halt at the roundabout just before the bridge over the canal that separates the port from Calais Nord, and the line passed between the roundabout and the bridge, under the flyover (which is still in place within the port perimeter fence. But I'm just guessing, maybe a Calaisian could shed more light on this?
How old is that map? 70's, 80's??

That sounds like it was a fun trip but wouldn't fancy the seats on the return leg.. Did the München - Budapest EuroNight, "Kalman Imre" recently as far as Wien, stretched out in a six seater compartment as it was only EUR5 supplement with FIP coupons. I was then rudely awoken in the morning when it turned into a local commuter service into Wien Hbf.. Hell..!

Never again!!! I'll as always take at least a couchette in future.

Corails and a broken nose? I think the still do a loco change at Amiens on the IC's from Boulogne to Gare du Nord today.

I'll have a look at that on Google Earth and compare in with Senex's map.


Thanks, Merci, Dank u wel!

I went on it once in 1994. It was a short loco-hauled set of I want to say rib stock, but I'm not sure. The service was running as a shuttle service to Calais-Ville. Going to Arras meant moving onto a short but fast DMU, changing at Hazebrouck for a TGV (I think).

According to that it was filmed in April, '94 which is strange as the French Wikipedia page states the Gare Maritime closed in January, '94..
Lots of Corails and SeaLink ferries. You can even see the flyover about 39 seconds in so that must be the view looking south of the line towards Calais Ville.

Is it just me or is there something eerie about that video with that music?!
Last edited: 14 Sep 2016
G

According to that it was filmed in April, '94 which is strange as the French Wikipedia page states the Gare Maritime closed in January, '94..
Lots of Corails and SeaLink ferries. You can even see the flyover about 39 seconds in so that must be the view looking south of the line towards Calais Ville.

Is it just me or is there something eerie about that video with that music?!
Click to expand... 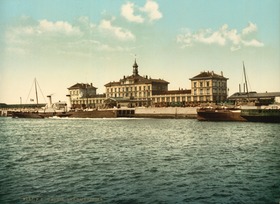 I checked the article again and you know, your absolutely right. The gare did close in January '95, not '94. I guess I wasn't paying a lot of attention

The port bus is still EUR2, 11 years on, but I quite like to stroll over le pont and down Rue Lamy, to the Place 'd Armes for a Rince Cochon in le London Bridge or Cafe de Paris and the many other fine establishments on Rue Royale aka thirsty street!

There's a few pictures on my Flickr site; don't know whether they will help at all :

The splendid 'Golden Arrow' promotional film, produced just after nationalisation in 1948, shows the arrival of 'Invicta' at Maritime and departure of the 'Fleche d'Or' for Paris. The severe war damage to Calais is briefly seen. The station building shown was hastily built after the war to allow services to recommence as quickly as possible. This was followed later by a more substantantial structure, parts of which still exist, but is now marooned in the trucking area.