Here's a news item from today's Glasgow Herald regarding the closure of the Underground in June. It is noted that this is the day after the schools break up for the summer, and that it is also at the same time as the Cowlairs Tunnel works.

I felt that the article could have been better written, but that is the quality of journalism nowadays.

Glasgow Subway staff have been told they may have to sell tickets for a replacement bus service outside stations when they shut for a month during an upgrade.

Many could also be asked to travel with late night revellers and check their tickets while work is carried out on the ramps and turnouts which allow trains to travel from a depot at ground level to the underground tunnels.

The Evening Times has learned that the service will stop on June 24 for a minimum of four weeks  sparking fears that the multi-million pounds modernisation may take longer than expected.

And workers who are protected from the public by plastic screens could now be nose-to-nose with late night travellers outside shut stations, or on replacement buses.

A letter to staff from a senior manager at Strathclyde Partnership for Transport (SPT), which oversees the Subway, gives staff two options.

One option will see more than 150 workers, including drivers, undertake temporary duties including regulating customers.

A source at the Subway said this could mean selling tickets for a replacement bus service and travelling from station to station checking tickets.

The letter from the Subways operations manager said shifts would finish as late as 11pm on weekdays and 9.30pm at weekends.

If workers select this option they will continue to receive full contractual pay, according to the senior manager.

The letter states: Although there will be no customers to serve, there are a range of duties in current job descriptions which can be carried out including stations, car parks, light cleaning duties etc. as well as additional training and competence assessments which could be carried out.

Staff have been issued with a form and told to tick option one or option two then return it to bosses as soon as possible.

The letter added: The sooner we have clarity about staff preferences for the above option, the sooner we can start advising you about what your duties will be during closure.

A source at the Subway said: Theyre closing it on the 24th of June and its a shambles. Theyve got no idea what they are doing.

Initially they wanted all of their staff to go on replacement buses and sell tickets but women were apprehensive about doing that late at night. Now theyre saying they will set up some sort of kiosk outside stations which will be shut.

Some staff will have to sit on the buses and basically regulate the bus and make sure everyone has a ticket. Or stand at stations and point people to bus stops.

That would mean wed be nose-to-nose with all sorts of people during the hours the subway operates.

They say it will be a minimum of four weeks but nothing done in the Subway runs to schedule so I wont be surprised if its six weeks or more.

It is understood the trade union which represents staff considered balloting them for industrial action but many members have already indicated which option they prefer.

A source at the Rail, Maritime and Transport workers' union (RMT) said: As it stands, SPT has put forward two options to staff.
Share article

The majority of them have now sent in replies so we cant justify having a mass meeting to discuss any action.

An SPT spokeswoman said: SPT has been working very closely with staff and union representatives to deal with the issues raised, and to ensure we are focussed on continuing to deliver excellent customer service, particularly during this period.
Click to expand...

Ansaldo/Hitachi reportedly in final negotiations for the new subway stock beating out CAF/Thales.

Is an employer allowed to suspend or temporarily reduce somebody's pay due to reasons of their own making? The article appears to suggest that could be a possibility.

What's the point of using a rail replacement bus in Glasgow when there's the current buses which run to the bus & rail stations?
M

Obviously, for a Zonecard holder or concessionary pass holder, there's no real difference. And, of course, First Bus have a much wider network than the subway. But Zonecards are nowhere near as widespread or as flexible as something like Oyster. If you are only traveling on the Subway (as lots of people do), switching to the bus would see a small but significant fare rise for a much slower service. First won't be keen to welcome passengers onboard at a reduced fare. So I'd expect that SPT operating their own replacement services at the same fares is the best option.

Furthermore, buses don't cover all aspects of the route. Whilst a Kelvinbridge - Ibrox journey would be easy on the Subway, there's no bus route that mirrors it. You'd need at least two buses and some walking. The Subway isn't all about the City Centre - people use it for lots of local journeys as well.
Last edited: 2 Mar 2016
K

It is interesting that the staff don't want to share the bus with the passengers who might be drunk, violent or anti social. I don't blame them, but its quite a recognition of what passengers have to put up with.
M

^ It's also worth noting that, whilst the Subway is very safe, that kind of behaviour does happen on the Subway. I'd much rather be on a bus than trapped in the claustrophobic tunnels and station of the Glasgow Subway should something kick off!

A consortium of Stadler Bussnang and Ansaldo to supply new driverless stock for the Glasgow subway.

Strathclyde Partnership for Transport announced on March 4 that it had approved the award of a £200m contract to a consortium of Stadler Bussnang and Ansaldo STS to supply a fleet of 17 driverless trains and signalling for the Glasgow Subway. The contract forms part of a £288m modernisation programme for the 10·5 km circular underground metro line, towards which the Scottish government is providing up to £246m. Services are due to be suspended for four weeks in July and August this year to permit infrastructure modernisation and track renewals.
Stadler says that this is the first time it has been selected to supply driverless metro trains. The 1 220 mm gauge four-car trainsets with walk-through gangways will replace the existing fleet of three-car sets, but will otherwise be built to the same dimensions. They will have space for wheelchairs, as some stations are being rebuilt to provide step-free access. Half-height platform edge doors will be fitted to all 15 stations.
The new trains are expected to enter service from 2020, and the new control system is being designed for a minimum headway of 90 sec. According to SPT, operations will switch from the current ATO (GoA2) to UTO (GoA4) 'over time', once the signalling and control systems have been fully tested. Detailed duties for all operations staff will be developed as part of the safety case submission.
‘The new rolling stock will provide the travelling public with a much improved journey experience and the system will be more flexible in terms of frequency and availability’, said SPT Chair Jonathan Finlay.
Click to expand... 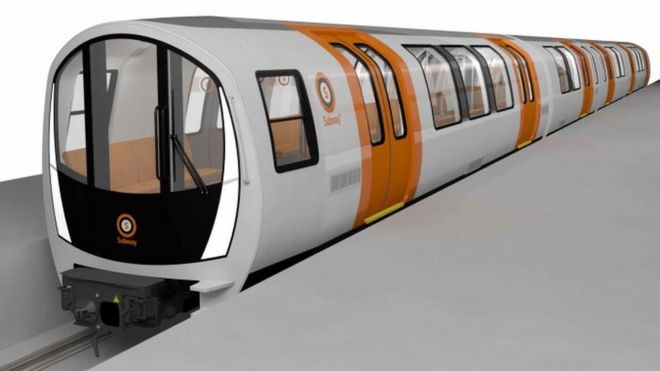 I don't know about anyone else, but I really like the design of these. Better than I was hoping for, in fact...
W

Arent they built to exact same dimensions as old stock though Formed 4 car instead of 3 car?

Will they still have staff onboard, or totally unattended?

Ansaldo for Signaling? Hmm. I hope it'll be Hitachi Kit and more reliable than some of their other projects.
E

I note it's considered a selling point that passengers will be able to see out of the front of the trains..... hmmmm.
M

I think they look really good, and looking forward to seeing them in action. I can imagine kids (and big kids like me) will be fighting to get a seat with a view out the front

Driverless trains will be introduced on Glasgow's Subway from 2020 as part of a £288m modernisation.

Strathclyde Partnership for Transport (SPT) announced on Friday that a £200m contract had been awarded to the Stadler Bussnang AG / Ansaldo STS Consortium for the supply of new trains and signalling across the network.

The trains will be the same size as current rolling stock but will run as four-car sets rather than the present three-car setup.

Open gangways will maximise the space available and allow for wheelchair access at St Enoch and Govan.

The system will include new platform screen doors, which SPT said will be "half height" to preserve space and openness within the stations while improving passenger safety.

While the current fleet is partially automatic, once the new full system is in place the Subway will move to fully-driverless operation.
Click to expand...

Interesting that they're moving to four-car stock, and hence shorter cars. I'm also curious as to how much tooling will have to be custom-made for the build, given it's the only extent 4ft gauge line in the world.
H

me123 said:
I think they look really good, and looking forward to seeing them in action. I can imagine kids (and big kids like me) will be fighting to get a seat with a view out the front

You will get a great view of the gunk on the walls and the water dripping in from an alarming amount of areas!

So the trains, if I'm reading this correctly, are 1/3 longer? Ie four carriages of the same length as the individual cars of the current three car trains?
H

jopsuk said:
So the trains, if I'm reading this correctly, are 1/3 longer? Ie four carriages of the same length as the individual cars of the current three car trains?
Click to expand...