Sod off Greenpeace - quit trying to scare everyone; go and live in a tent and eat grass somewhere in the middle of Bolivia if it make you feel safer.

Thanks for the TT though - not having Freightmaster, this is most helpful.

This is just getting ridiculous. They obviously don't now that a flask is incredibly stong, infact the article does make it sound as though the radioactivity can get out of the flask, especially when they say that these services travel close to passenger trains. Even if the train derails the flask won't spill.

As well as this they actually published a timetable for 'terrorists' to look at and see what time they can go and plant a bomb on the service, which, speeds through the stations on the timetables. They say that they are acting first to ensure the government does something but what they really have done is sped up the time it takes for an attack on a flask to happen. Just like the undercover reporter who planted a fake bomb on the flask.

Without out this where would the spent rods go. I suppose they would have them sitting around posing an event greater threat. Or go by road transport when it is much more likely for an attack on the flask to happen and much more dangerous.

Oh and I wouldn't call our rail network 'outdated'

THose are my opinions anyway, but oh well. You don't actually have to belive them (not that anyone would).

Ok, so now Greenpeace have decided to publish the nuke train's timetables, here's a link to the actualt timetables.

Scroll down to the last page, and there's a box which says "What you can do!"

Take pictures of a the train if you see it at the station? Ok so I've done that: 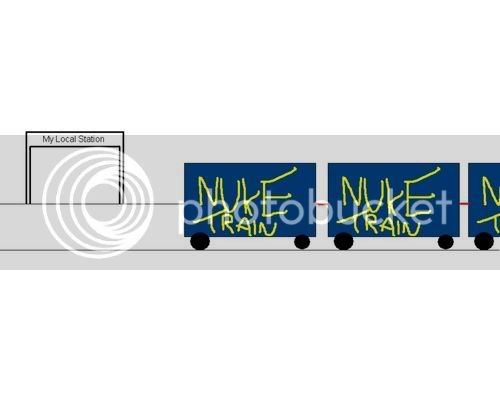 Let's all do this and send to their email address! webteam@uk.greenpeace.org

They can't even spell, or get the locations in the correct order, you look at the Bridgwater run,
Mnailsea & Backwell!
Yate
Carn & Dursley
Clifton Down

I think I may just go down to witham station tomorrow at about 6pm and take a photo of the train. I have always wondered what times the nuclear train passes through. I have only seen it once as well!

Take a picture and send it in - free advertising for your website?

What a joke - take a look at the note for the star - Days, Times and Routes May Vary

alistairtrainfanman said:
Take pictures of a the train if you see it at the station? Ok so I've done that:

Mines Better though cos it has the dead london people folk persons, like what greenpeace finks there our, cos nasty nuc trains kills peoples they does!

I only drew some wagons....

Here's nuclear cow! Don't know why I bother, the mods will never put it up...

[EDIT]
They put the picture up!

alistairtrainfanman said:
I only drew some wagons....
Click to expand...


Yea, but joe h dont find it funny, so no one else should. I also think he had a sence of humour failure at birth too. Hes like the general out of monty python's "and now for something completely different" well, he aint, cos monty python was good, and intresting, and worth peoples time.

Still only a few wagons and a station called 'My Local Station'. In all seriousness, was there anything wrong with it? And before you ask, yes I have sent it to Greenpeace.

I reckon you'll get the same response I did when I amended the GNER letter about allowing them to have Leeds paths to read along the lines of 'The ORR are right, MML should have their trains extended to Leeds instead'
G

That was kind of Greenpeace. Treehugging bastards always going a step further. So much for counterterriorism.....

Recently I was in Uxbridge where there is a company called 'Parexel' that was responsible for recent probems with 5 human tests that went wrong or something for some new cosmetic product or something. Anyway, a group of animal rights protesting and putting bricks through windows moaning about a couple of Hamsters been fed Viagra outside the building opposite Parexel. You want to know that building was? Xerox. The company who makes photocopiers. Stupid idiots got the wrong building.
X

Thanks for that, I think we should try sending that to Greenpeace?

I also notice that the Bridgwater to Crewe train via Highbridge Nailsea & Bescot apparantly only takes 20 mins Bristol Parkway to Cheltenham Spa- dep (should really be pass) BPW 13:10, Pass CNM 13:30.

No wonder people are complaining that Voyagers smell.. It's because the smelly nuke train literally runs through the 220/221 on the 12:58 ex Bristol Temple M, between BPW & CNM. (The Voyager is scheduled to leave Parkway at 13:08, with the nuke apparantly 2 mins behind it, and running a bit faster than the Voyager...)

`1 hour 10 Cheltenham to Ashchurch.. Maybe the Voyager wants to give passengers joining at Cheltenham an explanation to why it now smells of Nuke waste.
C

The chances of a leakage of radiation from an incident are so small though, that the hype doesn't come anywhere near the risk. The flasks that carry the waste have to be able to stand very serious incidents such as being dropped onto a totally unyielding surface from a certain height and placed in a fire for a considerable amount of time. The often mentioned set up collision between a Class 46 and a Nuclear flask was actually nothing like as bad as what the flasks are designed to withstand, yet was set up so that the flask was most vulnerable (the loco struck the corner of the lid of the flask). Basically, there is nothing to fear from common railway accidents such as derailments, collisions etc (including derailments into the path of another train). As far as deliberate action goes, a deliberate train crash has already been disounted, this leaves bombing and hijacking. The strength of the flasks means that a bomb would be very unlikely to cause a release of radioactive material. It's important to remember that if a bomb was placed right against the flask, only a small amount of the energy (I think about 30%) would be absorbed by the flask, the rest would head outwards away from the flask. You'd need a very powerful bomb to damage the flask enough to cause a realease of radiation. Getting a large enough bomb near to the flask would be near impossible though, and the further away it is the more the blast fades before it hits the flask. Of cource, they could vaporise the flask, a nuke would be the only thing able to do this, but then the material in the flask would be only a small part of the worry. You might be able to damage one seriously with an armour piercing type weapon or a "bunker buster" bomb, but terrorists don't tend to have these sorts of things, or the capability to deliver them (driving a tank or flying a plane to central London to attack a flask isn't going to happen). In all cases, the worst case scenario is really a small, contained leak of radioactive material, effecting the imediate area around the flask, probably no more than the freight yard or the station. Anyone near enough to recieve a lethal dose of radiation would probably be killed or seriously injured by the bomb anyway. As far as hyjacking goes, I can't think hyjacking a train is a feasable option, since trains travel on fixed paths, making them easy to intercept, and with the above knowledge of hoe sturdy flasks are, I'd say derailing the train or bombing the locos would be a good option. The only real way to hyjack the flask would be to transfer it to a road vehicle, but of cource if it's already going by road (as some would like) that's one problem solved anyway. The time and equipment needed to transfer to a road vehicle would make discovery very likely, and again I'd say that the ultimate option of "taking out" the vehicle would be perfectly feasable. Even were they to steal one, there is the question of what to do with it, since you can't exactly hide on easily, and getting one out of the country surely isn't an option.
6

Sorry mate but if I was a mod I would delete that post. Goes way too much in depth IMO...

It does a bit doesn't it. I did get a little carried away when typing that, but I'm just trying to reasure people that things arn't as bad as some would make out. Now, where has that check from BNFL got to.

6M95 Class 20 and 37 through Denmark Hill right time. Idiot Greenpeace announced through loudspeaker that a nuke was coming through from SIZEWELL. Then I talked with one of them who claims a flask leaked near Sellafield but noone got harmed... Tossers....
[EDIT]
On the plus side they offered me cash for a picture!
B

Joe H said:
6M95 Class 20 and 37 through Denmark Hill right time. Idiot Greenpeace announced through loudspeaker that a nuke was coming through from SIZEWELL. Then I talked with one of them who claims a flask leaked near Sellafield but noone got harmed... Tossers....
[EDIT]
On the plus side they offered me cash for a picture!
Click to expand...

ill do some Photoshopping for a good Price.

Which you'll pay me?

Greenpeace are really a bunch of idiots with no brain.

I agree but as long as I'm getting P's I'm happy