The idea of the game is to guess the station by the picture posted by a user...

MattE2010 said:
Anyone away from a way of replying to this thread for more than three hours and cannot leave a suitable clue (one which will help uncover the station) must leave the answer (via PM) with an online member who has contributed significantly to this thread, such as myself or 87109Chris (or any other member who is a regular on this thread).
Click to expand...

. THE NEXT PICTURE WILL THEN BE FREE FOR ANYONE TO POST.

This game has been played on other forums, rules interpreted from TT-Forums version

EDIT for the newbies who join and look at the first page:

Track Basher said:
Folks a request for players of this game. As you may have noticed from the number of posts I like playing this game and I like to think I have made a few friends here. The game is at it's best when it is fast moving with guesses coming in thick and fast and people from different parts of the country playing. You never know who is going to know which station.

We have had some classic photos the plant pot the brick in the wall etc. They are funny when posted but is anyone going to get them yes but we are going to need some help. I have put up some very difficult ones but after a few guesses it becomes obvious people do not know.

I have been to a lot of stations the reason I do quite well at this game and want to continue playing.

Over the last few days a few annoying things have happened than have brought the game to a virtual standstill. I don't think is because people don't want to play but can't for a number of reasons:

Could I make a few suggestions to make the game better for everyone. I would call these game etiquette rather than rules.

1. If you are not going to be able to say if people are right or wrong don't post the picture give the floor to someone who can. You will get a chance to post your picture at a later time. It is more fun if you are there to frustrate people with a difficult picture.

2. If you are making a guess but have no pictures to post say so in the guess. After you have won people do not want to offend and do not want to jump the queue. Let us know up front and we can carry on.

3. If you have posted a picture of the station cat on a bit of platform (I can see I am going to regret that statement in a future photo) be realistic we are not going to know where it is. It is funny the reaction when it is posted but there is no point dragging it out for 3 days. Once you get to between 8 and 10 guesses you are going to have to start giving clues otherwise you are going to end up playing by yourself.

I am really sorry for the rant but as I said I do enjoy playing and so do quite a few others here. Some of the evenings spent playing have been very enjoyable and I have stayed up too late doing so. We do have a laugh from time to time and do get carried away a bit on occasion. I want to keep this game going 10,000 posts plus.

I could be well wide of the mark here as it is my view and feel free to put your views if you disagree.

The photos have to be reasonable, don't go posting a photo of a dug out platform in a place where not even the railway exists anymore.
Last edited: 1 Feb 2017
R

Okay, good idea for a game, so let us think about this.

IanPooleTrains said:
Okay, good idea for a game, so let us think about this.

East Coast and First Scotrail would lead to Scotland so I will guess that it isn't either Glasgow or Edinburgh but will say Dundee
Click to expand...

I'm going to leave the floor open, I don't have any photos and seeing as I'm supposed to writing an essay not browsing forums I don't have time too look sorry

I know things are pretty desperate on the railways traction-wise these days, but that's going a little too far!

Since the floor's open, I'll add one. Probably quite easy but I don't have too many digital photos except ones in Northern Ireland that have been forbidden by the OP

Strood, seen as you can't get from the back platform to the right to the liner (to Rochester) from which the train is coming from, only the line straight ahead (to Maidstone West). the bridge in the background carries the line from Rochester-Swanley via Meopham I believe.
4

I also dont have a picture, so am willing for someone else to post one.

Is it Stirling?
S

you beat me to that one, i was just going to post Stirling, if you get it right, well done

i'm going too have an guess at Killmarnock?

I need to find one less obvious

I don't even know how to post a photograph, and i'm on my mobile anyway, so someone else fire away! I don't know 90019, it wouldn't have been that obvious to everyone! 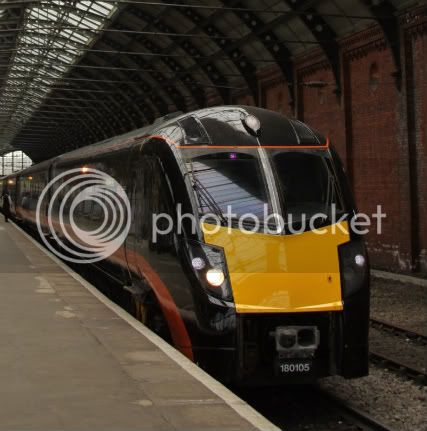 That's not Bradford Interchange is it?

If I'm right you'll need to wait until tonight for the next picture I'm afraid.

If I'm right you'll need to wait until tonight for the next picture I'm afraid.
Click to expand...

That is correct. Should have cropped it a bit more.
A

Where's Mr Mugridge with his photo then? Eh? Eh?

He did say that their will be a delay in getting his photo up, it is still tonight

transportphoto said:
He did say that their will be a delay in getting his photo up, it is still tonight

That's a tough one!