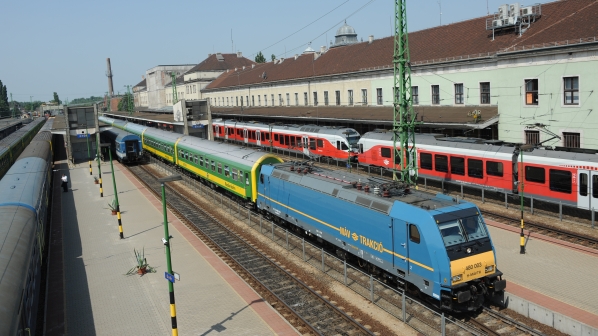 www.railjournal.com
I just wondered how many km/h is the speed limit of the HSRs, and what rolling stock will possibly be used......
R

Presumably the alignment in Hungary via Hegyeshalom will also provide a fast link to Vienna via the existing Ostbahn.
Nothing said about the line in SK/CZ/PL.
I imagine it will link into the existing "high speed" (CMK) line in Poland which starts north of Katowice and is planned to be a 250km/h line when they have fully implemented ERTMS.
I suppose it is down to the ambition of the countries involved, but Railjet speeds would seem to match their networks.
These currently do 230km/h on upgraded lines in Austria, but new infrastructure (Semmering/Koralm/Brenner) is generally being built for 250km/h with new trains expected to match that.
Plotting a route Bratislava-Ostrava-Katowice won't be easy, compared to the empty country north and south of there in HU/PL.
It's also hard to see a high speed line being built in Czechia and not involving Prague.

The scope of the work is to study route alternatives between the Hungarian and Polish capitals via Bratislava and Brno.

The Hungarian section needs to be studied in detail with proposed track geometry. The minimum line speed is 250km/h but options for 300km/h and 350km/h operation will also be examined.
Click to expand...

From a link in the article you quote. I can't imagine above 250km/h being viable.