I'm wondering if anyone has any pictures of the maidenhead signal box? it seems it was a short lived beast. it was a pretty modern looking thing. The only picture i've found is one at sunset and so is in shadow on flickr! not much help really!

Or perhaps does anyone know of any other boxes built to a similar design that may have been more likely to have been photographed?

This box, perhaps, photographed in 1959?(click on photo to go to the larger version on the Geograph Website):
Down 'Cathedrals Express' at Maidenhead

© Copyright Ben Brooksbank and licensed for reuse under this Creative Commons Licence.

The above box was at the East (London) end of the station.
N

There's some b/w pictures that include the 1960's WR 'plywood wonder' Maidenhead Middle box on ebay. Search for 'Maidenhead station'. 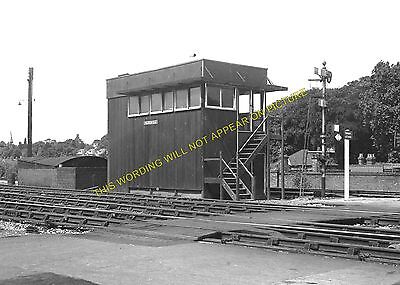 A photograph of the Great Western Railway station at Maidenhead.
www.ebay.co.uk
J

The Western Region's 'Wooden Wonders' were introduced in 1957, and became the only box style the WR used after 1961. They were classified as a 'Type 37' in the Signalling Study Group's book "The Signal Box" published by OPC in 1986. I don't have access to a complete list of these at present.
G

I think the only ones still in use are Evesham and Whitland; the latter is visible on Streetview.

Possible ones that were photographed are Eggesford, Dainton, Letterston Junction and Bargoed. There were around thirty or so, including several reuses.

And Onibury still in use.
G

john prytherch said:
And Onibury still in use.
Click to expand...

Onibury is a Type 38, which is a development of the 37. The only other Type 38 I can think of was Porth, but there may have been a few others.
M

There's a bit of a thread here:

D7078 Departs Shiplake, for Henley 310763 cr.jpg (edit - it seems you can't paste photos from another thread ) The photo of Shiplake signal box from the Stationmaster's Henley thread prompts me to wonder whether anyone has ever modeled one of these 'modern' wooden bodied WR signal boxes. There we...