BBC said:
One person was killed and about 110 were injured when two metro trains collided during the morning rush hour in Rome, officials say.
The crash took place at Piazza Vittorio Emanuele II station in the centre of the Italian capital. The trains were travelling on metro line A.

The square above has been cordoned off. Police and firemen are at the scene.

Passengers said the crash happened when one train arriving at the station crashed into the back of another.

It has been confirmed so far that one passenger has died, a 30-year-old woman.

It was earlier reported that the driver of the second train had also been killed, but the metro company denied this, saying he was seriously injured and in hospital.

Everyone on board the trains has been freed from the wreckage, reports say.

About 110 are said to have been injured, several of them seriously.

Lights at the station had gone out, and there was a lot of dust and smoke, which hampered rescue efforts.

'Train was getting closer'

The crash happened at 0937 (0737 GMT), one stop away from the mainline train terminus in Rome, reports say.

One train was stopped at the station platform to let passengers get off when the second train crashed into it from the back, leaving its front carriage concertinaed, passengers said.

"I saw the train in front and it seemed as though it was getting closer and closer to us and nothing was happening," Fabiano De Santis, a lawyer, told Italian television.

"I realised there was going to be an impact and so I managed to move forward in the carriage and I saw the train came towards me. It was a very strong impact."

Italian television showed images of victims being carried out on stretchers while other passengers emerged looking dazed. Some were spattered with blood.

"We saw people streaming out of the entrance to the tube station," Francesco Quirinis, a porter with the Hotel Napoleon, opposite the metro entrance, told the BBC News website.

"They looked shocked, disorientated, they were supporting each other. The police, ambulances - everyone was on the scene within 10 minutes and they immediately blocked off the piazza. There was a continuous coming and going of ambulances for about an hour after the crash.

"We gave them bottles of water, a place to sit down. We did all we could to help them - as anyone would."

"When I arrived at the scene of the crash and saw it, it was difficult to describe. It is a terrible tragedy," Walter Veltroni told Italian television.

"Obviously, we don't understand why this happened - they are new metro trains so therefore in absolute working order. We have now asked the metro to try to give us the necessary information in order to help understand how something like this could have happened."
Click to expand... 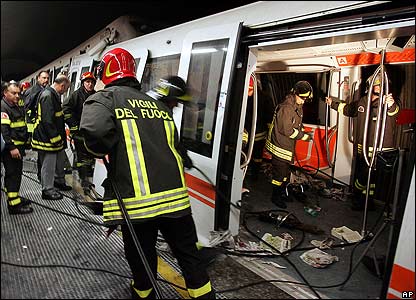 Couldn't have happened at a worse time - rush hour

But, of course, its a tragedy, no matter when it happens.

Tragic news to here from. Ok again our news reporter has been spilting out nonsense saying that when the train is at the platform, the red signal is on and said it could be the train overspeed and spad.
D

That's the media for you.

LondonBVE, this is a tragedy ... but it is most likely that it was a failure of safety systems following a SPAD!