Me and a certain character by the name of TicketMan have been out and about today 'Linesiding' on the Lickey Incline, between Bromsgrove and Barnt Green in Wocestershire!

Lickey is a 1 in 37, 2 1/2 miles of pure slog, the steepest sustained climb in the UK!! It has been notorious both through the Steam age, into deiselisation, and the 'modern' era, aswell as Privitiastion!

Because me and TM where bored, free and we wanted to go somewhere 'differant', after a short brainstorming session we came up with Lickey, because.....

1) ....its pretty local 2 both of us, and 2), cus we wanted to do a 'reccy' mission to see what locations/oppertunites/vantage points there were, so we know exactly where 2 go in the summer! And find them we did! After meeting up at Wocester Foregate Street and jumpng on a Cretin 170 to Bromsgrove, we did abit of amatuer map reading and found our way to two perfect 'lineside' spots. One of which being the very popular, yet slightly isolated 'Vigo foot-crossing' about 3/4 up the incline. The 2nd location was about 1/2 way down the incline, closer 2 Bromsgroove!

Both had their advantages/disadvantages, and even though the light was a litte bad at times and the weather..well..pretty ****e really

. we had a great day and took some great pics, even though we pretty mush got soaking wet and harassed by a strange, neddish-type gent at Bromsgrove! (it was hilarious, this guy was jabbering on about the 'old days' and then me and TM made a convieniant excuse 2 leave quickly

) Excellent plan you may think, BUT, you shoullda seen the fear in TM's eyes when the guy decided he'd follow us

hock: . Luckily, it was short lived, and he soon had 2 go in the opposite direction to us, much to our relief!

Here are a few tasters, the rest will be on my fotopic site after i have re-developed it, and im sure TM will get around to putting up his shots eventually! :roll: 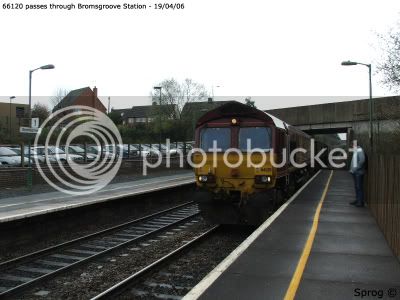 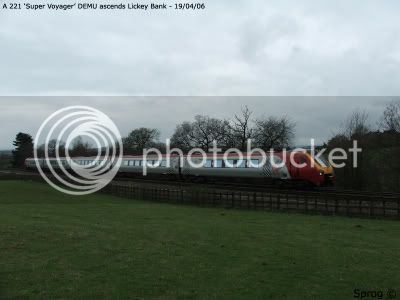 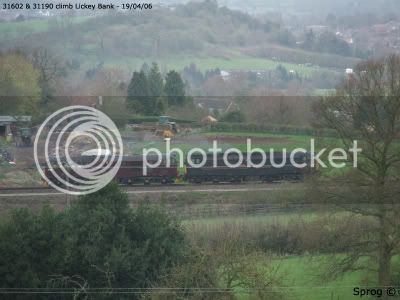 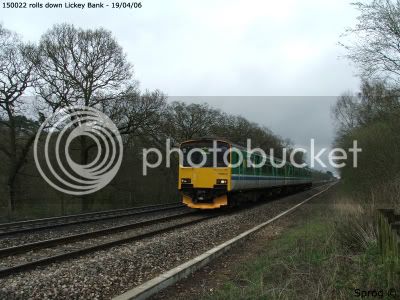 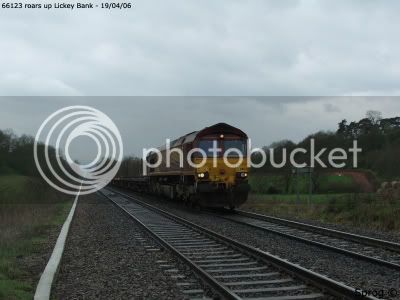 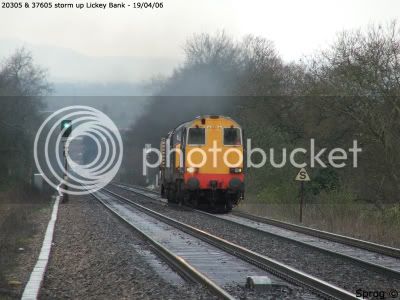 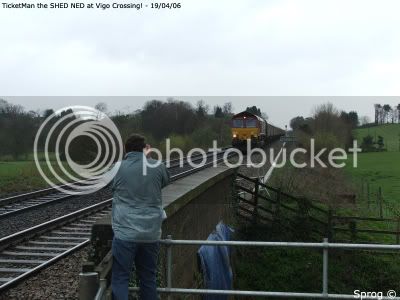 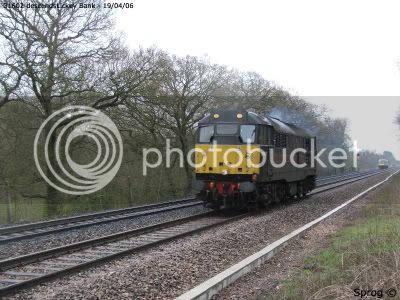 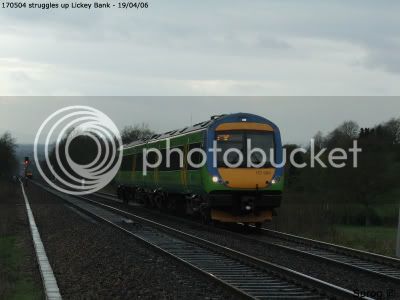 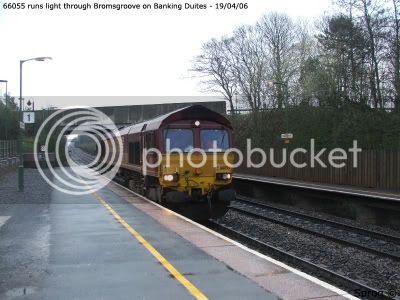 Sounds like a good day, I need to get myself to one of those spots when the HSTs come flying down/storming up Lickey!

66055 STILL on banker duties? It's always on that duty, every time I go that way!

Whoops! Corrected what i can :eek:

Thanks for the feedback so far!

Julian, me and TM are gonna arrange a proper Lickey meet in the summer.

He's gonna get all the TRUST/TOPS timings for Bromsgrove

)) and we are gonna head up there for sunrise, so we can phot all the early morning freights etc.

The bank is orinetated perfectly geographically, so that when the Sun rises in the East, it will illuminate the sides of the trains climbing the bank, hopefully making for brilliant shots. In the sunny wether, it should be amazing, especially with 60s, 66s, 37s/20s, Summer Saturday HSTs and anyother special stuff etc climbing the banks. As mentined, yesterday was abit of a 'reccy' mission 2 allow us to get our bearings. We now know exactly where 2 go for both locations now so we can guide whoever esle comes with us next time!

Its also ideally sutuated for a few of the people i have in mind, as its pretty local!

mmm, nice! Would be difficult, but far from impossible, for me to get to Bromsgrove by sunrise, but I'll be damned if I can't get there! Might require a lift from Bristol Parkway or something, but we can sort that out nearer the time.

You could always kip at my place buddy!

Im sure we will meet before the Lickey meet anyway, so thats summint we can sort in the future!

In addition to above, heres a few night-shots at Gloucester.

I had 43004 from Wocester Shrub Hill to Gloucester. Lovely ride it was too! Heads out all the way

:headbang: Then a Scud/158 formation back to Yate! 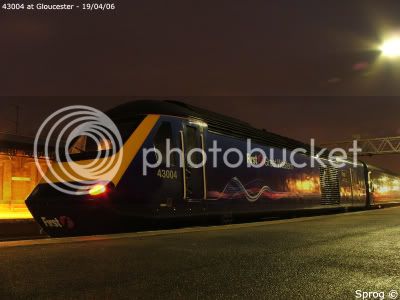 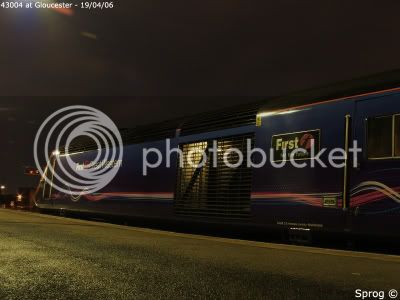 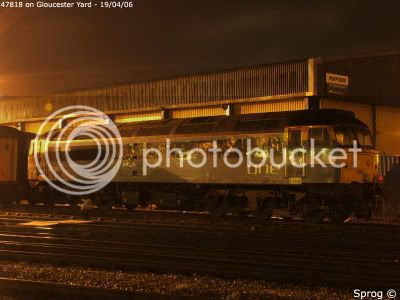 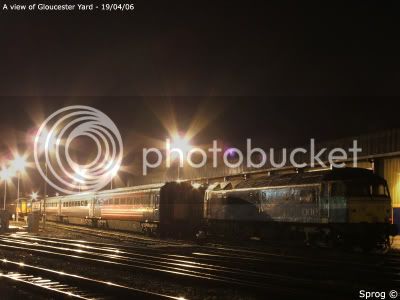 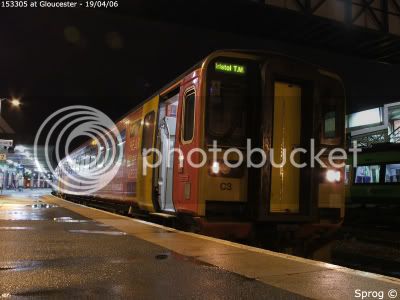 Sounds good Sprog, will arrange to meet at Gloucester, Yate, Bristol, wherever is convienent soon-ish!

S**T HOT SHOTS! Jealous you got H-O around Abbotswood Curve and saw 47818, two things I want, but meh, I'll hopefully get a Valenta around that soon enough. And 47818 can't hide from me forever!

Been thinking of visiting that area somewhen myself. The 20/37 looked like they were working quite hard; must have been a fantastic sound.

Been thinking of visiting that area somewhen myself. The 20/37 looked like they were working quite hard; must have been a fantastic sound.
Click to expand...

They where being signal checked, following a 170 that had stopped at Bromsgrove and the signal stepped up as they where climbing, so it was full throttle all the way up!

Becasue the light was so poor, i didnt want 2 risk fecking-up a closer shot, and as they where making so much noise, i decided to video them

Also, as you will see in the vid, i got a drop of rain on my lense, which would have really screwed a still shot up!

It payed off! Ill get sum stills of Nuke trains climbing Lickey on our next trip, when the light improves , the suns out and its not pi$$ing down with rain!

Also, two others from yesterday:

Aye, highly enjoyable. Wish I'd been there to see those now!