I see tfl have lumped for a design very similar to class 376 for the new ELL rolling stock. Poo. I have been told that 376's are just another plastic hornby toy. I cannot say as I have no experience. I would have thought that 377's would have been a better option given the very urban nature of the line. What is wrong with this lovely design? I like the colours too. >>

I know the through gangway need not be so prominent though. 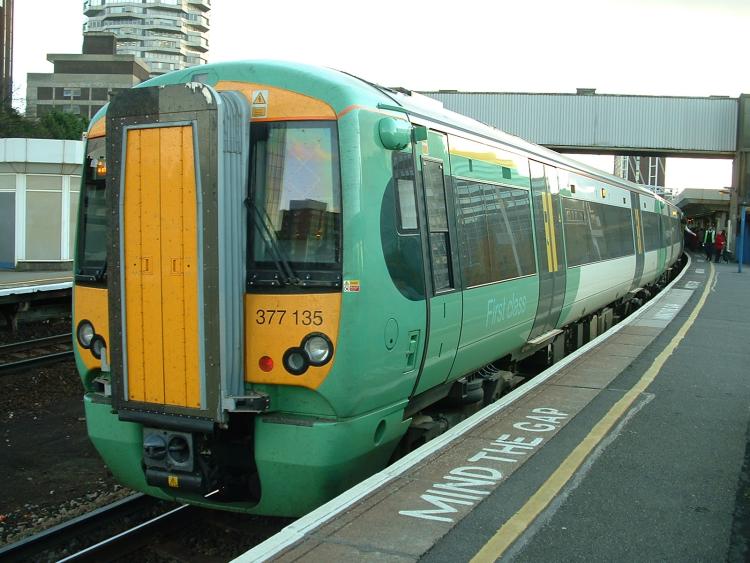 Except for the fact the 458s are fairly duff as things go, with far less capacity than the 376 derived design.
D

Am i missing something

Liam said:
Am i missing something

It is now. But not for much longer.
T

Bob, 377s would be less suited due to the fact that people are more likely to sue NR/TfL if they get a body part severed by the plug doors.

376s have traditional slide doors which aren't as powerful.
H

Tom said:
Bob, 377s would be less suited due to the fact that people are more likely to sue NR/TfL if they get a body part severed by the plug doors.

376s have traditional slide doors which aren't as powerful.
Click to expand...

Thanks for pointing that out Tom. However I can't see why a plug door should sever any part of a persons body unless they have beed stupid enough to put their hand where it should not be. Tyneside Metro have plug doors and have had them since the start. I have not heard of any severances with those [there may have been injuries though]

Again fear of being sued is another downside of modern life. If a person is injured by any bit of railway [or other organisations] kit then they were either misusing it or doing it wrong. I'll admit that in some cases accidents do happen but they are reasonably rare. If someone rushes for a train and falls arse over bollox and gets hurt they seem to think that it was the railways fault.
C

Julian G said:
I don't think most people are going to like Electrostars after what they have done

I think TfL should had brought the 458s for the ELL saving a lot of money
Click to expand...

Julian G said:
I don't think most people are going to like Electrostars after what they have done

I think that should say "I don't think enthusiasts are going to like Electrostars" because they replaced the slam door trains........

Slam doors are gone, Leccystars are here, theres owt we can do about it so quit complainin'! :hmph: :angry6:

i lived in the south eastern catchment area before, during and after the electrostars and "metro-star" 376's were introduced...

i personally feel that the 376 was better than the 375's operated by South Eastern..

i dont know why... since the seats are thinner with less padding but i find the seats more comfortable...


i think that the citzens in the areas that will recive the new 376 derived trains .. will be impressed with the improvment over the current stock used..

Introducing 'London Overground' - a new era for London Rail
London's rail passengers will soon be able to board the 'London Overground', under plans announced by Ken Livingstone, Mayor of London. The new brand, complete with its own TfL 'Roundel', was unveiled at London's City Hall today.


The new London Overground logoFrom November 2007, 'London Overground' train services will operate on the North London Railway under the management of Transport for London (TfL), when it assumes responsibility for the line from the Department for Transport.

Operating under a new TfL London Rail Concession, 'London Overground' services will also run on the East London Railway when it opens in 2010, following TfL's £1bn extension of the existing East London Line.

The contract to run 'London Overground' services on both these lines will be awarded by TfL to a single train operator, under strict conditions to meet TfL's requirements for safety, security, staffing, ticketing and train frequency.

Launching his vision for the 'London Overground', the Mayor Ken Livingstone said:'For decades, national rail services in London have been neglected and in many cases under-utilised.

'The transfer of responsibilities to Transport for London and the dawn of 'London Overground' will start the much needed revitalisation of London rail services, bringing the standards of service up to the levels of the Tube and the buses.'

The Mayor signalled his commitment to deliver a rail link at Dalston Junction to connect the North and East London Railways by 2010, ahead of the London 2012 Olympics.

This will allow 'London Overground' passengers to travel between Richmond and West Croydon via Dalston Junction and is the first step towards an orbital rail link for London.

The Mayor continued: 'By joining together the North and East London Railways ahead of the London 2012 Olympics, we will create a new rail artery around the city, serving 20 London boroughs.

'This will create new opportunities for Londoners and encourage inclusion across our diverse economic and cultural centres.

'It will also be a vital means of increasing capacity on public transport as London's population grows over the next twenty years.'

From November 2007, 'London Overground' passengers will benefit from a programme of improvements to stations and services on the North London Railway, funded by TfL's £10bn Investment Programme.

More staff at stations to provide assistance and reassurance
Oyster ticketing at all stations and more ticket gates to improve security and reduce fare evasion
A phased programme of station upgrades, delivering more help points, CCTV, better lighting and customer information systems
A fleet of new trains from 2009 that are more comfortable, more accessible, have greater capacity and the latest security features
The provision for longer trains and more frequent services in the future, subject to infrastructure improvements which are outside the remit of TfL
Ian Brown, Managing Director, TfL London Rail added: 'TfL's policy is to put passengers first and we look forward to putting this into practice on London's rail network from November next year.

'Over the next few years we hope to develop the 'London Overground' to its full potential, using TfL's values to raise security and standards for rail passengers, as we have for other transport modes in London.

'TfL's vision for the 'London Overground' is a safe and secure railway with frequent, Metro-style train services. Passengers will benefit from a better quality of service with new, reliable trains, staffed stations and Oyster ticketing to ensure consistent fares.

'We want the 'London Overground' to be as comfortable and familiar to Londoners and visitors to the capital as the London Underground. We're entering a new era for London Rail and this is just the beginning.'

The 'London Overground' brand will join the TfL family as a new orange roundel, featuring on trains, stations and maps, including TfL's world-famous Tube map.
Click to expand...

*sigh* Looks too much like the bloody tube!
G

Thats a good think! The new plans look very good, can't wait to see them! Any ideas when the system will be up and running?

Things is, it are there many seats on tube trains of that style? And it seems a long jouney! Would be better as the A stock design IMO