After a minor issue using Northern last November, I wrote to them to complain and was surprised to receive a free 2-day ticket for use anywhere on their network. I used the first day shortly the ticket arrived, but it's taken me ten months to get round to using the second day, and with it only having a year of validity, I had to get it used.

I chose Saturday 17 September, a good choice as it turned out as the weather turned out to be lovely. Saturday is parkrun day, so it was after 10am when I arrived at York station. There was a Voyager in one of the bay platforms which is slightly unusual, the Newcastle services were starting/terminating at York for some reason. 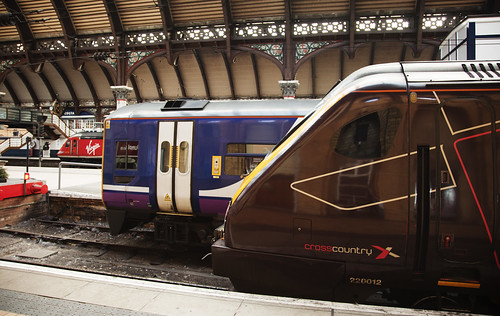 My first move was on dud 158754 to Leeds. It turned out the guard on this service was an old school friend, so we had a good catch up between his duties. It transpired he was also leaving the service at Leeds to operate a Manchester Victoria service after a short break, so I decided to head that way as well.

I got to the platform to see winner 150145 waiting, but when I'd looked on RTT the inbound service wasn't meant to be due yet. My mate had it booked as a single unit but it turned out to be a pair and bonus extra winner 150204 rolled in around 2 minutes before booked departure. It was looking unlikely we'd be away on time, even less so after a minor misunderstanding with the rear local door being left unlocked after the incoming guard exited the train, which prevented the brakes from being released to allow it to couple to 150145. Eventually this was resolved and we left around 10 minutes late.

There was also a track circuit failure outside Bradford Interchange, so we ended up 20 minutes late by the time we arrived in Manchester. I got a good overview of a day in the job of a guard and it's not the walk in the park some people think it is. After leaving my mate and the 150's at Victoria I walked over to Piccadilly, having got the taste for some more winners. 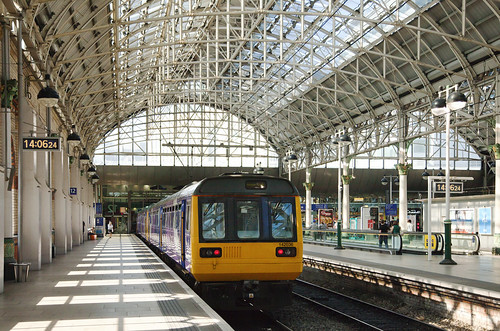 I took these to Stockport, where I had plenty of options for returning to Manchester. The first to turn up was 323233, which amused me as I'd only previously had 2 and this was one of them! I waited 5 minutes and winner 150148 arrived. I was getting into this now, and worked out on RTT if I stayed on to Oxford Road I could double back on Blackpool North-Manchester Piccadilly service. This worked out well as winner 156468 was waiting at Oxford Road when I arrived.

I planned to head over to Sheffield next, and had a short wait to took a couple of pictures. 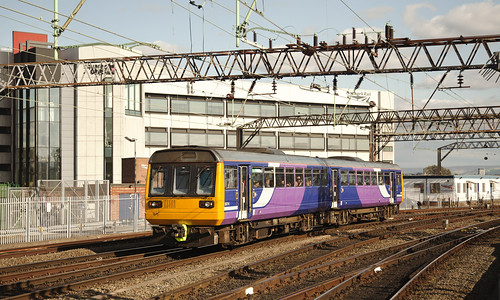 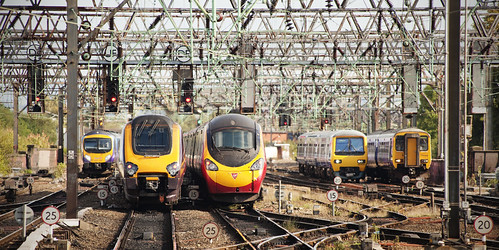 The top picture was the inbound working of my Sheffield train, which was another winner 142064. It was busy but a nice run on a route I'd not travelled before, a bit slow with the stops but I wasn't in a rush.

Had two options on arrival at Sheffield. A fairly tight +4 over the footbridge for the Leeds train, or wait for the Doncaster one shortly after. The Leeds train was 144017, which was my tenth 144 leaving 14 to get. I'll never clear the 142's before they go but I have a chance with these!

I got off at Rotherham Central, my only new station of the day, to wait for the Doncaster service 5 minutes behind. This was winner 142022. 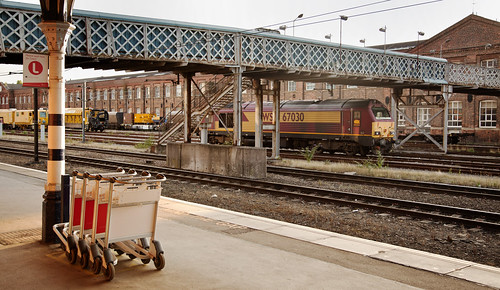 A nice sunset run on the 322 got me to Leeds in good time for the ex-Blackpool North service. Having had a lot of the 3-car 158's I wasn't expecting a winner, but I was wrong as 158755 turned up. I boarded in the centre car which was in complete darkness and quite warm, the engine also sounded a bit poorly and actually cut out altogether at Micklefield. The guard managed to fix the lights temporarily but they cut out again shortly after. Was quite nice in the dark, you can see a lot more outside!

Final pic of the day from Leeds... 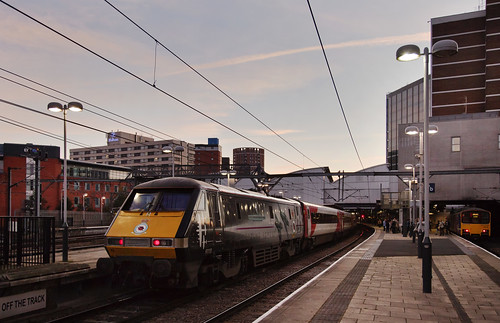 Good day out indeed - I love the photos, looks like you take a proper camera with you?

Good to get some winners in the bag too

Sent from my iPhone using Tapatalk

Thanks, yes I use an SLR which is admittedly bulky to carry around, but worth it for the quality.

It was quite a winning streak in the end, only the first unit was dud! Having said that I've only recorded since 2014, and most of my journeys seem to be on East Coast or TPE.

It must have been good to bump into your friend! Sounds like a great day out was had there but I don't approve of the pacers!

I used to avoid them wherever possible but I enjoyed them on this trip. They'll be gone forever before too long!
R

Sounds like a lot of fun. it has reminded me i also have a 2 day Northern travel ticket that I also got in November of last year.
To be honest i wasn't sure whether it would still be valid after the change but it appears it must be so i will have to make use of it.

A thoroughly enjoyable day for you and an excellent read too. Some awesome scenes snapped there too, the manicness of the Piccadilly approaches is definitely my favourite.

Cheers Tech. Itching to go and do some more before the weather turns grim but strugglin to find the time. Quite fancy doing a FOSS next summer too before the HSTs are mostly replaced.

The Northern £10 offer is on at present. Two tokens from a paper and £10 for all day (post 0845) travel on Northern. Might be worth a look at for your next trip.

Whereas I've got the desire to head north to get Pacers in and some more Starship thrash before they start coming south! Not to mention chasing my last 6 185s...

EDIT: And yes, that does include during the winter!

Got a short notice trip booked for tomorrow - nothing huge, Carlisle and back dragged both ways. The 67 will almost definitely be a winner, would two 91's as well be too much to ask?!

Really good. Loved the photo taken at Piccadilly with five different types of train on the move.

A cracking read for what appeared to be a cracking day. The photo of the trains approaching Piccadilly is fantastic.