Does anyone know of places in the UK where there are till old disused tramlines still visible?

I can think of a few, all visible on Google streetview:


Any others..? I've always been fascinated by this, no idea why!

Location
Somewhere, not in London

Not tram lines, but they are embedded at Hull Railway Docks, now the Marina.

Edmund Street in Birmingham City Centre has a well known landmark of exposed original tram tracks, albeit a short section, but they are genuine!
http://www.virtualtourist.com/travel/Europe/United_Kingdom/England/West_Midlands/Birmingham-316917/General_Tips-Birmingham-Walking_Tours-BR-1.html

Cheers guys, never knew about either of those ones!

Still rails in the floor in some of the exhibition spaces in the Tramway (surprise, surprise) in Glasgow.
U

Small bit of track at the gate to Mayflower Park in Southampton.
J

Beresford Square, Woolwich, London, SE18, saw its last tram in July 1952. The tracks, mainly tarmaced over, were there until the late 1970s, when I left the area. Soon afterwards the square (used for a market) was smartened up, which included removing the tramlines. So they lasted nearly 30 years after the trams had gone!

Cool and interesting as that is, I think the OP is more about places where the track is in place in the street and visible, rather than covered over.

Isn't there some isolated track in the bus depot east of Rigby Road depot in Blackpool?
J

MK Tom said:
Cool and interesting as that is, I think the OP is more about places where the track is in place in the street and visible, rather than covered over.

Isn't there some isolated track in the bus depot east of Rigby Road depot in Blackpool?
Click to expand...

Most councils filled in tram track with tarmac for the safety of road users, particularly cyclists, after the trams disappeared. So you will only see examples of track either where some has been specifically put on display, or it was just off the highway (at a depot, for example), or where the tarmac has worn away. But the latter is extremely unusual as most roads have undergone major resurfacing works including removal of the tram lines, alas!
B

Hi there,
Last time I was using Bristol Temple Meads there were quite a few tram tracks left in the approach to the lower level / underneath the main station. These were visible looking down from the pavement going up to the main station from the road.

This was a few years ago though so I don't know if they are still there and /or visible.

I also vaugely remember quite a lot of track coming out of a bus depot in Fratton near Portsmouth. I can't remember any details - sorry.

Still a lot visible in various potholes in Manchester, particularly along Oxford Road! There were some sewage works going on outside the Palace Theatre and initially they dug only down to the cobbles and tram lines, which were still completely in situ.

Cheers for all the examples people! Very interesting!

Between Lickey Road and Elliot Gardens in Rednal, Birmingham - part of the former tram terminus of the Bristol Road route and once a large turning circle with long shelters catering for day trippers to the Lickey Hills.

Location
Neither here, nor there, but somewhere in-between!

Just off Hyde Road in Manchester, going into their old depot

In Aberdeen there was a private section of track on the Sea Beach route that was never picked up. By private I mean that the final quarter to half mile or so was separate from the road and ran into a terminal stub with a run-round loop at the beach front.

This remained as a reminder of the tramways for many years but was shortened quite a bit when a new hotel was built across the town end of the private section. 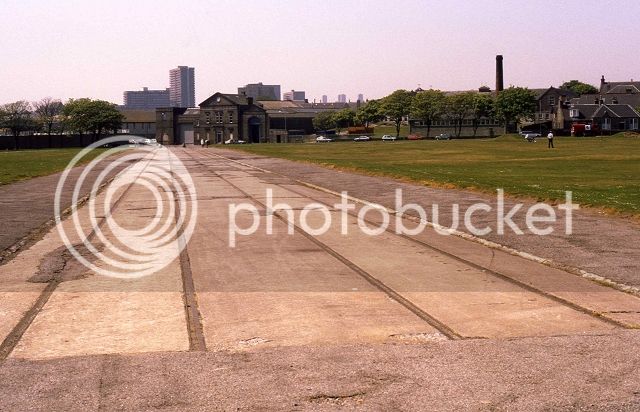 A 1990's view when the length was till complete. The building in the immediate background is the Ex Beach Tram Depot, which still remains today and is part of a Stratosphere Children's exhibition. 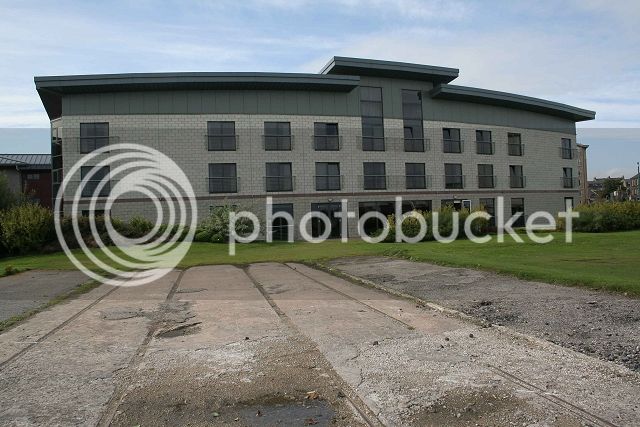 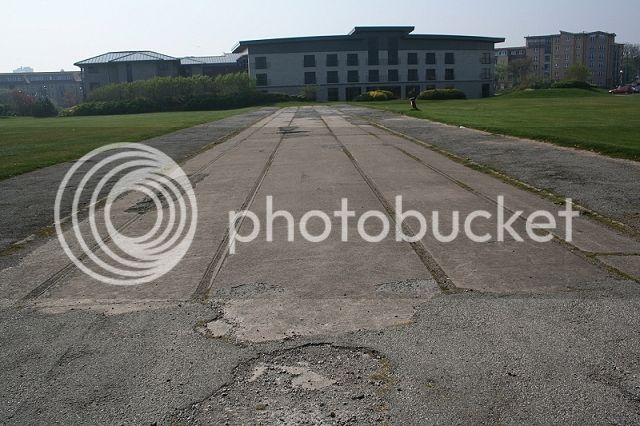 A wider view showing the amount of track that remains. From the town center at Castlegate the beach route ran down Justice Street, Park Street then down Constitution Street where it entered the private section to the terminus.

The private section of track became the funeral pyre for the trams in 1958, which were lined up along the concreted section and set on fire. Not one Aberdeen tram was saved, even purchasing items such as seats etc were refused. The 30 odd fleet of Super Streamliners that were built in 1949 were destroyed after no more than ten years of service. The burning took place at night and was not published before hand. 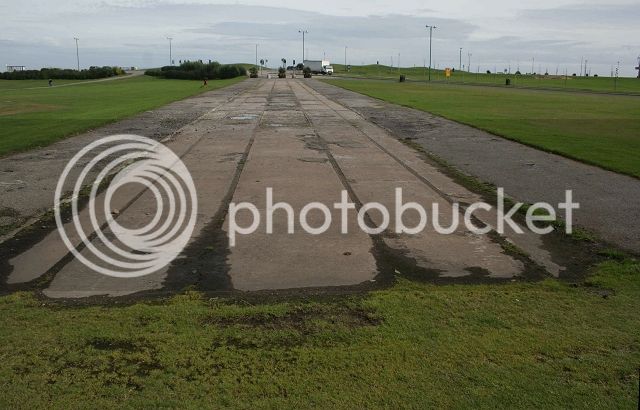 Reverse view from above. The line turned sharp left up to the terminal stub. 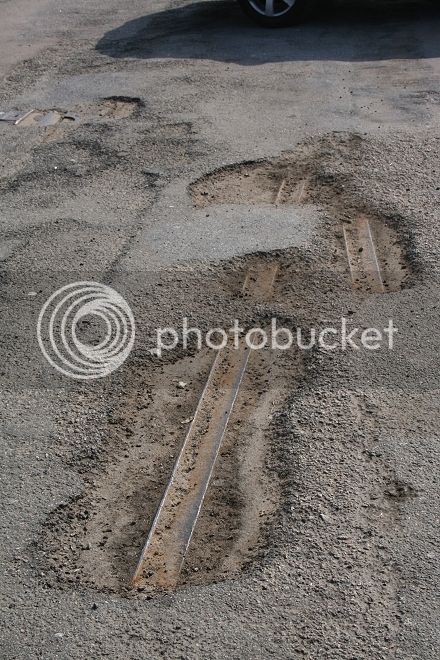 At the terminus site a section of track is showing through the tarmac, which is the points of the terminal run-round. I wonder how long these will show before they are eventually recovered with tarmac!

Another place where track is still showing is at the site of the Bankhead tram terminus at Bucksburn. Bankhead was the terminus of the Aberdeen Suburban Tramway that extended from the No. 7 route at Scatterburn (Woodside) from Great Northern Road, through Auchmill Road to Bucksburn. The surburban route closed around 1928 along with the western suburban route along the Deeside to Beildiside that followed Great Western Road. 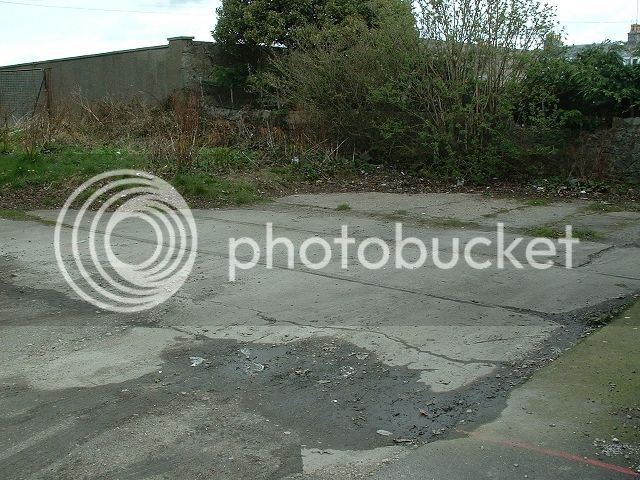 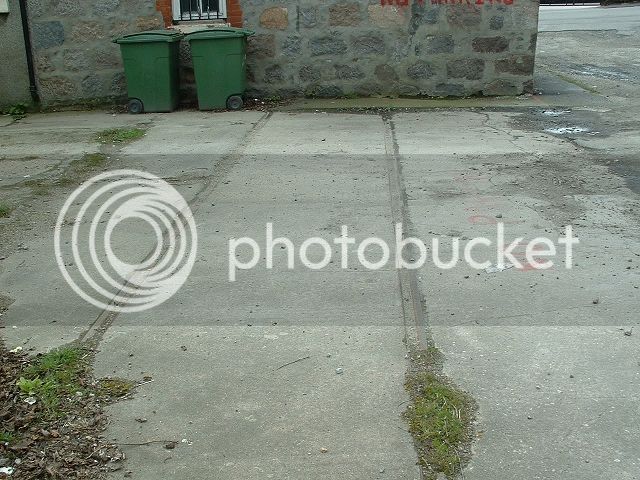 The terminus was on Bankhead Road but the Tram depot was just inside Bankhead Avenue, across from Bankhead Church. The track seen above was inside the Depot and can be seen behind what was at the time of these photos, a Chinese Take-Away shop.
D

Was the "Tramway" in Weymouth ever used for "Tram" services though? I thought it was just so that "mainline" trains could access the ferry port?

Wow so many more than I thought, thank you! And thanks for the link/photos, they're great!
S

Until recently there were still tram tracks exposed at the First (ex Chester City Transport) depot in ... well .... Chester! Not bad considering the trams finished in the early 1930s!

Not sure if they survived the closure/ demolition of the bus garage recently.

Still there on the Murraygate in Dundee, and incorporated into the precinct.

There is apparently some at Ashby-de-la-zouch station from the Burton and Ashby Light Railway that closed in 1927, however I've never got that far up on my bike, so I don't know if it's true!

I'm not sure if they are still extant, but up until a few years ago, one could see tram tracks in the old horse tram depot on Friargate, Derby.

Weymouth still has tracks in place from when sevices were run down to the docks for connecting ferry services. The station at the ferry is still in-situ and so is a siding there. Most of the track remains in place too but not all the way to the current mainline. I think that there is about 5 metres of track missing, apart from that everything is still how it was. There was plans to open it up again but the havent come to anything yet.
J

That's the "Weymouth quay tramway" already mentioned- and the real plan is to lift the rails subject to the formal procedure being carried out (apaperwork) as Network Rail wouldn't mind shot of it, there's little or no chance of services down there (no matter how much enthusiaists want them) and it would make the quay a slightly safer place if it doesn't have shiny metal/slots running along it.

The tram track and lamp standards in the Murrygate, Dundee were only built in the 90's, as far as I can remember. There were no tram lines showing until after they built the Murrygate Shopping Center.

The Maryfield Tram Depot in Dundee still exists and has been a bus depot for many years but as far as I know there are no rails to be seen. It is at the far, eastern end, of Clepington Road.
C

Belfast has a few feet left of tram lines in the docks:-

Not sure if it was used by trams, trains, or horse drawn carts. Incidentally there was once a small tram tunnel that connected the badly located Central Station train terminus to the equally crap York Street terminus, with the trains running between them on and ordinary road. What's surprising about this is that Belfast's City Centre is built on sleech (mud) so is terrible for building anything underground. Also surprising is that there is virtually no information about this link to be found, or whether the tunnel is still in place.