This is a slightly enlarged version of the trip on my website which contains a few more phots. All the photos here are linked to the home page as I'm too lazy to do individual links. Sos.

A couple of days in the other land of former Orange locos, Portugal. After much divering we had finally sorted out a trip to cover the Porto vice turns which have seen regular appearances of 1400s for the last year or so due to a shortage of the Spanish 592 carts which work the Douro and Minho routes… Only a short trip so gone for a more detailed write up style for a change.

Saturday
After the rancid o clock Ryanair from Stansted and a tram from Porto into town we arrived on Saturday lunchtime and in time to cover the 1115 Valenca. After finding the first of many working DMUs, decided to head down to Espinho on 5607 working the 1052 Porto – Lisbon, which is the 1005 from Braga as a fill in and coffee move. 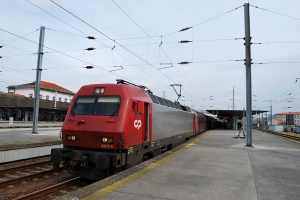 CP 5607 at Porto Campanha about to open the trips account

After a brisk walk along the Atlantic and an hour in a windswept Espinho beach hut for more coffee, 5617 returned us to Porto on the balancing turn, 0930 Lisbon – Braga. The gripper was straight on us on this one (compulsory res) but seemed happyish at FIP coupons and just said we should get a res in future… DMUs on both the afternoon Valenca and Pochino turns were a dissapointment so we headed for the first (of many) Super Bocks before taking the first (again, of many) 3400 series EMU out to Gaia to bring the 1130 Lisbon-Porto IC in with 5611 up front. 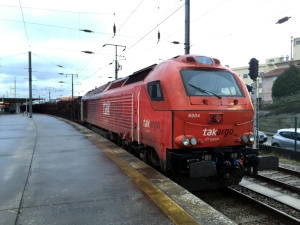 After checking in there were more DMUs to flag so we headed into Porto itself with an EMU to Sao Bento to find somewhere to eat. Dashed back to Campanha to cover the 1815 but clearly there was to be no 1400 today so we did another move to Espinho with 5608 on the 1952 Lisbon for 5606 almost straight back Porto on the 1730 Lisbon – Guimares before calling it a night after a couple of beers on one of the bars over the road. 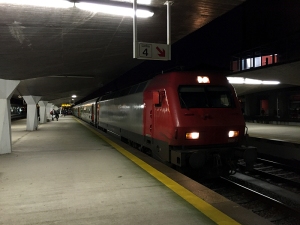 Sunday
Getting up early on Sunday was a waste of time as the morning Douro was of course a DMU. We took it out past Contumil where 1408 was stabled on a scratch set, which wasn’t a good sign with weekend work being potentially thin on the ground. Repeated yesterdays electric move, going to Aviero instead with dud 5611 out for 5618 back. Lots of euros have been spent on the mainline with the main stations rebuilt, including Espinho being put underground, yet stretches remain as bolted track, bizarre! Again the 1310 & 1315 DMUs were DMUs so we jumped on 5606 to Gaia on the 1252 Lisbon, got wet waiting for the unit back which took us into town to do touristy things (and have beers between the heavy showers that were almost like clockwork on the hour) and headed back more in hope of expectation for the later departures. DMU on the 1615, beer, pair on the 1715, but whats that, the 1815 is shown as departing from a main platform and not the bays – maybe, just maybe… After a somewhat tense fester around 1740 a big orange and white front appeared from the gloom under the Estádio do Dragão – YES! 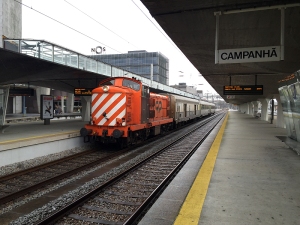 It had been 15 years since I'd last enjoyed one of these and the relief was palatable - so much that the man in the info booth gave us some strange looks! One of the CP old hands website describes 1400s as " These possess that distinct EE shrill of a Class 20 in a monstrous steeple-cabbed body of aesthetically pleasing design (sometimes known as 'Dogs' because of their looks). The first ten were actually constructed at the now legendary Vulcan Foundry (otherwise known as 'Mecca') whilst the remaining 57 were built under licence in Portugal between 1967-69" and there is not much more I can add, perhaps just a 'beast''. Anyway 1408, one of the early Vulcan Foundry built examples, duly ran round to form IR 857, the 1815 to Valenca formed of two Soreframe “Corails” and a genny van. Absolutely delighted to finally get one, we settled in for a thrash to Viana del Costelo which was as far as we could get for a unit back to Porto that night. Tight timings and faster than expected linespeed allowed the EE veteran to put in a cracking account of itself. It was a shame to leap at Viana but at least the recent clock change meant it was light enough for a phot. 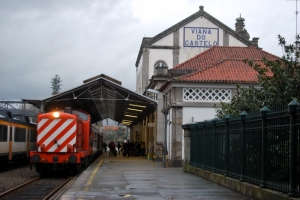 A celebratory beer in the station bar before a 592 DMU back to Porto, then back up early next morning for another cart out on the 0610 Porto – Valenca to intercept 1408 on the 0736 Valenca – Porto at Ancora.

Monday
On arrival 1408 scuttled of ECS back to Contumil so we checked out and took 5607 again down to Espinho on the 1005 Braga – Lisbon. After a snack by the beach we got absolutely soaked through getting back to the station in some of the heaviest rains I’ve seen for a long time, however the reward was new 5604 on the 0930 Lisbon – Braga. 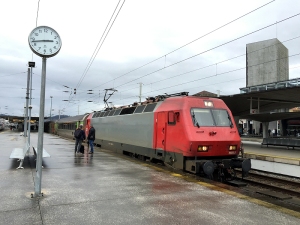 There was more DMUs and a dud 5600 on the next possible moves so we called it a day and headed into Sao Bento for more wandering (albeit every road seemed to take us to the same place) and a dive between some bars before taking the Metro back to the airport and Ryanair home, which was rather unhelpfully kept on the tarmac for over an hour due to congestion at Stansted. Got us back though, and we’d bagged a 1400 so happy days!

I don't know how long these vice turns are likely to continue, but they've been on for at least eighteen months and I'm not aware of any imminent new DMUs. If you can face the festering/flagging of DMU after DMU, or entertain yourself on electrics, beers and a great city (or metro/units I guess) then I'd say go for it.
Last edited: 11 Apr 2016
R

Sounds absolutely brilliant! I really enjoyed the read and there was a great amount of loco haulage in there!

While I'm by far no expert on European rails, as soon as I saw that photo of the 1400 I knew you'd got something special!

But these 56xx locos you got, were they any good?

Harsh on the fester on the plane, but you obviously had a good time. I forget what the 1400s sound like right now (don't worry, I'm about to refresh my memory!) but very nicely done!
8

Techniquest said:
While I'm by far no expert on European rails, as soon as I saw that photo of the 1400 I knew you'd got something special!

But these 56xx locos you got, were they any good?
Click to expand...

They are early series Siemens eurorunner in a DB120 style body so proceed taurus and the like. Sounded similar to DB101s but as its all aircons not a lot to know about! Sadly long missed all the older electrics, would have liked a big orange broken nose

Excellent stuff.
I've only been to Portugal once, back in 2007 and my one solo day out on the trains produced 5604, which I see you had, from Faro to Lisbon for 2621 back.
Thanks for rekindling some old memories.