Railways that are now roads

Edit, there's also a link road near Drax Power Station that is either on or next to the bed of the old Goole to Selby line.
R

Do the Tram tunnels under Holborn count ?
R

Further to the post about Dewsbury, a couple of other sections of former GNR have become roads in the area.
Part of the B6128 Grange Road/Challenge way at Batley follows the path of the line to Chickenley and Ossett.
A large section of the A650 Drighlington Bypass follows the route of the line from Ardsley to Bradford.

FGW_DID said:
Roger Dudman Way that runs right behind Oxford Station used to be former sidings and runs to the flats that are built on part of the former Oxford MPD & sidings.
Venneit Close which runs off Roger Dudman Way is the former turntable area

That will be interesting when Oxford station is finally rebuilt.
M

In Montrose, part of the former Inverbervie branch line is now the A92
S

This is Holman Way in Topsham. It used to be the short branch line from the station down to the quay before closing and being converted to a road.

Parts of the B3227 (formerly A361) between Taunton and Wiveliscombe occupy the track bed of the Taunton to Barnstaple route.

The end of the Meltham branch near Huddersfield is now a residential street, and the access road to Morrison's.
L

A590 South of Greenodd for about 400 yds. Part of Lakeside branch.
Also the suspiciously straight bit of theA593 SW of Torver. The Coniston branch.
Last edited: 12 May 2019
T

Grendon Underwood to Akeman Street is now an access road to the waste incinerator at Calvert. The A43 is on various bits of the Blisworth to Northampton line, it uses the old bridge under the M1.
J

A bit of the A681 at Rawtenstall is along trackbed beyond the terminus of the East Lancs Railway.
S

Bocholt Way is the name of the road on the old trackbed at Rawtenstall.

Have to think back to my original home of Lowestoft and the surrounding area.

The A47, was the A12, between Great Yarmouth and Gorleston heading towards Lowestoft...known locally as 'The Cresta Run'.

The A143 Bungay bypass on the Suffolk/Norfolk border in the Waveney Valley.

Lowestoft North Station now has a 'Beeching Drive' on it.

One of the good things that has happened in Lowestoft is that many of the former railways there have been converted into good quality cycle tracks. The old track bed to Great Yarmouth and the old south harbour lines have been converted and make cycling around town really pleasant.

Trying to think of some around here in the Black Country....to turn the question on it's head, a road has been built with a future piece of rail in mind...well light rail anyway. Dudley Bypass has a reserved space for a tramway running next to it, deliberately put in when it was constructed. Looks like they might be using it soon too.

The A371 follows the route of the old Cheddar Valley Line past Axbridge. These dashcam pictures show the old station buidings.

I’ve driven that a few times. It’s very obvious that it used to be a railway.
E

Daleside Road East in Nottingham used to be the GNR line to Grantham. What I believe was the horse dock for the Racecourse station is hidden in the undergrowth.

edwin_m said:
Daleside Road East in Nottingham used to be the GNR line to Grantham. What I believe was the horse dock for the Racecourse station is hidden in the undergrowth.
Click to expand...

Is that the one that runs parallel to the remaining double track line? I think I’ve seen that platform.
E

Cowley said:
Is that the one that runs parallel to the remaining double track line? I think I’ve seen that platform.
Click to expand...

Yes. The former railway part of the road is just to the south where the Lincoln line runs at the foot of a cliff. Further west the road, surviving Midland and disused GNR railways diverge a bit and the GNR used to run into the two London Road stations.

Here's some dashcam footage following the route of the Somerset and Dorset around Glastonbury. The third exit of the final roundabout leads to the site of the station.

This clip follows the old GWR route at Wells. The GWR station was just after the second set of traffic lights (the goods shed is visible on the left, between the MOT Centre and Halfords). The Somerset and Dorset station was near the pelican crossing just before the roundabout.

Bridport? Looking at Google maps and part of the A3066 / A35 seems to follow the Bridport - West Bay route
3

randyrippley said:
Bridport? Looking at Google maps and part of the A3066 / A35 seems to follow the Bridport - West Bay route
Click to expand...

That seems right. The section running roughly N-S from the Co-op store which looks to be on the old station site to the roundabout before West Bay.
R

30907 said:
That seems right. The section running roughly N-S from the Co-op store which looks to be on the old station site to the roundabout before West Bay.
Click to expand...

exactly what I thought
W

Cowley said:
Is that the one that runs parallel to the remaining double track line? I think I’ve seen that platform.
Click to expand...

I've driven on that road quite a few times in the past 10 years and I never realised it used to be a railway!

About a mile of the unclassified road to Corris to Aberangell just to the west of the latter village is built on the trackbed of the Hendre Ddu tramway that went from Aberangell station on the Cemmaes Road to Dinas Mawddwy branch, up into the mountains to serve several quarries.

If we look at this map, the section of the tramway that is now a road goes westwards from the bridge over the Afon Mynach at Aber Mynach to near the ford on the Afon Angell, the road past Cefn-Gwyn is now (as I imagine it was then) an unmetalled track. I drove along this road from Corris some years back and thought that this part was rather well-graded for a Welsh lane and some of it looked like an embankment, and discovered the above when I checked some old maps.

muddythefish said:
A605 Oundle bypass from Barnwell station (still in existence next to the road - see before and after below) to Oundle has been built on the former Peterborough-Northampton Nene Valley route. 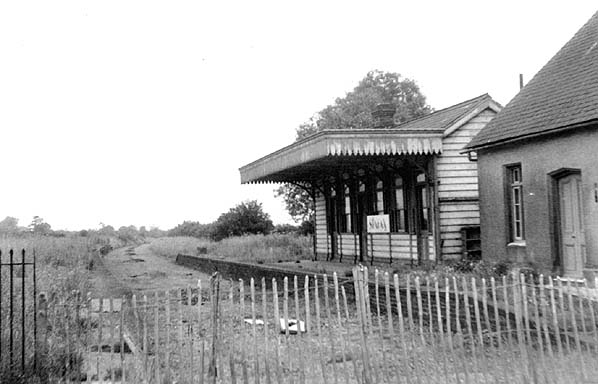 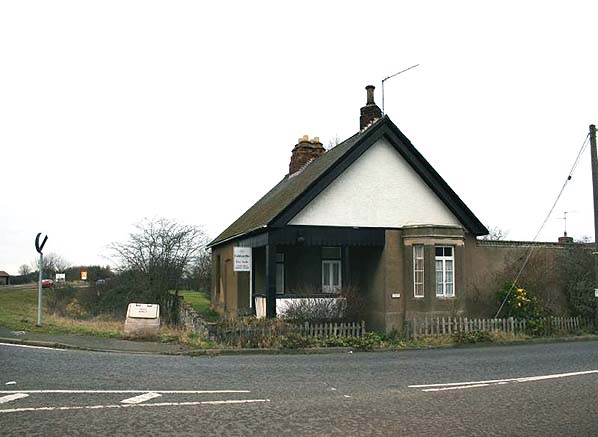 At least the wooden building was saved for future use.

The waiting room on platform two is referred to as "The Barnwell Building" due to it having been moved from Barnwell station to the NVR on April 5th 1977.
Click to expand...