See http://news.bbc.co.uk/1/hi/scotland/highlands_and_islands/5177392.stm for interviews and pictures. 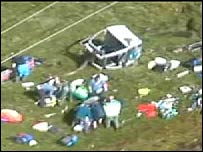 Five people were inside a gondola car which fell to the ground. Five people, including a three-year-old girl, were injured after a cable car derailed and crashed to the ground. The accident at the Nevis Range, near Fort William in north west Scotland, involved a collision between two cars.

One is reported to have slid back down a cable near the top of the gondola system on Aonach Mor, hitting another below it, on Thursday afternoon.

The girl, her parents, a 52-year-old man and his son, 24, were airlifted to Belford Hospital in Fort William.

A major rescue operation was launched and the five casualties, who were all in the fallen cable car, were flown off the mountain to Belford Hospital in Fort William.

It is thought a number of those injured were thrown from the car.

At one point, 75 people were trapped due to the failure of the gondola system.

All were later freed and the gondola system reopened following what has been described as an "isolated incident" within one of the cars.

Police said the 52-year-old man and his son are from Totnes, Devon.

One of the casualties suffered a chest injury, another face and spinal injuries, one was walking wounded and the fourth is still being assessed.

The girl is believed to have suffered injuries to her legs in the accident.

Teresa James, from Belford Hospital, told BBC Scotland some of the injured would be transferred to larger hospitals if their condition worsens.

It is believed one man may be taken to the Southern General Hospital in Glasgow for treatment.

Ms James said: "Belford Hospital is well used to dealing with serious cases like this and they've had a lot of experience over the years with mountain injuries."

About 50 people were left stranded at the gondola's top station and 25 others in cars suspended on the cable following the incident.

An RAF helicopter ferried about 40 from the station, while 10 others walked down the mountain themselves.

Emergency services said as well as the five confirmed injured, there were reports of other people walking down from the scene with injuries.

Trevor Johnson, Highlands and Islands Fire and Rescue Service divisional officer, said firefighters trained for an accident on the gondola line only a month ago.

He said: "On this occasion it really proved worthwhile."

Describing the scene faced by the first fire crews to arrive from Fort William and Spean Bridge, Mr Johnson said: "It was very controlled.

"Obviously it is a recognised risk within the area."

In a statement, the Nevis Range said the incident happened 500m from the top station at 1530 BST.

Marian Austin, managing director of the Nevis Range resort, said four of the injured needed a stretcher and one was "walking wounded".

She said: "The main cable has not been affected. Damage has been confined to the gondola involved.

"Our thoughts are with the people who have been injured and we wish them a speedy recovery."

Miss Austin said an investigation has been launched into the accident.

The Doppelmayr gondola system is made up of 80 six-seat closed cabins running on a continuous 4.6km steel cable.

They carry mountain bikers, climbers, walkers, paraglider and hanglider enthusiasts from 300ft up to 2,150ft on the north face of Aonach Mor, Britain's eighth highest mountain.

Reporter Ian Ferguson, talking to BBC Scotland from Aonach Mor, said the accident happened near the top of the gondola system where the fall to the ground was "not very great".

One of the cars had slid back down the cable, colliding with the other at Tower 14.

Mr Ferguson continued: "I've been to emergency exercises here before and people are told to stay in the gondolas and not to move.

"Staff slide down the cable, land on top of the gondolas, prise the door open and put in an emergency rope ladder to get people out.

"The mountain rescue team take part in that as well. But that process only starts once casualties have been dealt with."

A local mountain expert said a new cable had been fitted to the system this year.

The gondolas are suspended from the cable and are held on by large clamps. As the gondola enters the base or top station, the clamps open, releasing the car.

The journey up and down takes between 12 and 15 minutes each way.

The system is the only one of its kind in Britain and was originally built 12 years ago to transport skiers up Aonach Mor.
Click to expand...

It's very bad news in terms of upsetting those who are scared of suspended transport. I hope those affected recover.

I wonder why they are allowed to reopen so quickly though.
G

Ive been on these so often, im just glad nothing like that has happened before and I doubt id be going on them soon, I hope everybody stays o.k. I just saw it on the BBC news.

One would imagine they are allowed to open again quickly because of the fact that people were still in other gondolas on the system. Plus if the main cable isn't damaged (and it's pretty hard to get a main cable to snap) then the system is perfectly safe to restart.

Doppelmayr and Poma SA have been in the business of making cable transportation systems for many years...going over far greater heights and weights than the Nevis range gondola. Have any of those ever had an accident? Well, yes one or two, but emergency services are well trained...in mountain resorts a simulated emergency is carried out once a week when the cable system is running. There are also failsafes on the motors and cars themselves that lock them to the cable...yet every now and then one car will come loose...either due to a fault or due to bad maintenance. I'm not saying Nevis Range don't maintain their cars, I'm saying this happens in other places and we never hear about it...because even though it's a tragedy if anyone dies, they never usually do.

The point I think i'm trying to make here is that cable systems are like aeroplanes...statistically the safest form of transport, but if one does go wrong, you are likely to not be in a good state of affairs at the end of it (although it depends on what goes wrong). Gondola technology has moved on since the original "hook it to a wire and go" systems, so there is no need to feel worried when travelling on them.

Mind, if you want something to scare you on a cable car...head for Matlock Bath and the Heights of Abraham (Poma SA, 2005 renovation of an original system)...three cars run with each other, and slow down when over the highest drop in order for you to look at the view (the slowing also occurs as another set is in the top and bottom station for easy boarding/alighting).

I'm not a cablecar expert, but when I was in Italy skiing the Doppelmayr lifts they had there would slow your car down in the boarding / alighting areas but the others would continue at the same speed - were they detatched from the cable or something? Clamped on then released at the "station"?

Basically yes, there are about three safety grip systems that are released as the car enters the station, taking it off the main cable (the main cable then goes round the end drive wheel outside of the station cabin...see Alton Towers' old system for an example, or continues into the drive station). Cars then head round the station on either a slower moving cable, or a metal grip conveyor, that generally doesn;t do more than 6m/s. Once you're off/on the doors are first locked (if a gondola) or you pull the bar down (on chairs), the car heads to the edge of the station conveyor and is reattached to the main cable, which shows as you accelerate away.

Cable cars have moved on since the original "pulsed-ropeway" or even "ropeway" systems that just went round and round (pulsed ropeway is the example quoted at Matlock Bath (Poma.)) Detachable grips are getting to be common place (no one likes jumping out at line speeds!) mainly for the disabled access.

I remember the odd system on Sicily linking Taormina with Mazzaro, which has two convoys of 4 cars. It comes to a complete stop in the stations and the convoys operate every 15 minutes. The cars themselves are like those found at a ski resort.
G

I was up in Scotland last week, and decided to go in one, at the first part, I was terrified, but as time went on I grew comfortable, we did not fall off and it was a very enjoyable trip