On 9th June, my grandfather and I pondered what to do the following Saturday and after discussion of potentially using EMT’s £10 off offer to Derby, I realised that that was only valid for journeys starting in London which wouldn’t make it any cheaper than a normal Ashford to Derby advance fare, so we returned to the drawing board. I remembered Southern’s great DaySave offer and suggested that instead and we decided on that (fortunately it was precisely a week before the day too, the minimum required booking time).

A week later and we got to Ashford at about 08:10, in enough time for a coffee from Pumpkin Café. On time 171722 rolled in to platform 1 and we grabbed our seats. Not long thereafter, we saw a Eurostar arrive working the 08:28 to Bruxelles Midi. At 08:32 we began our journey down the Marshlink, which was uneventful but busy as usual west of Hastings (nobody joined or alighted at Three Oaks though – that place really is in the middle of nowhere!).

We made a timely arrival at Brighton at 10:20 and walked across to platform 1 for the next leg to Ford on 377419 bound for Southampton Central via Eastleigh. My grandfather noted how the journey along the West Coastway on this service was quite a lot like a trip on London Underground with calls at stations every couple of minutes. A few interesting sites to be seen on this trip: The Dubarry Perfumery Company building at Hove and Shoreham Airport.

It was only a short wait at Ford before 377435 appeared for the 11:16 to Bognor Regis, a journey I was expecting to be formed of a 313. This train was almost empty and we were two of only three people in our carriage although we picked up quite a few more passengers at Barnham.

We went through the barriers at Bognor to discover that the toilets had been locked up because of persistent vandalism. Instead of spending any time here, I suggested that should we go back to Barnham. So it was back on 377435 for the 11:39 to Littlehampton for the short hop to Barnham. We both had no clue that Barnham was such a busy station and as such were glad to have made the call to spend a little time there over Bognor.

Following half an hour at Barnham including several photographs and videos, 377435 reappeared and we made another short journey on it to Littlehampton. Each set of buffers at Littlehampton has a pot of flowers set on them, quite a nice touch. A few minutes after we jumped off, 377435 departed and we quipped that it might, with any luck, be the last we saw of it that day. A Victoria train arrived and departed before our train to Portsmouth appeared; it was a 377 and I’ll let you guess which one it was… yes 377435 again! Although I’m not complaining it wasn’t a 313 really; the lack of toilet on those would have made this trip slightly less comfortable.

We departed on time at 12:54 in precisely the same seats for the last new section of line of the West Coastway for the day. We had our lunch and settled down for the 56 minute ride to Portsmouth & Southsea. Passing through Nutbourne, I remembered seeing a photo of this station flooded just a few days prior. Arriving at Fratton, we saw two South West Trains Sprinters, a 158 and a 159 in the sidings.

Upon arrival at Portsmouth & Southsea platform 3, we saw that we had come in to the same platform that a South West Trains 450 was already occupying, although it would not depart for Southampton for some time. Up the stairs to the high level station and we walked down to the Harbour end of the island platform to see the Spinnaker Tower. I almost got blown off my feet by the wind at one point, although it certainly wasn’t the “worst storm of 50 years” that has been forecast the day before. A few South West Trains services came and went and then our next train appeared on the boards. Curiously it was advertised as Horsham, not London Victoria, but I refused to believe this and I was proved correct when 377122 arrived with the correct destination on the front.

Taking the route back through Barnham, except this time on a semi-fast service, we headed up the Arun Valley line and attached to a portion from Bognor at Horsham. I particularly enjoyed this journey as it was both picturesque and it didn’t take too long. Following coupling, we went up through Three Bridges to Gatwick Airport, our next port of call. I tried to dash down the platform to see the front unit, but alas it departed too quickly.

I heard an announcement of either a delay or cancellation on one platform so I imagine something was wrong on Thameslink, but a check of the boards revealed that our next train over on platform 5 was running on time. A 442 arrived terminating a Gatwick Express service and then it wasn’t a long wait before 377119 coupled to 377422 arrived forming the 15:50 to Littlehampton and Eastbourne. We didn’t want to return to Littlehampton, so it was the rear portion of the train that we boarded. Looking back, it turns out that we had travelled on 422 before between Brighton and Hastings back in November.

The same set of Electrostars that were in the sidings at Eastbourne in the morning were there again in the afternoon. To my surprise 377201 was in front of us at platform 2, so we were given the longest possible walk at Eastbourne, to platform 3, where we had just under half an hour before our booked departure for Ashford.

171721 arrived from Brighton, we boarded and found a seat at a table. Most of the seats were taken now already, proving how well used this service is. A lot of people stayed on beyond Hastings too (in fact a number joined there). At Rye, my grandfather pointed out that there was no 171 to be seen in the other platform, which is odd as this is the usually where they pass because of the single track nature of some of this line. In fact we didn’t pass a fellow 171 until not far from Ashford (a little research reveals that there was a tree on the line at Ham Street at some point that day).

All in all it was a good day in the land of third rail, covering just shy of 270 miles with all but the Marshlink and East Coastway being new to me. The weather was considerably better than expected despite the high winds at times. My grandfather was very surprised when I mentioned that DaySave isn’t a special time limited offer; it truly represents spectacular value for money.

Photos from the day can be found here, the best in my opinion probably being this one: 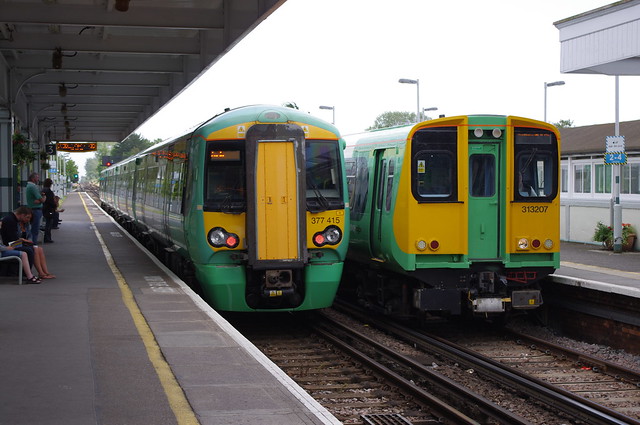 Sounds like you had a great day, TheJRB - a very nice report.

Got to agree about Barnham, it's a very interesting place to change trains with all the activity that goes on. You were fortunate to get the 377 on the run up to Portsmouth, when I did it I had a 313 there and back - very jerky and uncomfortable!

trentside said:
Sounds like you had a great day, TheJRB - a very nice report.

Got to agree about Barnham, it's a very interesting place to change trains with all the activity that goes on. You were fortunate to get the 377 on the run up to Portsmouth, when I did it I had a 313 there and back - very jerky and uncomfortable!
Click to expand...

Lucky with the 377 then! Although I admit I'm impressed that the 313s have stood the test of time as well as they have, even if they aren't that great to travel on. Who would have thought they would end up on the south coast?

Sounds like a fun day was had there, and I agree the DaySave is an excellent value ticket. I might do one again sometime to go shack scratching and actually get on a 313/2 finally, always think about doing it when it's too late though!

Can't imagine doing one all the way from Portsmouth Harbour to Brighton though, that would be a mission if you'd had much at all to drink within a couple of hours of the trip. Seems odd to see a 313 down there though, who knows where they'll finish their careers?
4

Your other unit between Horsham and Gatwick Airport was 377469.

Techniquest said:
Sounds like a fun day was had there, and I agree the DaySave is an excellent value ticket. I might do one again sometime to go shack scratching and actually get on a 313/2 finally, always think about doing it when it's too late though!

Can't imagine doing one all the way from Portsmouth Harbour to Brighton though, that would be a mission if you'd had much at all to drink within a couple of hours of the trip. Seems odd to see a 313 down there though, who knows where they'll finish their careers?
Click to expand...

That's made me think about the prospect of 313s working on an eventually electrified Marshlink... I'd rather keep the 171s (that said 313s would probably be good for the Ashford-Rye shuttle)!

Thank you for the information.