18:00 KX to Glasgow is Double Headed, 2nd loco had failed so rescue loco came to save the day, 18:00 left 7mins late with a nice spark from the leading locomotive

juliang and RJ at the scene
R

This happens all the time not exactly rare for GNER....
W

Its lucky they had a spare loco nearby.
T

Only about 2 miles from Bounds Green..!
J

Tom said:
Only about 2 miles from Bounds Green..!
Click to expand... 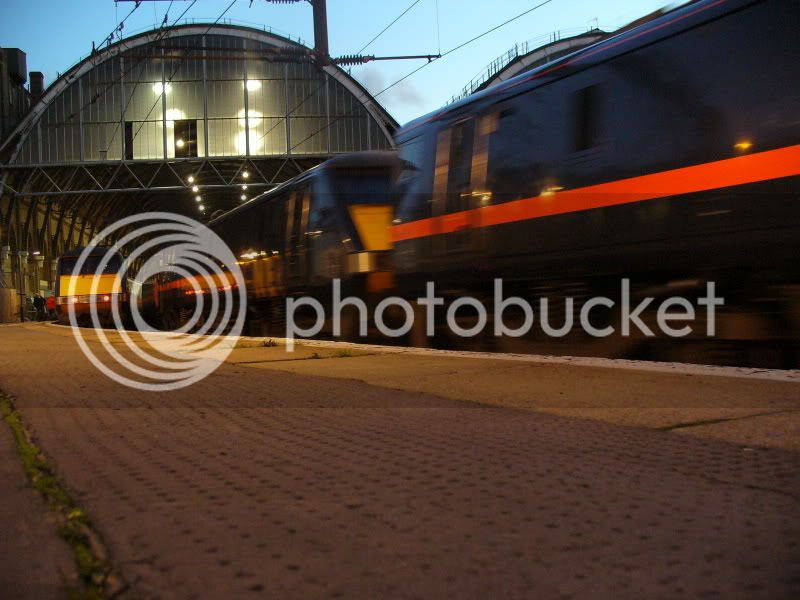 Saw it unexpectedly at donny tonight more than 7 mins late though, double 91 thrash!

I doubt it would have been double 91 thrash. As it was stated, train loco had failed so the second came to rescue. Therefore only the leading loco was powering

And as JonB says, it's not exactly rare these days.

By the way Julian, get yourself a tripod

Jamster said:
I doubt it would have been double 91 thrash.
Click to expand...

I don't think they would be allowed to double head with 91s (or any other electric loco) anyway, since it would fry the overhead. Freightliner can only get away with it for 86s since they have to keep the amps down (the 2 locos are more for adheasion and tractive effort than raw power, hence why diesels can do the same trains single), and I don't think they can for the more powerful 87s and 90s. Also, at high speeds the second loco would have serious problems keeping it's pantograph in contact with the overhead, and I think any train double headed by electric locos is restricted to 75mph. Then again, with a second loco dead in train they are probably restricted somewhat anyway, possibly to 100mph, maybe less when running in lower speed limits.

I must admit that double headers are something that I'm not used to...Although I did once see "Battle of Britain" (A Class 50, couldn't find the number on Google though!

) hauling a broken down 411 on the Guildford > Aldershot > Ascot route!

ChrisCooper said:
Also, at high speeds the second loco would have serious problems keeping it's pantograph in contact with the overhead...
Click to expand...

<Off_topic> Is that why the APT had that rather unusual traction unit arrangement (Two power cars in the centre of the train insted of at the ends!) just so that two cars could use the same pantograph? :\

Obviously someone never told B.R. about HT cables...Which incidently is the solution used in the Pendolino to get around this exact same problem! So we now have a newsflash: Alstom actually got something right for once!

Death said:
"Battle of Britain" (A Class 50, couldn't find the number on Google though!