Yesterday me and Dad (The Gricer) had planned to go 'photting' in London and in a moment of complete boredom TheSlash asked if he could come!

First off me and Dad left home to get some new brake pads for the car before driving to the station and catching the 09:31 to London which TheSlash had boarded from near Portsmouth. We arrived into London two minutes down and went down to the Bakerloo after waiting for TheSlash to get a travelcard. We got to Paddington just a couple of minutes too late for the Hanwell train so we went to Southall instead. All we really saw of any interest at Paddington was the all over purple Class 43.

After passing Acton, North Pole and Old Oak we shortly arrived at Southall. Here we saw a late-running EWS 59, a few 360/2s, 332s, HSTs, Adelantes and of course some Turbos. The Mendip 59 never turned up, however TheSlash pointed out that it may have been held further up the line to give time for the EWS 59's train to be shunted at it's destination as they were both bound for the same place.

We boarded a Heathrow Connect service back into Paddington, passing a late-running Freightliner 66. Upon arrival at Paddington we got the Circle to Victoria where we had ten minutes for the next London Bridge service, where we alighted at Wandworth Road. At this location we bumped into 'Memorex' and 'Class 313' who (for some strange reason

) and the Gypsum train in the hands of the GBRf 'Medite' 66709, as well as the usual Networkers, Electrostars and Class 456s. The scheduled Class 92 never showed.

We got the next Victoria bound service and alighted at Battersea Park, before finding out the Class 37s were 130 minutes down! From there we got the Circle to Blackfriars where we saw a variety of liveries:


We then got a service to King's Cross but nothing of much interest was in. We then got the third C-Stock of the day to Liverpool Street where we got a 315 refurb to Stratford. No freight was seen however the usual DVTs, 321s, 315s, 360s and 90s were seen, one being the large EWS stickered grey Class 90. From here we got a DLR refurb to Crossharbour (just for the hell of it) then a non-refurb to Bank. From here we decided to walk to Waterloo along the river. Dad and TheSlash had a pint in a pub from where we could see Blackfriars station from across the river and Dad nearly tripped over a paving slab. From Waterloo we all made our way home from adjacent platforms after what I thought was a good, bright day.

The on equestion please Damon. Which class 90 (EWS stickered grey) was it that you saw at Stratford? Just so I know whether it's a winner to try and get in the book when City are at Ipswich.
C

clagmonster said:
The on equestion please Damon. Which class 90 (EWS stickered grey) was it that you saw at Stratford? Just so I know whether it's a winner to try and get in the book when City are at Ipswich.
Click to expand...

Frank are you blaming the Paving slab for nearly Tripping or The Alcohol?

158 said:
Frank are you blaming the Paving slab for nearly Tripping or The Alcohol?

Well no doubt Damon was inferring that there was a connection between drinking and tripping over but I prefer to blame the shoddy state of the paving!

If he makes any more comments of that nature I might have to show you all a picture taken yesterday of him looking a bit dazzled by the new First CC livery on a 319. After all I never did get my own back for that rather unflattering pic of me he posted here the other day.

Nah - we're even. He was the first to post silly pics of me anyway.

OK, he's gone to bed so - have a look at this expression : 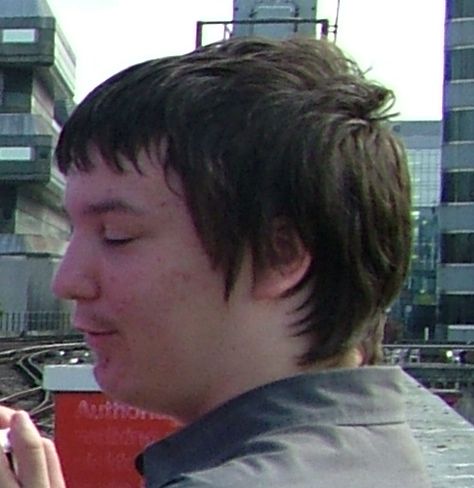 To see what he's looking at click this:
http://www.the-siding.co.uk/avs/dam1.jpg

You are sooooooo funnny... Anyone notice how there is no real way to distinguish between first and second class except a small number 1?

Is it me, or does Damon look quite (very) drunk in that picture?

Frank, are you teaching him some bad habits????
J

60006 Scunthorpe Ironmaster said:
Frank, are you teaching him some bad habits????
Click to expand...

Must be, either that or he has met you once to many times