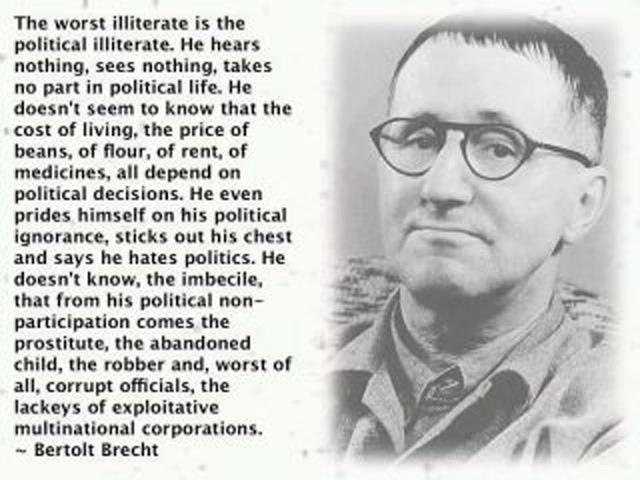 To accomplish great things, we must not only act, but also dream; not only plan, but also believe.

Agree with this entirely (except I think he should have left out the word "multinational" - those corporations are convenient hate figures, but you get just as much corruption in purely domestic organisations). It is a pathetically lazy approach to say "THEY are all as bad as each other, so there is nothing I can do". Everyone can do something, even if it is keeping discussion alive in a pub. We live in "interesting times" and we should all be overseeing our worlds to stop those with a limited view preventing new approaches (amongst which I personally include coalition government)

I get the feeling that someone's going to trot out that "They came for the Jews, and i did nothing..." etc thing that someone always comes out with next, as a means of Emotional blackmail with which to beat those of us who can see no conceivable difference whether one's town hall is staffed by this crowd who wear Blue rosettes or this crowd with the Red rosettes (or even that crowd, indistinguishable from either of the other crowds, who have Orange rosettes). There may be some parts of the world in which this can genuinely make a difference, but I'm sorry to say I really don't think the UK is one of those any more. The whole system has outlived its usefulness, and needs starting again from a clean sheet of Paper, I'm afraid.
W

Oswyntail said:
THEY are all as bad as each other
Click to expand...

But that is pretty much true.
Look at the situation we have.

Labour who did quite a lot of damage to this country during their time in office and who currently have no idea what they would actually do if they were put in power this second.
A tory government who seem hellbent on hurting the most vulnerable in society.
And the lib dems who are happy to bend over whenever the tories want them to just to stay in power.

Then we have the BNP who are just a bunch of racist thugs, UKIP who can't seem to see that removing us from Europe would be economic suicide (say bye bye to millions of pounds worth of trade if we did that), the Greens who have totally unrealistic policies (even though I personally support many of their ideals), etc etc.

Our political system is messed up beyond belief.

I don't hate politics. But I do hate politicians. Or at least the current (and future) crop of them.