Reported that there is an ongoing fire in the station building at Troon Railway Station. Three appliances from the Scottish Fire and Rescue Service remain in attendance at the travel hub which had been busy with beachgoers on Saturday.

Emergency services have been called to Troon railway station after a fire broke out at lunchtime.

Pictures from the scene show smoke billowing from the travel hub after the blaze started shortly before 1pm on Saturday.
Travellers have been warned to expect disruption as three fire appliances remain at the scene.

There are not believed to have been any injuries.

ScotRail tweeted: “Emergency services are dealing with an incident in the Troon area. “Consequently, trains through the station will be cancelled, delayed or revised.
Click to expand...

From the pictures, it looks to be quite serious.

Fire billowing from the station building at Troon station.

On that side of the platform, there is a shop and I think a hair salon, perhaps it could be related to that? Devastating nonetheless.

All trains to Ayrshire are cancelled as a result, including Largs and Ardrossan Harbour (presumably due to trains being left stuck)
R

Unfortunately it appears the entire roof of the specific building has burnt down, saw it on a Facebook live

Sprinter156 said:
Unfortunately it appears the entire roof of the specific building has burnt down, saw it on a Facebook live
Click to expand...

Gosh, it did look pretty serious.

Hopefully the building can be salvaged in some way.
F

Scotrail314209 said:
All trains to Ayrshire are cancelled as a result, including Largs and Ardrossan Harbour (presumably due to trains being left stuck)
Click to expand...

Possibly the OLE isolation took in Kilwinning also, although once staff are on site switching should enable that to be resolved. A very sad event, if only the Troon avoiding line was still available !
G

According to the BBC website the fire was in the ticket office and spread to the roof space, but is now under control. The cafe and hairdressers are reported to have been damaged.

Gloster said:
According to the BBC website the fire was in the ticket office and spread to the roof space, but is now under control. The cafe and hairdressers are reported to have been damaged.
Click to expand...

From what I've seen, the building has been utterly gutted on the Glasgow bound platform. It looks awful.

Troon Station from the air, showing the damage

Tickets are valid on Stagecoach buses, but reports of them being very busy.

It's a sad day for Troon, as the station has been standing for years.

Ultimately, this could not have happened on a worse day. Summer Saturday with scorching temperatures, meaning people flock to Ayrshire in their droves. Ayrshire Daily News are also saying trains may be suspended until at least Monday.
I

There wouldn't have been any trains tomorrow anyway because of the RMT strike.

It is so sad to see the damage to this historic station. From the photos it appears likely to be a total loss of the buildings on the Glasgow bound platform.
The station is "B" listed by Historic Environment Scotland, see Troon Railway Station listing.

I went down to the coast on the 10:48 from Glasgow Central to Largs which was full and standing. I was at Ardrossan South Beach station waiting for my train back to Glasgow when the next services were cancelled. I left the confused customers on the platform and I caught the Stagecoach bus back to Glasgow. The driver wasn't (yet) informed of rail ticket acceptance. At Kilwinning there was a large group of bikini clad teenagers wanting to continue their journey to Troon. They were not happy to be told that a bus from Ardrossan to Glasgow wasn't going to carry them to Troon!
D

InOban said:
There wouldn't have been any trains tomorrow anyway because of the RMT strike.
Click to expand...

Not so. Ayr and some of the Ayrshire and Inverclyde services are among the few that have been running throughout the strike. See Scotrail website for more details.

Services now running to Ardrossan and Largs as per normal, Ayr services terminating at Kilwinning.

Surprised they aren't running them to Irvine as they've got the turnback facility.
M

Surprised they aren't running them to Irvine as they've got the turnback facility.
Click to expand...

May be something to do with how the OHL is "sectioned".

Sprinter156 said:
Unfortunately it appears the entire roof of the specific building has burnt down, saw it on a Facebook live
Click to expand...

It would appear to be more than the roof, looking at the video on the BBC website (screen grab below): Trains cancelled as firefighters tackle Troon station blaze - BBC News

Information suggests the fire started on the outside of the building, on the outside of one of the booking office windows. Members of the public brought it to the attention of the staff at the kiosk/takeaway, who called the fire brigade. The station was unmanned at the time by Scotrail staff. Time will tell.
G

Do they leave money in the till when staff are not on duty?

Gloster said:
Do they leave money in the till when staff are not on duty?
Click to expand...

Was always out in the safe when I worked in a booking office. Thankfully cash transactions are few & far between nowadays.

I had a memorable time at Troon Station the only time I have been there. Lovely building and station from what I remember, Also the female staff member was very friendly and left a positive impression. Very sad news.

ScotRail have just posted the following photo on Facebook:

Gosh, what a shame.

Very sad, looks like demolition and clearance of what remains is required before the line can re-open; NRE is showing 'disruption expected until the end of the day tomorrow, Monday 19th July'.

Doesn't look like much is salvageable from that. If it was a conservation site maybe, but not with a railway to run.
P

Wow, that looks pretty severe. What a shame!

Devastating. I wonder if the chimney stack can be retained?
4

The Railway Heritage Trust has offered £500,000 towards repair.

A restoration group has offered £500,000 to help repair the fire-damaged Troon railway station.
The Railway Heritage Trust said it wanted to help salvage the Victorian structure following Saturday's devastating fire.
It opened in 1892, designed by architect James Miller, whose work includes other west coast stations as well as Glasgow Royal Infirmary.
ScotRail said the cause of the fire was not yet known.

On Saturday fire crews were met with a well-developed fire on Barassie Street in the South Ayrshire town in the station ticket office, which had spread to the roof space.
ScotRail said much of the building on platform one was destroyed and an overhead power cable was damaged.
A nearby hairdressers and café were also gutted by the fire, and part of the building collapsed. There were no reported injuries.

The Railway Heritage Trust said its offer to Network Rail of a £500,000 grant towards restoration would only cover a fraction of the cost.
Its director, Andy Savage, described the fire as "a real devastation".
"Half a million pounds is going to contribute - it's not going to pay the whole bill or anything like it," he said.
Mr Savage told the BBC: "Whether it's totally destroyed is another matter, because clearly the timber building is totally destroyed.
"The key thing with this is whether the iron and steel structure that supports and forms the roof between the two platforms has survived and is salvageable because if that is salvageable then there are options.

Mr Savage drew comparisons with a fire which destroyed the Old Royal Station at Ballater in 2015.
"The only thing that gives me hope is that six years ago I was looking at very similar images of Ballater, which was also destroyed by fire.
"Then at the end of last month I was at Ballater unveiling a plaque... to celebrate the total restoration of the station.
"Whether that can be done at Troon is another matter - but it can be done."
He said it cost £4.5m and six years to restore Ballater train station in Aberdeenshire after the fire.
Mr Savage continued: "I'm sure Troon will be more expensive than that, simply because it's next to an operational railway.... so the complexities are far more.
"But it depends on the damage and what has to be done. It could be relatively easy; it could be much more complex.
"We don't know what the damage is at this stage."

The blaze brought major disruption to the seaside town on Saturday, which was busier than usual due to the sunny weather as people flocked to the beach.
Several hundred passengers' journeys were affected on Saturday, and were put on buses to Kilwinning station from where they travelled to Glasgow.
ScotRail urged passengers not to travel to Ayr by train on Sunday.
It said there would be no services from Glasgow Central to Ayr past Kilwinning until at least Monday.
The train operator said a contingency timetable would be put in place, which would see services terminate at, and start back from, Kilwinning, with two services an hour between Glasgow and the Ayrshire town.
Click to expand...

I'm guessing the closure is going to have to take in damage to the platform, as well as the stations' electrics.

I wonder if the Ayr bound building can be saved, as that looks relatively undamaged.
O

The only positive thing from this incident is that no one was seriously injured.

It's always sad when a piece of railway heritage, especially from the 19th century is lost. I really hope that the station building can be rebuilt in some way.
J

A photo from 2008 (click on it to go to the larger original on the Geograph website):
Troon railway station, Ayrshire 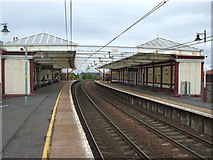 © Copyright Nigel Thompson and licensed for reuse under this Creative Commons Licence.

Clearly shows how the platform canopies are supported by girders running from side to side of the station, and how they also serve to support the OLE.

The building that was badly damaged seen in 2019:
Troon Railway Station, South Ayrshire

© Copyright Mark S and licensed for reuse under this Creative Commons Licence.

I suspect that there was a continuous roof void the length of the building - unfortunately there are no photos on the Geograph website of the building interior - and this always causes problems if a fire occurs. Firstly the void allows rapid spread, secondly the roof is covered with tiles expressly designed to keep water out so the Fire Service has great difficulty getting water onto the fire!
S

John Webb said:
A photo from 2008 (click on it to go to the larger original on the Geograph website):
Troon railway station, Ayrshire

© Copyright Nigel Thompson and licensed for reuse under this Creative Commons Licence.

Clearly shows how the platform canopies are supported by girders running from side to side of the station, and how they also serve to support the OLE.
Click to expand...

Are there any other stations that have girders spanning the tracks like that but not an overall roof?

snowball said:
Are there any other stations that have girders spanning the tracks like that but not an overall roof?
Click to expand...

Paisley Gilmour Street came to mind, but then I remembered that it has an overrall roof now.
P

snowball said:
Are there any other stations that have girders spanning the tracks like that but not an overall roof?
Click to expand...

The south end of Dalmarnock also has that (or something similar)