The A4s based in USA and Canada 60008 Dwight D. Eisenhower and 60010 Dominion Of Canada will be expected in the UK during September of this year.

The Railway Magazine - August 2012 Issue said:
In Montreal 60010 will need to be moved only a short distance for loading while 60008 will have to be propelled about half a mile to a loading point once released from its current building.

A special flat wagon will then carry each one in turn to Halifax both locomotives are within the north American loading gauge.

Both A4s will be shipped in late August but 60008 will be moved to Halifax first in July before the rail flat car proceeds to Montreal to extract 60010.

The locos will meet up at the docks and sailing will be in August with the arrival of the 2 A4s at Liverpool Docks in early September and hopefully with a private ceremony, won’t be public due to security arrangements within the port)

Both A4s will travel on a back of a lorry from Liverpool Docks to Andrew Goodman’s yard near Birmingham for examination and preparations before their final onward journey to NRM York and Locomotion, 60010 will travel to Shildon while 60008 will travel to NRM York for Cosmetic restoration, also 60010 apparently will be transformed from Brunswick BR Green to LNER Garter Blue with Canadian Bell on the front and Chime Whistle, both A4s will join 4468 Mallard at the NRM in early 2013 on Display, then current plan but it might change is to have ALL 6 A4s at the NRM for 1 month together, the final event would take place at Locomotion in early 2014 and after the event, 60008 and 60010 will be leaving Shildon for Green Bay (USA) and Montreal.
Click to expand...

This is the current plan after reading about it in The Railway Magazine but it could change in due course
Last edited: 7 Oct 2012
R

Wuld it be churlish to wonder how much this is costing, and what the NRM might have been able to spend it on? Yes, I suppose it would. It's like the Olympics, isn't it.

Well, they'll probably make something out of all the people (myself included) going to see the line-up and making donations. Because, whatever happens, I will be there.

Schnellzug said:
Wuld it be churlish to wonder how much this is costing, and what the NRM might have been able to spend it on? Yes, I suppose it would. It's like the Olympics, isn't it.
Click to expand...

I think they have sponsorship for most if not all of the cost.

Location
All around Sloane Square

Hooray, a train ticket to York is a lot cheaper than plane tickets to the US of A.
S

update, once the A4s go to Liverpool, they heading STRAIGHT to Shildon and be put on display they not going via Birmingham now

60008 and 60010 should be docked sometime today, their ship has popped up on marine traffic, they are on Atlantic Conveyor. The ship is just passing Rosslare, not long now and they'll be home.
B

The ship is arriving at Liverpool now, a tug is just helping it in (no not a class 60 lol), apparently they will be last to be unloaded so probs be in the morning when they come off, 60008 and 60010 are home folks after 45 years!
S

EXILED A4 streamlined Pacifics No. 60008 Dwight D. Eisenhower and No. 60010 Dominion of Canada will be taken one by one to the Locomotion museum at Shildon once they arrive at Liverpool late on Tuesday.

Set to be unloaded at 7am on Wednesday behind closed doors  members of the public will not be admitted to the dockside  the pair must wait for customs clearance before being taken by low loader to Shildon.

Because of sheer pressure of work, haulier Moveright International, which has handled the repatriation of the pair on behalf of the National Railway Museum, will have only one low loader available.

Best estimates are that one of the A4s may leave Liverpool Docks on Thursday afternoon. The low loader will take it to Shildon before returning for the other.
The second A4 may now reach Shildon on Saturday. At Shildon, they are to be immediately placed on public display, with free admission.

They have been borrowed from their museum homes in North America for two years in order to help the NRM celebrate sister locomotive Mallards world steam record run 75th anniversary in 2013.

All six surviving A4s will be lined up at the NRM in York and at Shildon.
Click to expand...

It's great to have them back!

From looking at them on the low loader looks like they'll be transported uncovered by road?

I'd love to see these hurtling along the M62, does anyone know their route to shildon and a time?
P

Location
Near where the 3 ridings meet

Ploughman said:
That isn't the trailer they will be moved on.
Its just the trailer used for on board ship.
Click to expand...

With the arrival of both 60008 and 60010 the unique and probably unrepeatable opportunity of reuniting them with 60009 and staging the ultimate A4 line up of the BR Green liveried examples . I have the agreement of all parties to make this happen , but our window of opportunity is literally two weeks .

There will be two evening shoots with the iconic line up only available to participants , the monies raised going directly too the movement costs of 60009 . If you are interested and would like details please send me a message as soon as you read this and i'll forward on full details

When will this be??

I was at Shildon yesterday and overheard someone saying Friday Union of South Africa arrives. Likewise, £25 would be just about acceptable.

Also overheard someone quoting £60 when all six are lined up. Hopefully thats not the case.
S

The event is now full such has been the demand . Cost per night of my event was £60 because it was preferred to have limited numbers on an evening shoot to allow everyone to get the shot they want . to make this happen has not been cheap and with the limits of numbers applied at the cost charged has just about covered the costs

A friend of mine visited Shildon during the week and sent me a couple of pictures of 60008 and 60010. I have put them on my Flickr site and this is the first one; clicking on it will enlarge it and take you to the other one : 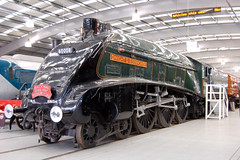 Hope that they are of interest.
D

45669 said:
A friend of mine visited Shildon during the week and sent me a couple of pictures of 60008 and 60010. I have put them on my Flickr site and this is the first one; clicking on it will enlarge it and take you to the other one :

Hope that they are of interest.
Click to expand...

! Looks like Dominion of Canada needs a good clean! But then, we're used to immaculate steam locos, so perhaps she is closer to their 'natural' condition (or so my dad tells me).
Y