"Severe disruption due to adverse weather conditions
Train services on all routes in and out of Leeds have been severely disrupted due to extreme weather conditions.
A lightning strike between Middlesbrough and Northallerton is also causing delays." From tpexpress.co.uk

As well as this, a broken down train between Newark and Retford is causing delays of up to 1 hour on the ECML and vandalism near Manchester Victoria has completely suspended services towards Stalybridge.

Not a good night to be travelling

VT service was running 60 late at Newton, heard on the radio.
M

So all in all a pretty terrible day! It seems all these problems inconveniently always happen at once!

It's interesting to see how certain problems affect people doing 'local' journeys in other parts of the country.

! What was the fatality near London?

Train services are currently being held awaiting further developments. Delays of up to 90 minutes can be expected

There is currently no estimate for a normal train service to resume
Alternative Routing: South West Trains will accept customers with First Great Western / Virgin Trains tickets between Reading and London Waterloo
Easements: London Underground are accepting National Rail tickets on all reasonable routes
Updates: 18:27 Train services are still being held and there is currently no estimate for train services to resume. First Great Western services are being altered to start from and terminate at Reading or other stations as appropriate
Click to expand...

Not a healthy scene: 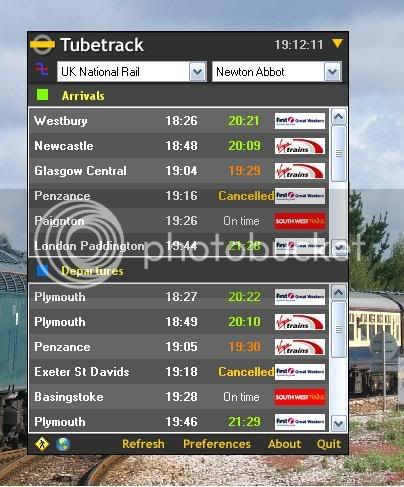 swt being the only SW toc un-affected!
M

Yes that does look pretty bad - Doncaster and Leeds don't look so good either!
T

I'm not surprised about the chaos at Leeds station. Living about 20 miles away we had torrential rain (I don't think I've seen it any heavier), as well as lightening and thunder this afternoon at about 4-4.30. An hour later ad the sun was out!
M

I'm guessing GNER has been given major priority tonight after the train breakdown on the ECML - 16:12 London KX-Hull has been delayed by 1 hour 20 mins, far more than the GNER services which left at the same time!

A casualty of electrical supply problems in south-west Scotland, although surprisingly no VWC services into London Euston seem to be affected at this time:

My day today started terribly. I woke up to noise of torrential rain pounding on my window, which always puts me in a bad mood, as you know its going to be a wet, miserable day. My dad then, thankfully, gave me a lift to Ashton station at about 0815, where unusually the ticket clerk was stood under the canopy in the carpark, telling all pax that there were NO trains to Manchester, due to tw*ts (well he dnt say tht- but thats wht they are!) burning vital signalling equiptment between Ashton & Miles Platting- saying there would be no service for an estimated THREE DAYS! All stopping Hudds services were terminating at Ashton, and then operating an xx:45 service to Hudds, so I got this to Staly, where I arrived at about 0855 (we got stopped at the junction for ages, letting two (presumably delayed) TPE's go North. I then asked the station master in the office when the next train to Manchester (Picc) was. He said the 0849 hadn't get gone, but was running about 45 minutes late due to yet more vandals (gipsy's this time) stealing copper cabling near Cross Gates (this copper cable thing is becoming a major problem, happening 4 times in the last two weeks around W.Yorks). Anyway, he said I would be better off getting the RR bus to Vic, which seen as I was using my Northern pass (and technically hadn't a valid ticket for TPEx), I opted for the bus- plus the train was apparently loosing more time, as it had reported to have stopped for a prolonged time at Dewsbury- for no apparent reason. By now, I should have arrived at college, I eventually got to Manchester at 09:55, arriving at college at about 5 past, meaning I was 1 hour and 5 late, when usually by gettin the 0820 off Ashton, I get to college with 10 minutes before I need to be there. A complete journey from hell. And I have the same prospect of a bus tommorow, unless Notwork Rail work jolly hard to night.... but I doubt that.

*EDIT* Looked on the national rail website, and it is estimated that it will be cleared not in two or three days, but nearly two weeks!!! On week commencing 25th Sept, this is also more serious than I first realised, also affecting the Oldham Loop / Shaw & Crompton, as well as the Ashton line, whatever the perpetrator(s) have done, it must have been serious to knock out two separate lines, for such a prolonged period of time.
Effected area: http://www.nationalrail.co.uk/download/managed_files/Vandalism_near_to_Manchester_Victoria.JPG
Y

Max said:
I'm guessing GNER has been given major priority tonight after the train breakdown on the ECML - 16:12 London KX-Hull has been delayed by 1 hour 20 mins, far more than the GNER services which left at the same time!

If you're suggesting that a Hull Train was ready to depart for over an hour, but was held waiting loads of GNERs, that wasn't quite the case

The Hull Train was not ready to depart earlier because it was over 2 hours late on it's previous journey, along with several GNER trains that were also affected.

Long trains with loads of passengers should always get priority over short trains, but sadly it doesn't always work like that. Would be nice if it did though

probable reasons for GNER not being so heavily delayed northbound this evening:
1- Rules of the Plan force trains from destinations further afield to have longer turnarounds (some people moan about this, and even criticise GNER for NR's rules, but they're there for a reason)
2 - GNER can 'step up' departures, where possible. HT can never do this as they won't have any spare rolling stock or crew.
M

It says on Nat Rail that a normal service may not resume until 25th September!
D

I saw up to three weeks somewhere!
Y

It's daft really, there's no good reason why HT should have a shorter turnaround than an ex-Leeds GNER. It's only done because otherwise there would not be enough platforms, and also HT wouldn't have enough sets for it to be a viable service. It makes a mockery of the reasons for having minimum turnaround times. Especially when they are further reduced at peak time due to pressure on platforms.

Anyway, that's the reason why HT can't recover so easily from delays incurred on a preceding journey.

Where's this available from?

Is this just a fancy version of the NRES website, or is it better?
D

See gneral discussion, there is a thread about it

I see the GLC-PLY was cancelled at Preston!

It's not bad actually. Try this: http://web.mac.com/balazsboros/iWeb/Tubetrack/Home.html

Btw, it was developed for the Mac, but adapted to run on Windows.

Liam said:
I see the GLC-PLY was cancelled at Preston!
Click to expand...

I think the unit working the 16:29, which as you say, was terminated at Preston, has restarted as the 18:29 to Plymouth, because it's showing up as "No Report" North of Preston, suggesting it started at Preston.

Max said:
A lightning strike between Middlesbrough and Northallerton is also causing delays.
Click to expand...

I'm not surprised. It was a really nasty storm. I was in Northallerton at approx 1630, and it was building up then (fantastic light show though). When I reached Thirsk about 30 minutes later, I couldn't drive above 20mph, because the rain was coming down that hard....
T

We've had plently of fun and games with the rain today, abit more serious than the usual endless list of "Tree down at..."
T

metrocammel said:
*EDIT* Looked on the national rail website, and it is estimated that it will be cleared not in two or three days, but nearly two weeks!!! On week commencing 25th Sept, this is also more serious than I first realised, also affecting the Oldham Loop / Shaw & Crompton, as well as the Ashton line, whatever the perpetrator(s) have done, it must have been serious to knock out two separate lines, for such a prolonged period of time.
Effected area: http://www.nationalrail.co.uk/download/managed_files/Vandalism_near_to_Manchester_Victoria.JPG
Click to expand...

Sounds pretty serious indeed! Presumably there's some sort of temporary block working (or at least some sort of emergency working!) through the affected area, which is why all services but the longer distance ones have been cut? Wonder how movements to and from Newton Heath have been affected!

Fat Controller said:
A normal service may not resume till the 25th? But how am I to catch the Lard 222 to Dorset and buy cakes in the meantime?
Click to expand...

Its now the era of the rail replacement bus

Forget yesterday's speed run from Glasgow to London- Manchester Victoria (Rochdale end) is now being turned into a motorway, whilst the police play the game of "Who dunnit?" with the missing signalling cable