A day out in Dublin

I have never before travelled on a train in The Southern part of the island of Ireland so thanks to a £19.90 return on Ryanair from BHX I thought it was about time I sampled what it has to offer.
I wanted the day to include a lot of variety but the emphasis on loco hauled so I formulated a little plan.
First off 350109 and 235 took me to International and the short monorail trip to the airport. Security was passed in 10 mins and I was airside at BHX only 30 mins after leaving my house. Flight was uneventful and I am pleased to announce the Ryanair trumpet is still a thing!
Upon arrival the first thing is source a visitor leap card for the bus into Dublin and a few tram leaps. I have a free coupon for all the train travel. 10 lighter and I get on a bus for the first time in years!
Journey was quick to Connolly but then slow to Hueston but I did get there in time to have a bit of a LUAS leap. 3008 to Busaras and 3022 back the other way. I was still in good time for my first Irish train trip. 222 on the 1100 Dublin - Cork. My intention was to do this to Portlaoise for a unit back to Dublin. The train back was booked to depart at 1220 but at 1215 or so an announcement was made that the next arrival was non stop to Dublin. Imagine my surprise when 229 on a Cork - Dublin service stopped and opened its doors. Not to look a gift horse in the mouth I jumped on. Apparently the train had to make an unscheduled stop at Portlaoise because someone was taken ill on the train and needed medical attention. Someone's misfortune was my gain.
I found the loco hauled stock to be quite pleasant. Nice big drop down tables in airline seats easily big enough for a laptop. The ride was a bit rough in places though.
So two locos in the book I jumped on the LUAS again 3002 took me to Connolly for a bit of DART action. 8322/8337 and 8335 took me the mile or so to Dublin Pearse. I quite like the DARTs to be honest so had 8621/8623 back to Tara Street before jumping on my first unit 29007 which was following behind. Back at Connolly I had a bite to eat before 228 on the 1520 Enterprise service took me to Drogheda. I did like the layout of the coaches on this. Nice seating with large tables. By the time I got to Drogheda it was absolutely throwing it down so I was glad I only had 10 mins or so before taking 29014and 29020 back to Connolly. Functional units these. Wish I had travelled on a 22 class unit for comparison. I would have, of course, if that pesky loco hauled hadn't turned up at Portlaoise.
Arrival back in Connolly around 5 so another LUAS leap. This time 4002 took me back to Hueston and then the bus again to the airport.
Most enjoyable day indeed. The flight back was marred slightly by having 6 middle aged Welsh women sit behind me who felt it necessary to screech, cackle, shout and such like for the entire 40 min flight. Thank god for headphones. All that was left was 350128 and 257 to return me to Berkswell and a very satisfying day was concluded.
A few pics are on my flickr at https://www.flickr.com/photos/xcdrichard/ along with other assorted rail pics
R

Nice day out there Richard, I should use my privileges more. I only went bashing in Ireland once in 1992 for a railtour. Should've gone to Cobh, went in completely the opposite direction to Sligo. That's Ireland! Nice flickr site too, enjoyed the aircraft pics.
Last edited: 28 Apr 2016

Sounds like a fun time in Ireland! 30 mins home to airside is very impressive, even if you do live close! You were lucky with the the train additionally stopping at Portlaoise too.
M

jayalongtheway said:
Nice day out there Richard, I should use my privileges more. I only went bashing in Ireland once in 1992 for a railtour. Should've gone to Cobh, went in completely the opposite direction to Sligo. That's Ireland! Nice flickr site too, enjoyed the aircraft pics.
Click to expand...

fishquinn said:
Sounds like a fun time in Ireland! 30 mins home to airside is very impressive, even if you do live close! You were lucky with the the train additionally stopping at Portlaoise too.
Click to expand...

Yeah. Extra Loco hauled. Although I was keen to sample a 22 unit

Excellent stuff.
It really takes me back.
I had a couple of years when I was a frequent visitor to Ireland, chasing loco haulage.
Many times I had a day trip, driving to Leeds/Bradford, plane to Belfast, taxi to the station, Enterprise to Dublin Connolly, over to Heuston, two or three round trips to Kildare then bus to Dublin airport for the plane home.
I also did a few multi-day moves, often with 45135.
I remember one great occasion, we did 087 from Heuston to Limerick, then back as far as Portlaoise.
As we watched it leave, the last two surviving 121s, 124 & 134, slowly pulled in on an engineering train.
Then the signal cleared and the driver gave it some stick.
What a noise!
Both of us just went "Wow!"

Here is the magnificent pair just prior to opening up: 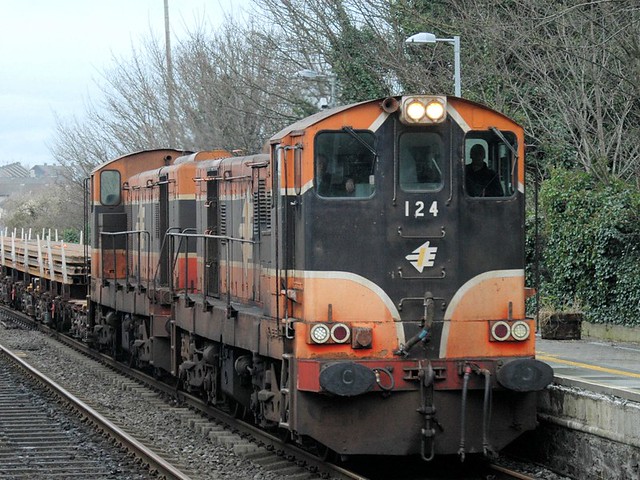 Another time I had one of the best runs I've ever had anywhere.
071 was four minutes late leaving Heuston and five early into Kildare, giving me plenty of time to stroll over and get a shot: 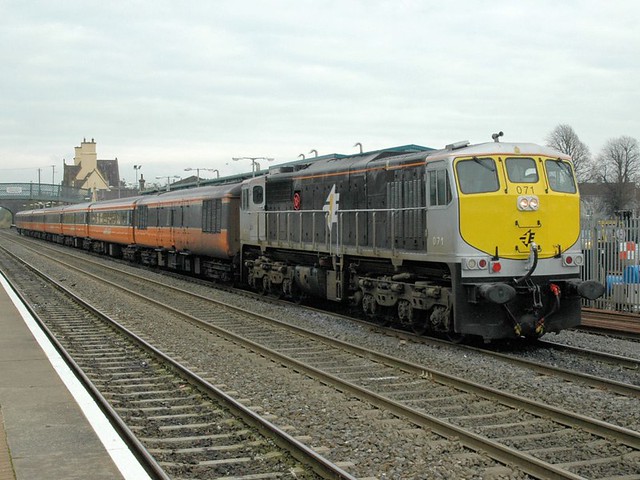 Brilliant, thanks for rekindling the memories.
I stopped going when it became 99% units, but what a fantastic couple of years.
I must go back, though, as I still need 206 and 230.
M

It was a first time for me. Sad I missed out on some of the older stuff. I really should have made the effort before now.

Was most enjoyable though. Will be back very soon

Glad you enjoyed your little adventure!

I don't remember having that trumpet sound last year, but if it is still going that's good news!

Amazing how different the Irish trains are to ours! Even though it's obviously not British Rail, I expected much more similarity due to how close the countries are geographically.


Sent from my iPhone using Tapatalk
4

206 is still in traffic though.

Oh well, I've nobody to blame but myself, I haven't been for nearly eight years - for no reason other than lack of motivation.
Thanks for the gen, though.

Interestingly, I recently found a handful of my old moves books in the garage (which is great as it has a few unit moves in that I've been able to add to my database

).
I just picked one up at random and the entry I found myself looking at was for the 16th of November 2007, thus:

This was followed by tram 3002, although where I took it from and to isn't recorded but I would assume I boarded at Heuston and bailed somewhere for the airport bus (probably O'connoll Street).
That's what I love about this forum, it stirs up old memories and gets me reminiscing about past moves