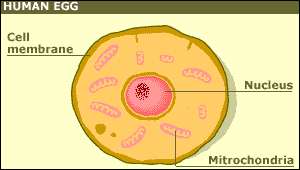 UK scientists have won permission to clone a human embryo that will have genetic material from two mothers.

The Newcastle University team will transfer the nucleus of a human embryo made by one man and woman into an unfertilized egg from another woman.

The groundbreaking work aims to prevent mothers from passing certain genetic diseases on to their unborn babies.

Such diseases arise from DNA found outside the nucleus and thus inherited separately from DNA in the nucleus.

The are collectively called mitochondrial diseases.

Mitochondria are small complex structures, which exist in every cell of the body, except red blood cells. They are the 'powerhouse' of the cell, producing most of the energy that we need to grow and live.

Those organs in the body that require a lot of energy to work properly, such as the brain, heart and kidney, are particularly dependent on well functioning mitochondria.

One unique feature of mitochondria is that they have there own DNA, mitochondrial DNA, which is inherited from the mother only.

Studies in mice show it is possible to prevent the transmission of mitochondrial disease by moving the nucleus from an egg containing bad mitochondria to another egg which only contains good mitochondria.

Professor Doug Turnbull, professor of neurology at Newcastle University, and Dr Mary Herbert, scientific director of Newcastle Fertility Centre at the city's Centre for Life, now plan to do the same in humans.

US scientists at the Institute for Reproductive Medicine and Science of St Barnabas, New Jersey, reported back in 2001 that they had successfully done similar, giving rise to 15 healthy children who appeared to be free of their mothers' disease.

Their UK research, permitted by the Human Fertilisation and Embryology Authority and funded by the Muscular Dystrophy Campaign, will check that transplanting the nucleus works and is safe.

Although the resulting egg would never be allowed to develop into a baby, if it did the offspring would still resemble their mother and father because the mitochondrial DNA do not dictate things like hair colour.

About one in 5,000 children and adults are at risk of developing a mitochondrial disease.

The group of conditions Professor Turnbull's team will look at is called mitochondrial myopathy.

These cause muscle weakness and wasting, making it difficult for those who have it to move normally - some may need to use a wheelchair.

The Muscular Dystrophy Campaign said it was delighted that the HFEA had given approval for the research project.

Head of research Dr David Harrison said: "The innovative approach being tested by Professor Turnbull may lead to a treatment for mitochondrial myopathies, a group of conditions that dramatically affect quality and length of life."

The public are currently being consulted about their opinions on laws governing embryo research such as this.

Some believe it is dangerous and unethical to do human cloning work.

Josephine Quintavalle from Comment on Reproductive Ethics said: "This shows once again that the HFEA does not have any regard for public consultation and the views of the public."
Click to expand...

Bad news IMO, the more men learn how to mess around with human bodies, the more bad can be inflicted into the world.

Yes, it has its advantages, but something sinister could rear its ugly head. Just doesn't seem right.

Nothing wrong with it, so long as it is controlled.

With America's stance on such issues I can't see it becoming widespread anyway.
A

Mitochondria are now thought to have been aerobic bacteria in their own right living in the bodies of all living things millions of years ago. They then attacked the anaerobic bacteria living in bodycells, and over time, they are thought to have become one with the cell in a process of symbiosis. Residual DNA remaning in the mitochondrions is the main supporter for this theory.

My word is go for it. It's the kind of work I hope to do in the future.

Based on that should people 200 years ago have stopped studying the body - consequently we would have no modern medicine?
T

Based on that should people 200 years ago have stopped studying the body - consequently we would have no modern medicine?
Click to expand...

Excellent break through in Science terms, but it's a bit dodgy if you're the kid who finds out you have two mums and one dad!

The 'hard wired' human instinct is to protect the species. Therefore we will always be trying to make healthcare better.
G

Is this the end of Sex?