I could not resist the Deutsche Bahn Italia offer of 59 one-way to Milan. So I hoppened on a train for 7 hours (from south western Germany) for a trip to the Expo World Fair. As part of the trip I managed to take some pictures of tram and metro too.

The train ride alone was worth the trip. On the way out I used the route via the Gotthard to Chiasso (beautiful when the line ran along the Lake Zürich and then started to climp up the Gotthard). The return journey was via the Simplon to Brig and onward to Germany. As there was so much to see, the 7 hours passed faster than expected.

Th metro netowrk in Milan consists of 4 lines (M1 to M3 and M5). The M5 is the youngest part ot the network. Like metro C in Rome the line is fully automated. I used every day when I rode from my hotel into the city. As the line is new, the station are a lot brighter than on the other lines (very nice for taking pictures

Barriers in station Ca Granda. At some stations I also had to use the ticket when exiting 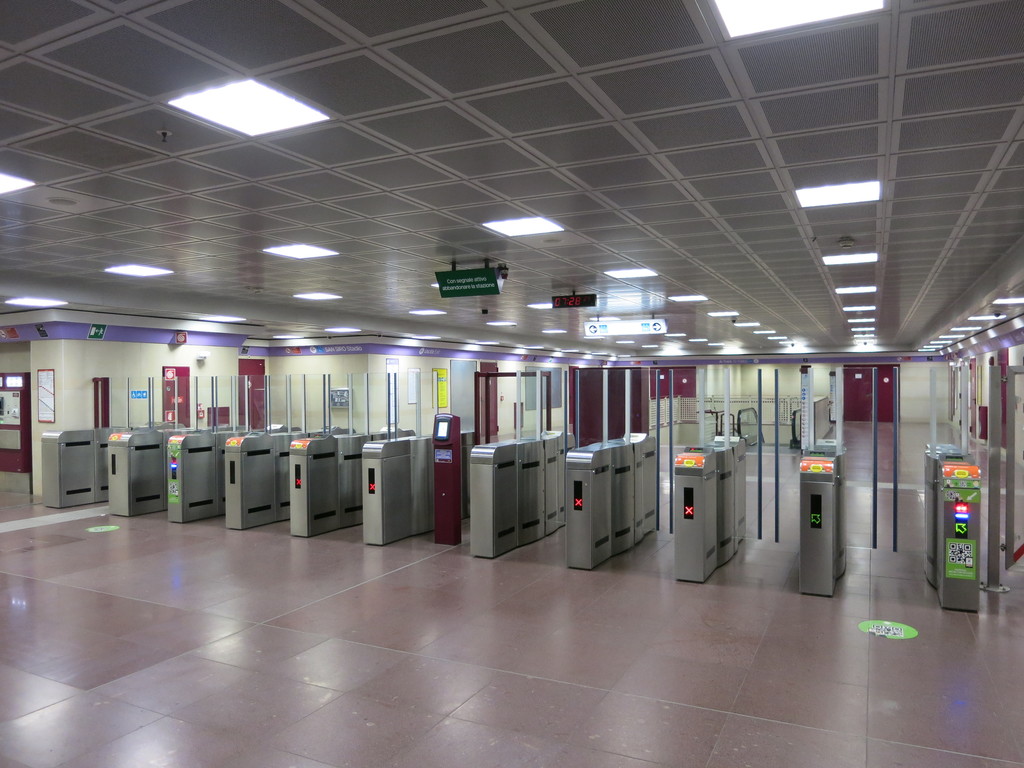 Platform doors shield the tracks until the train has arrived 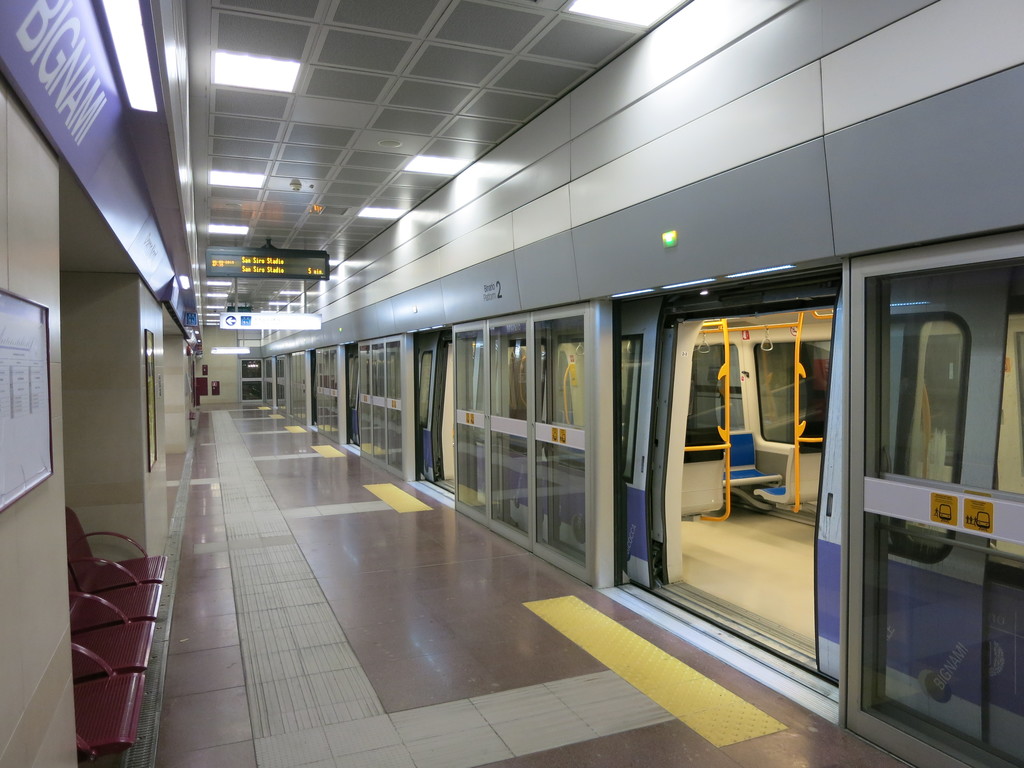 Inside a train of line M5 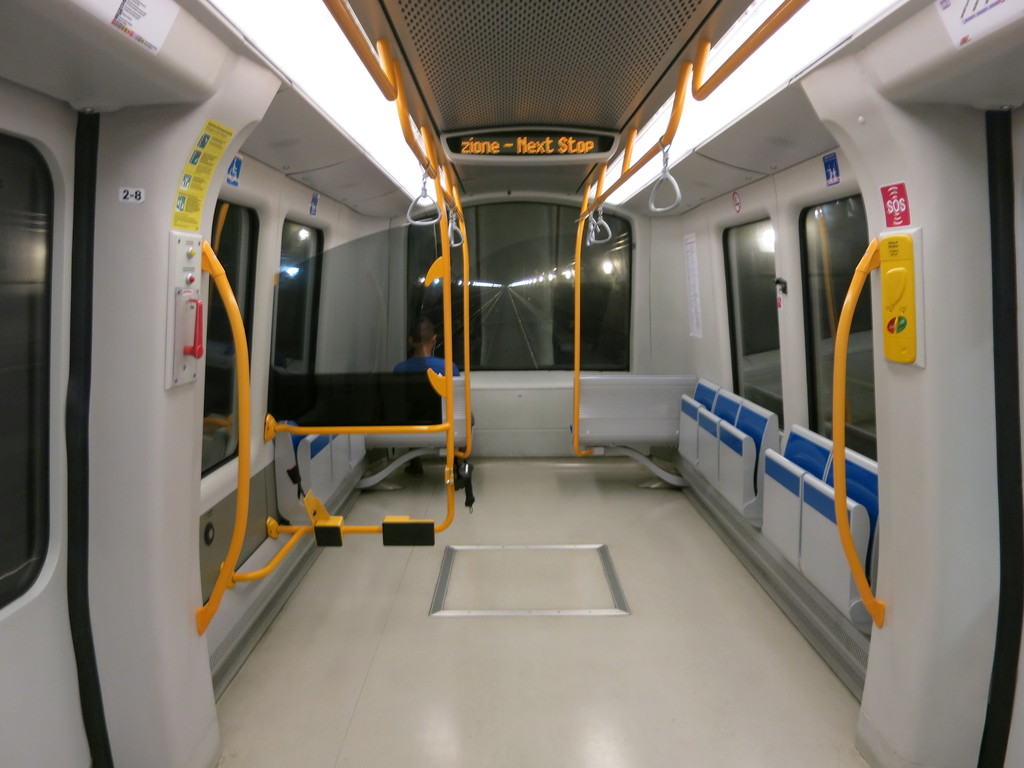 My favourite in terms of station design: P. Garibaldi. The station offers a transfer to line M2 and Milans suburban rail network 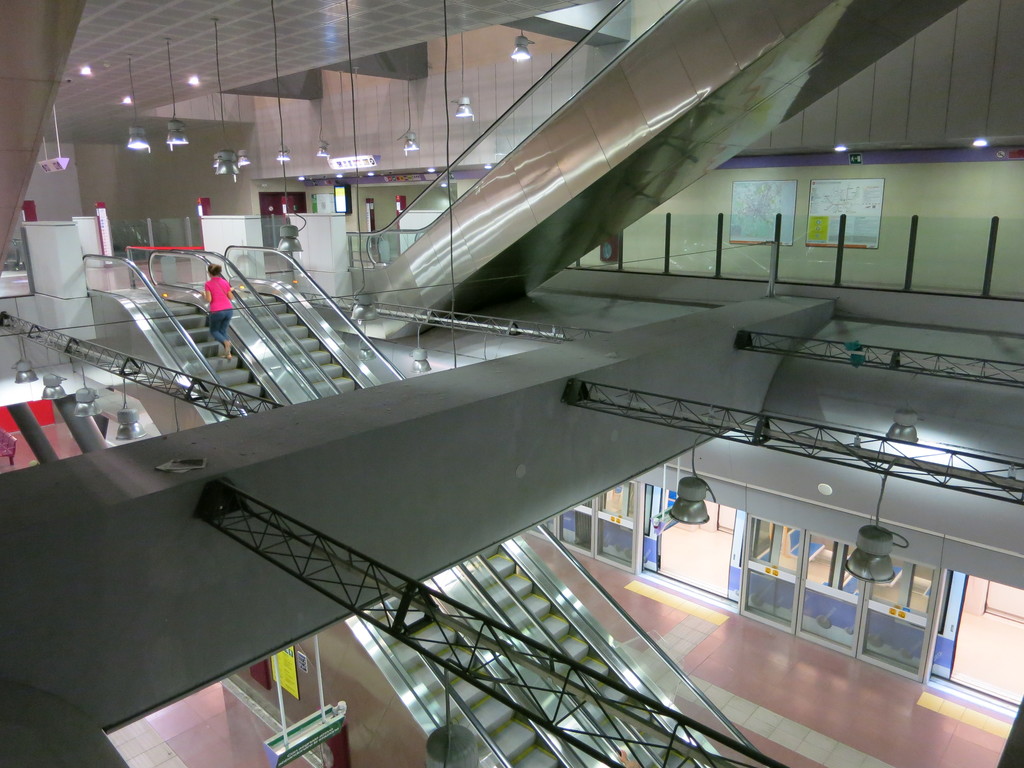 Most parts of the metro network are below the surface, so not much chance to catch trains in daylight. Different types of rolling stock of line M2 above ground around Cassina Gobba station 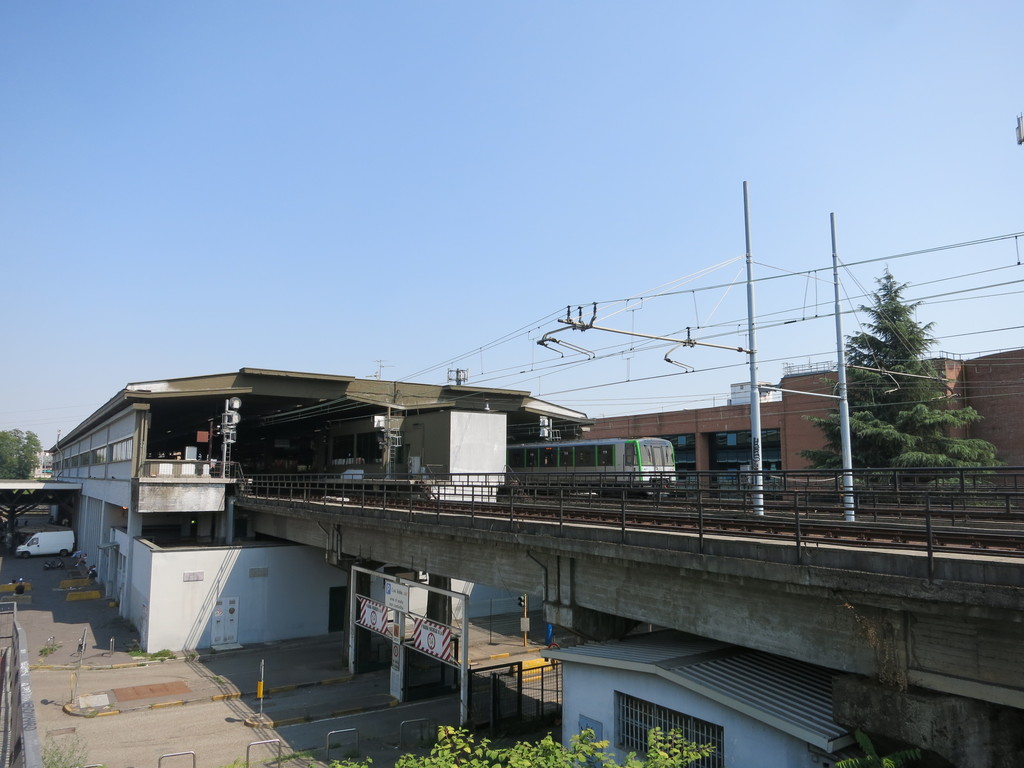 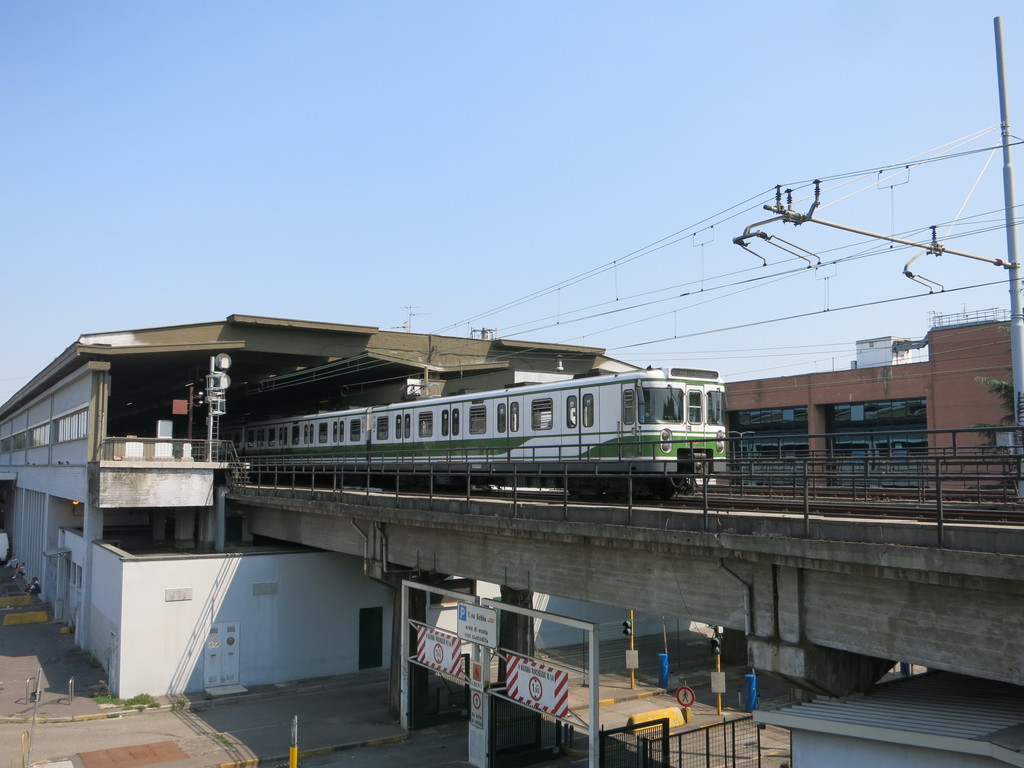 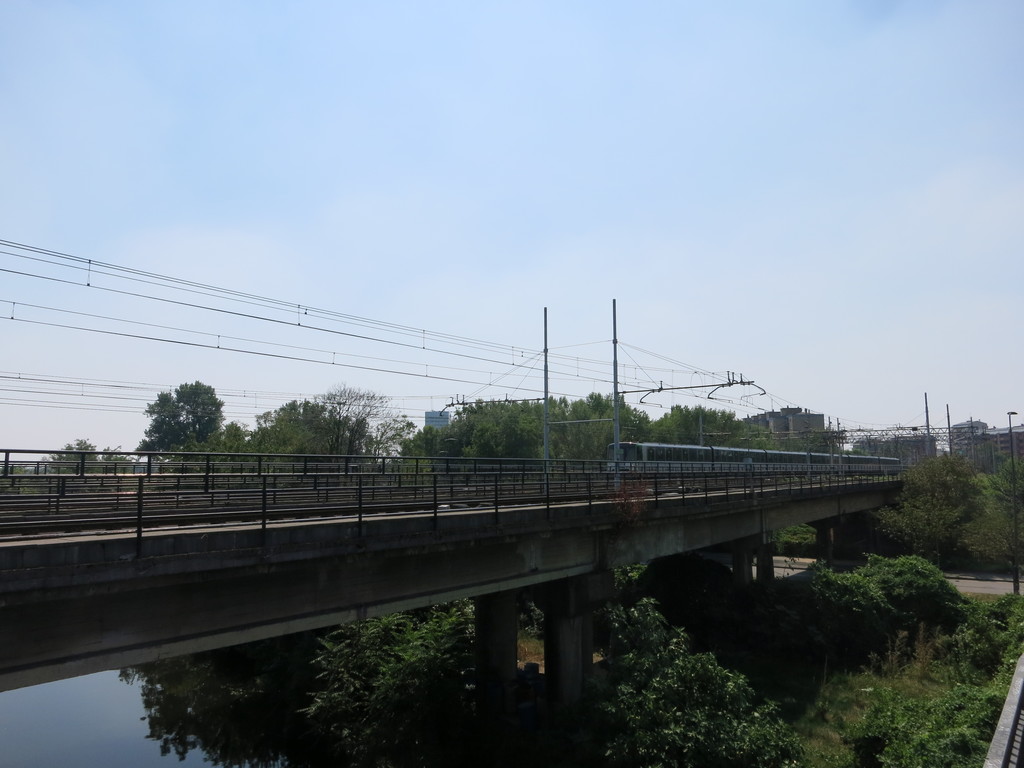 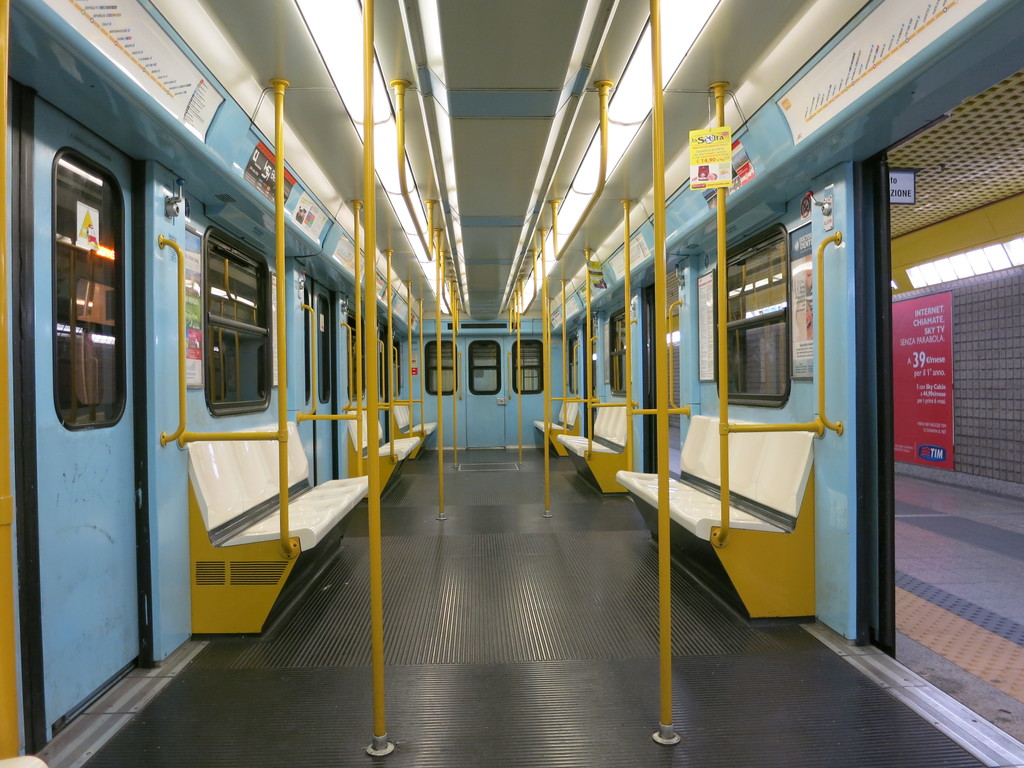 On lines M1 to M3 different types of rolling stock were in use. Some without air conditioning which made the ride very hard as summer was in full swing. I picture of a thermometer taken at the pharmacy next to the hotel (to quote the movie "A few good men": "0600 in the morning"? Yes. Customer information in the metro ranged from bare audible, Italian only annoucements to info screen like below (M1) 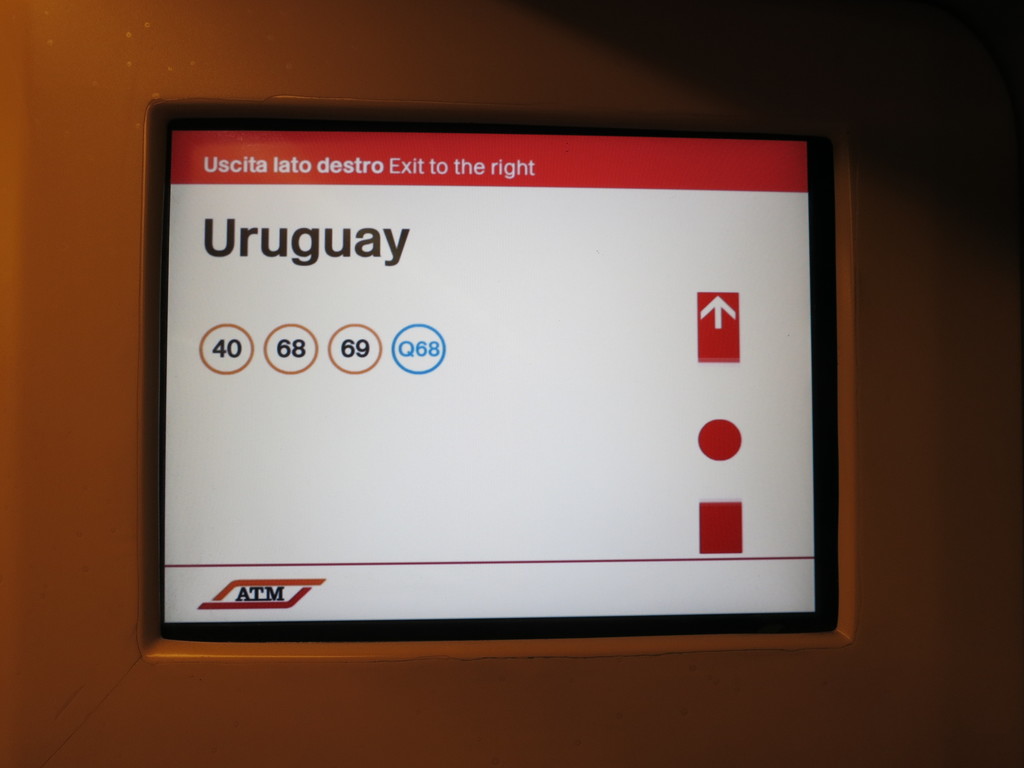 Apart from the metro, Milan as large tram network. The types of rolling stock used vary from vintage to modern. A mixed bouquet of shots taken at different points around the city. 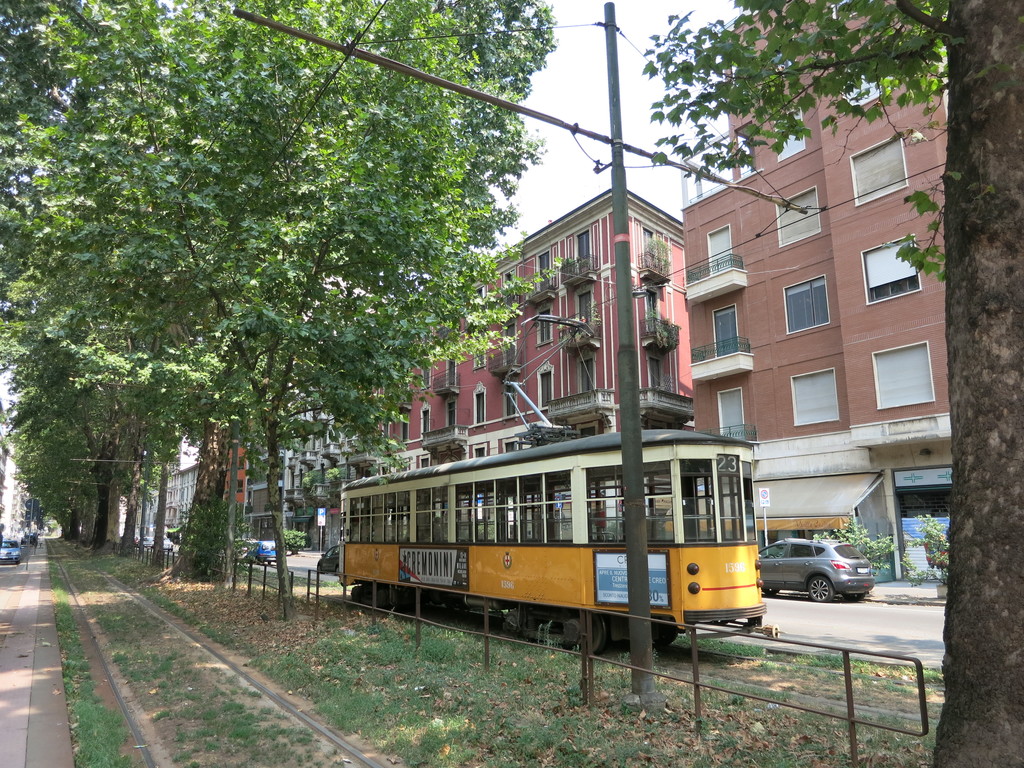 I used one of these to get from my hotel back to the station when I left. The ride was a bit bumpy, but a the perfect ending for the trip (additionally, it was a one seat ride and I did have to haul my luggage around the metro system)

Zoom on a tram taken from the terrasse of the Cathedral 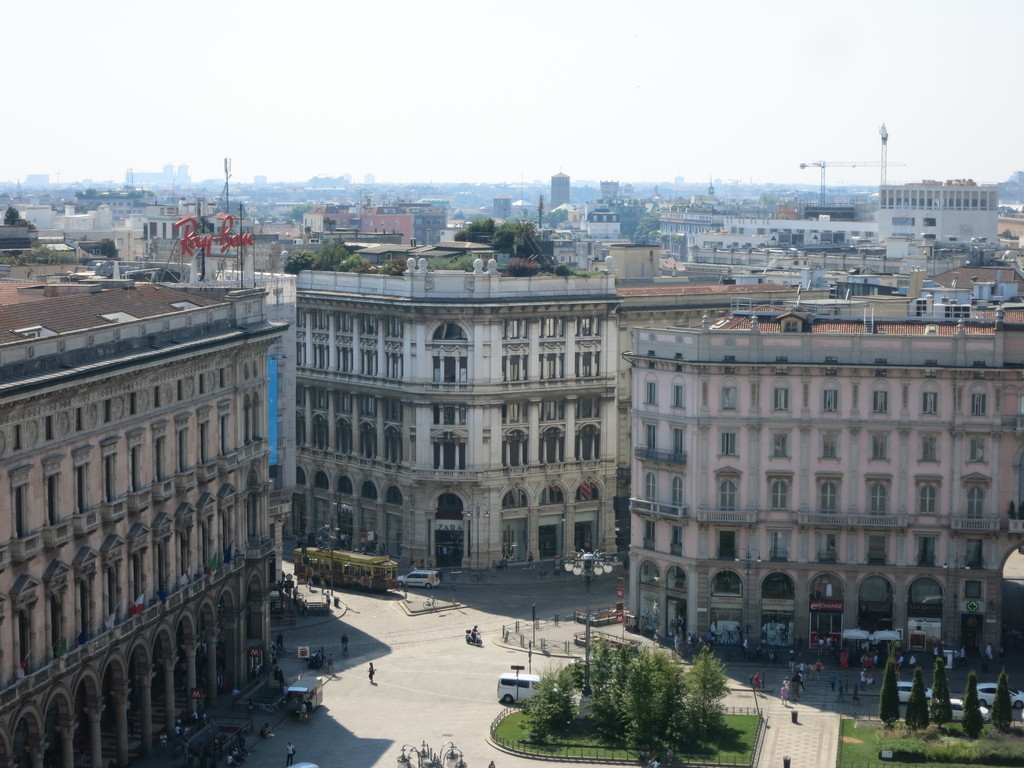 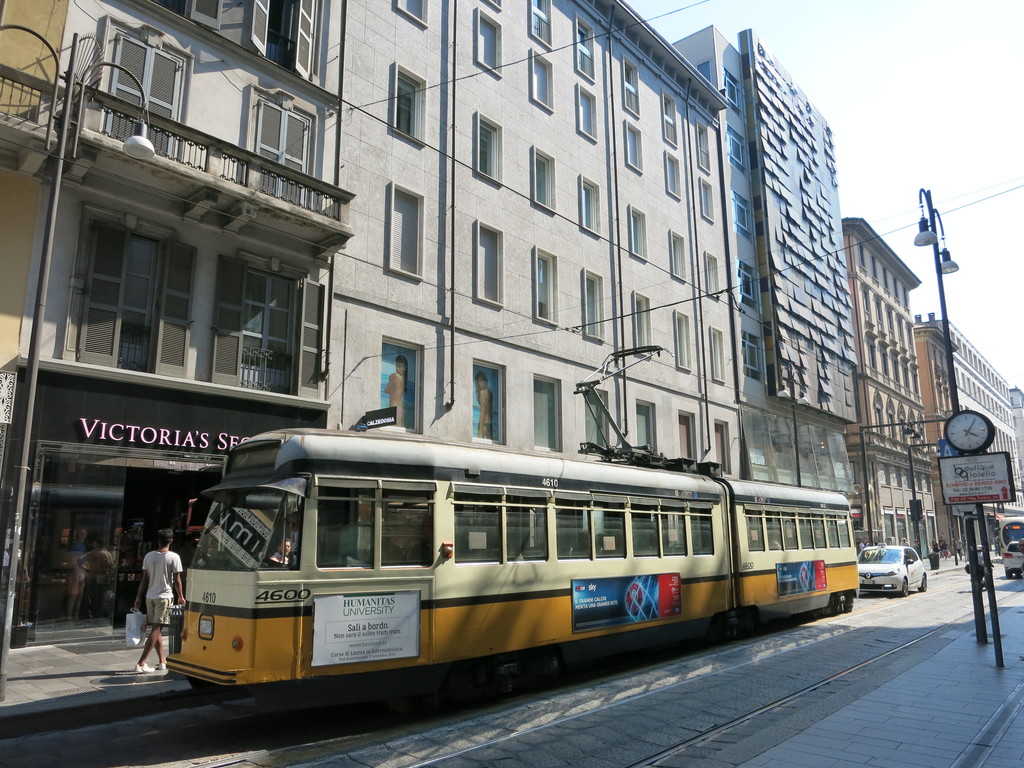 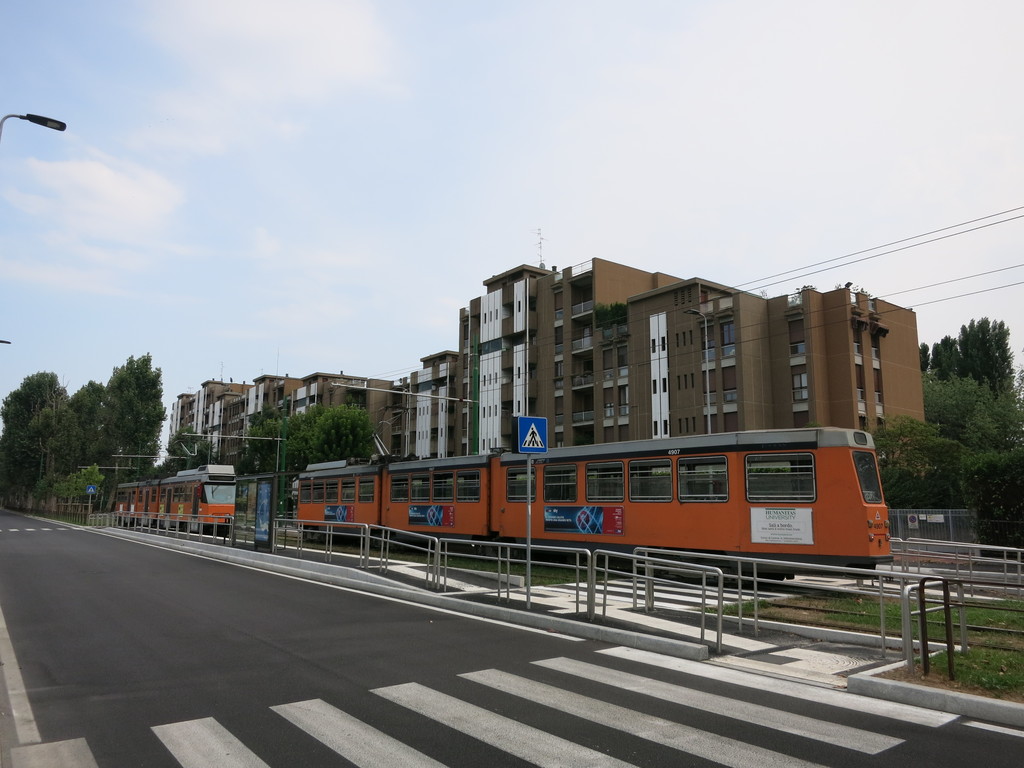 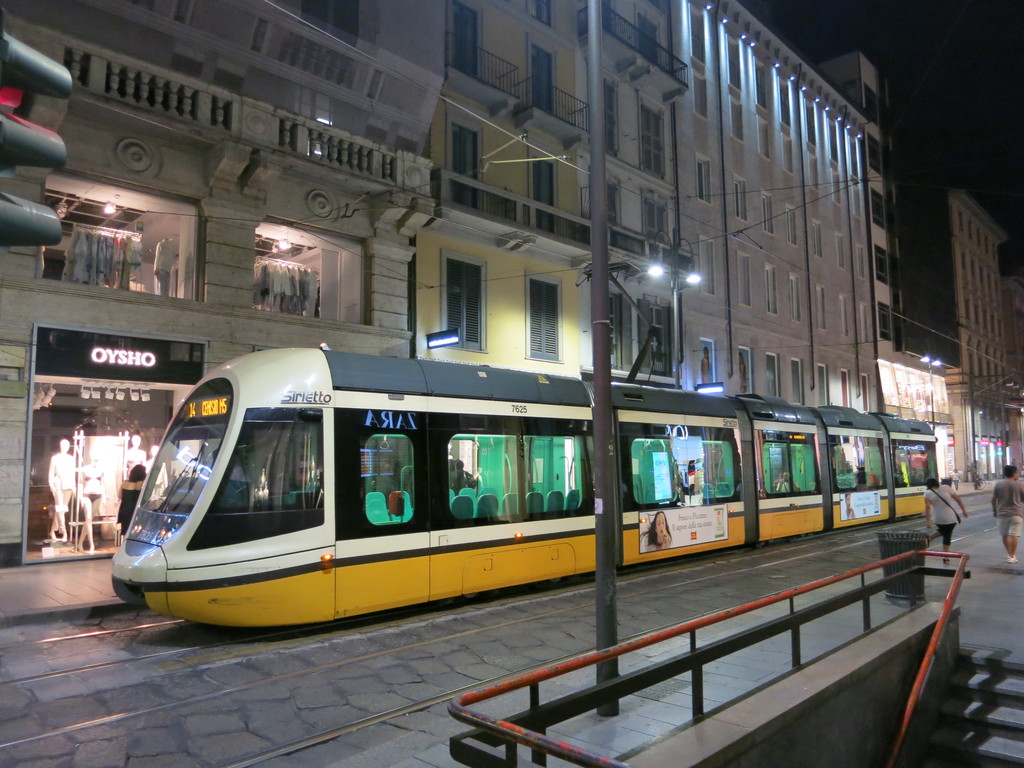 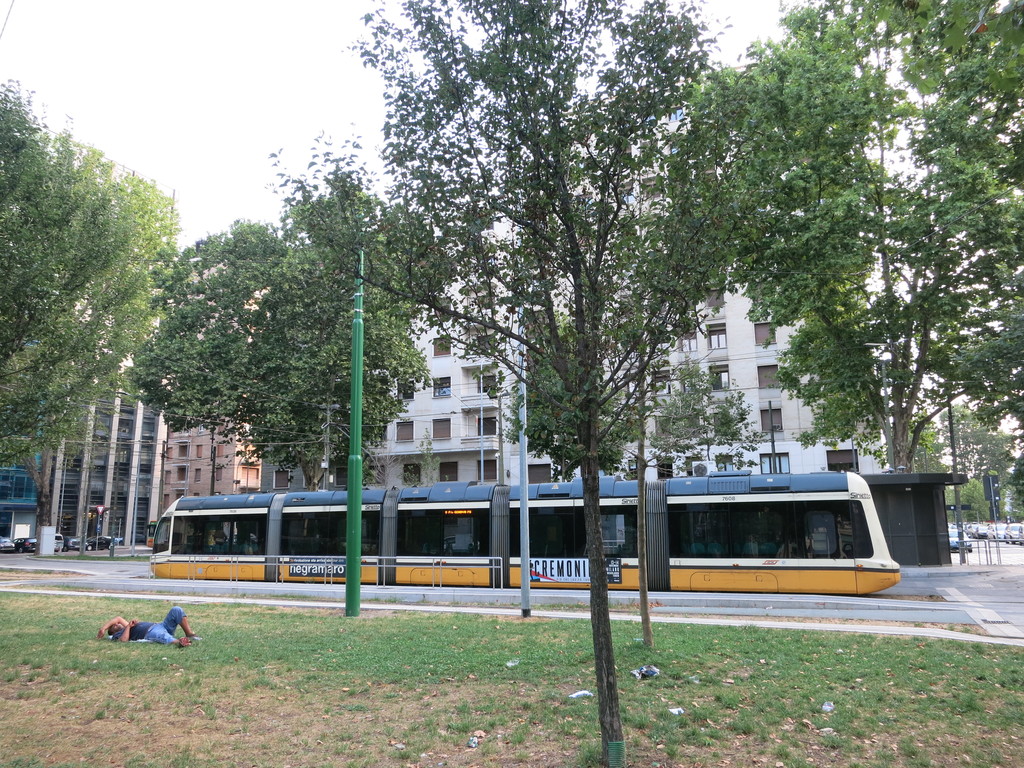 A pretty nice yellow on the ouside, but a really ugly green on the inside 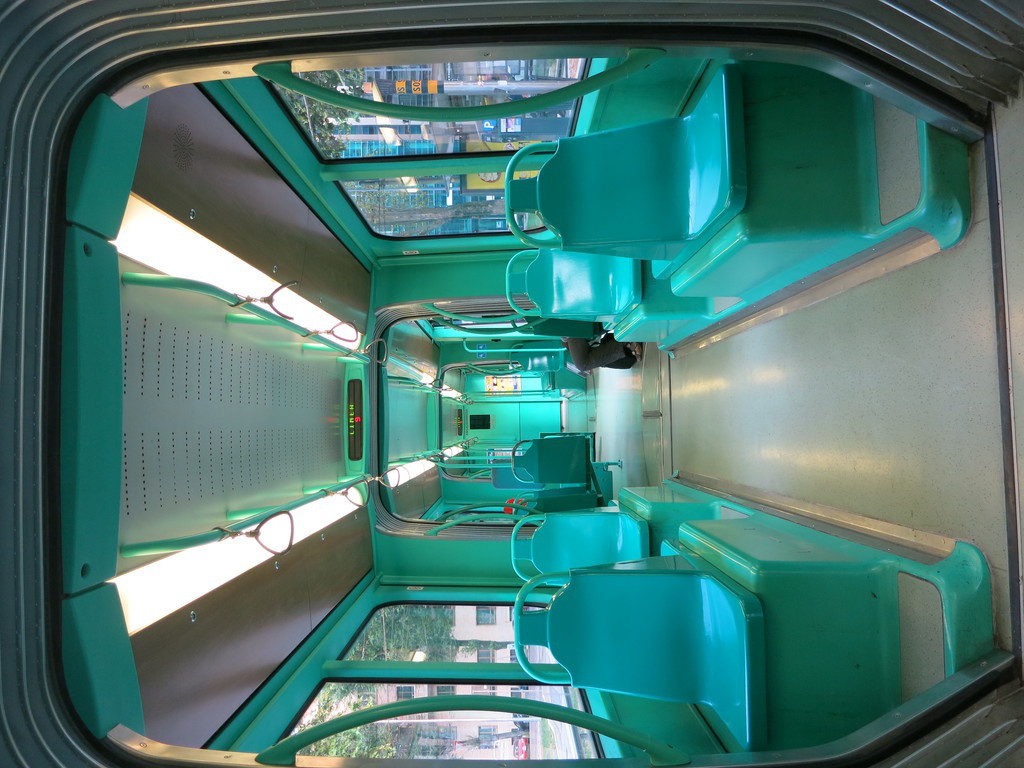 The design looked familiar. Later I found out it us train of type Eurotram, which is also used in Strasbourg, France. 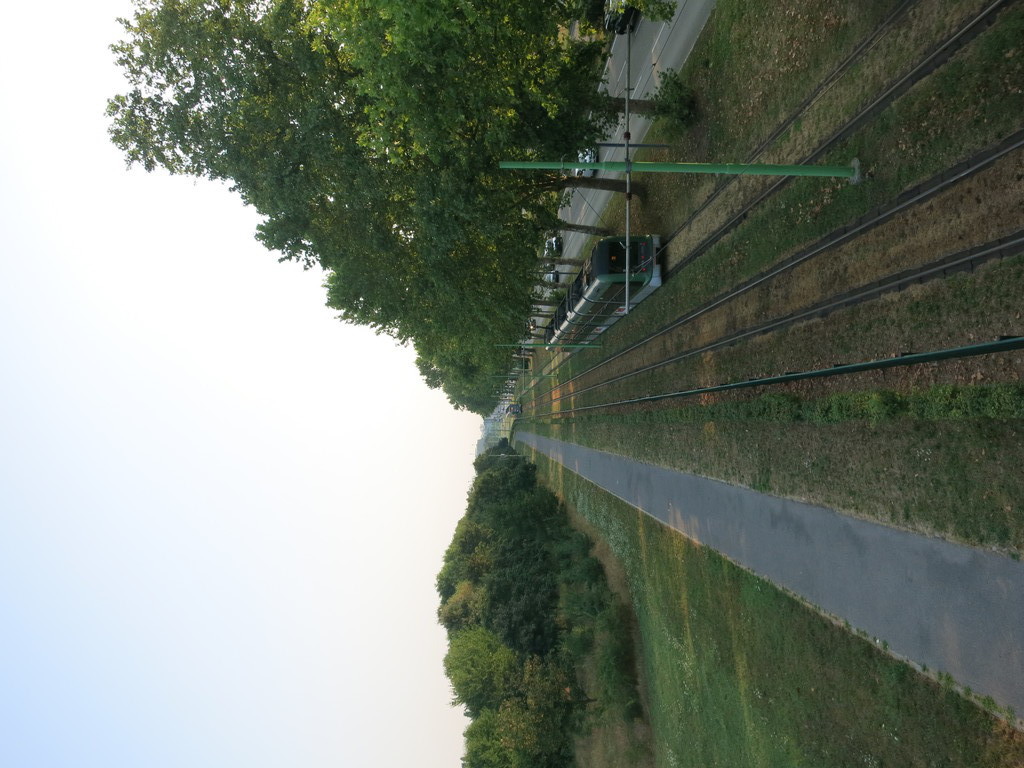 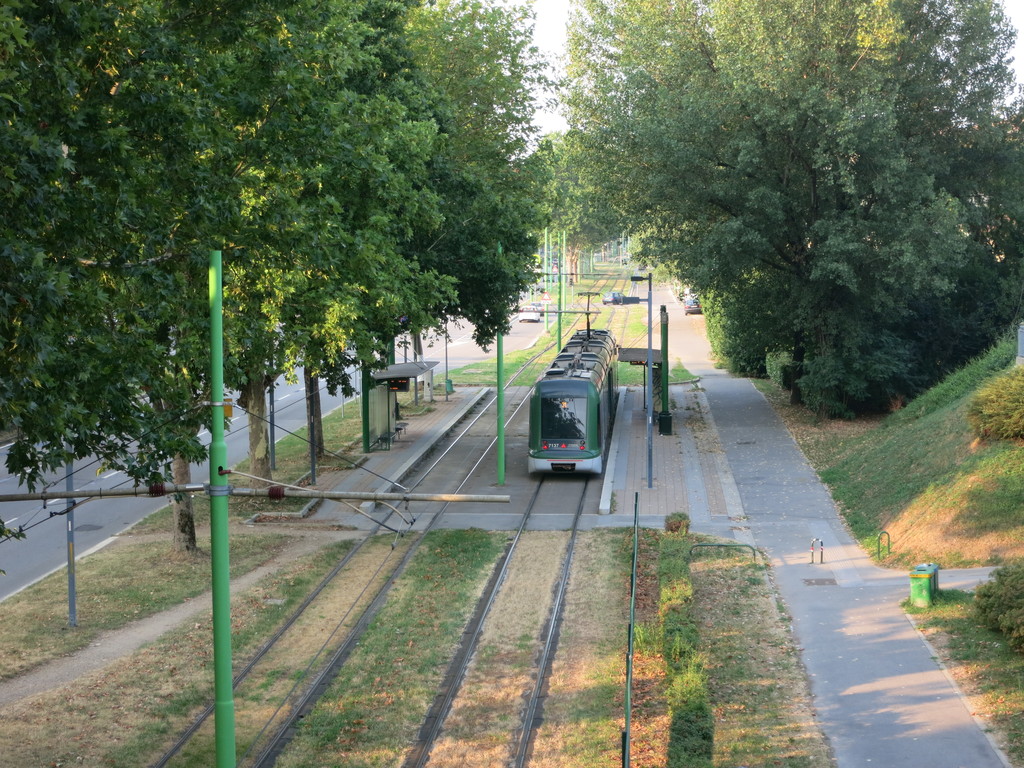 At the end some sightseeing pictures and impressions from the world fair.

A must see: The Cathedral. Pretty unusual for a Catholic church: They charge an admission fee. Church only is 2. I opted for the 11 package that included access to the terasses, which gave a nice view over Milan and offered a chance to take a closer look at the stonemasonry artwork of the building. In the mood for shopping? In "Galleria Vittorio Emanuele II" you can crack any limit you have on your credit card. The World Fair offered some great architecture like the Chinise pavilion Or do you prefer Russian mirros? At some pavilions (like the Japanese) you had a to queue for about an hour to get in. I was in no mood to that so I skipped several pavilions that I planned to visit (39° temperature takes a bit of the fun away from queueing too).

Want to see something unusual? How about a model train with a landscape made of chocolate (can be seen in the Polish pavilion - thinking back about this I can smell the chocolate again). This concludes my little compilation of impressions from Milan. I hope you liked it. Both the Expo and the city are worth a trip.

Interesting stuff, especially the old trams.
Any photos of the train journey too?

Really enjoyed that, something different indeed! Great quality photos too

The modern trains look fantastic, but who operates the doors on the metro?

Location
Where my keyboard has no £ key

Thank you for posting.

I lived near Milan around 25 years ago, so 50% of your pictures were good memories for me, the other 50% showed many interesting new developments - especially the new Porta Garibaldi Station.
Your report also reminded me of the Milanese weather - high temperatures & humidity in summer, damp fogs in autumn & winter!

Well I just managed to upset my wife (who's Italian) by showing her these pictures. What I hadn't noticed, but she did straight away, is that looking down the beautiful Galleria Vittorio Emanuele, directly at the end is a large McDonald's!
Last edited: 16 Aug 2015

As always a great report.

The metro looks rather deserted in your shots though!
K

@eastwestdivide: Unfortunately, I do not have pictures of the train journey.