I've previously linked the phots, but here is a fuller report of a weeks bash in Tunisia a fortnight ago

Tunis-Erriadh Suburbans
These were priority A - soon to be replaced by EMUs which are already years late and were on test, introduction surely can't be far off. The service operates roughly every 20 minutes with DK-hauled sets of five to eight coaches in push-pull mode, and makes lots of stops in the 20 mile or so route which results in a very entertaining driving style with on more than one occasion the loco still being under power as it hit the end of the platform prior to full anchors being applied!

The DKs are 6 cyclinder Alcos and quite simply are hell! They have a strange warble on idle but under power sound very good with clag and flames often thrown in for good measure. Around eight locos were in use each day with six off-peak diagrams and timekeeping was generally good although the odd train would drop time but then the next one would be OK right behind it.

These trains get wedged despite extra services in the peak, and the air worked doors often don't close or are held open by local kids who often just stand amazed and Europeans on their trains - we were certainly the entertainment.

Metre Gauge Mainline, Tunis-Sousse and the south
Quoted as being the fastest in the world, charging around at 130kmh/81mph on metre gauge does take a bit of getting used to! The IC trains were of good quality, you do require an 'admission' for each train which costs 1 Dinar (40p) on top of the 45Dinar (£20) 7 day all-line rover in grand comfort class. Comfort and 1st class are both very acceptable and we could always get in one or the other apart from a few short leaps and we did note Standard was generally much more wedged. The stock was in decent knick with only the odd demic window or door.

All trains are worked by modern GM built GTs with EMD645 power units so sound a little similar to our 67s but presumably due to loading gauge restrictions make a much better racket or even a heavily silenced CIE 071, they can certainly be heard roaring across the plains in the leading coach despite it being aircons. Timekeeping was a bit iffy, trains up to an hour late and some riot on the Tozeur line in the far south which appeared to be closed mid-week but no gen forthcoming.

Other Metre Gauge
There is a daily train from Tunis to the Sidi Allah Faith Loco Works which returns into Tunis around 1430 and stops at Jebel Jelloud which is the first stop on the Erriadh locals so it is easy to get out and cover it. We covered it to score DM265 and DJ128 and had no problems getting on at all, the redcap seemed quite happy watching us to leap aboard. Stock is 2 ancient DMU trailers which are knackered but its only a seven minute run with an unadvertised stop at the loco shed outside Tunis.

The Nabuel branch from Bir Bou Regba has one DMU and one DM hauled set sharing turns, there seems to be little pattern to when it swaps out but generally it was swapping during the day every other day. We did the whole branch and the next day went up to Hammamet for a short taxi to/from the Yasmine Brewpub.

Standard Gauge "Beirut Railway"
Heading West out of Tunis there are standard gauge lines to Bizerte and Guardimaou which split into two single lines at Jededia. Traction is a mixture of DK, DO and DP locos in theory with DIs also out. I particularly rated the DIs although the pseudo-NSE DPs stood out aswell. Timekeeping on the Guardimaou line was poor with most trains 30-60 down. The Bizerte line was solid DKs, we also did the 'ecs' return of the evening commuter which was more like a service train with both redcap and guard beckoning us onboard (at an intermediate stop!) with a good few normals aboard.

However, i have to give out a warning on the standard gauge; The stock is an absolute state with no working doors and many windows varying from cracked outer pane to single pane to gone through altogether, although some better stock did appear on Saturday. This side of Tunis is obviously a rough part of town as literally every train was heavily bricked. All the trains are wedged but do NOT stand by the doors as the ****ers appear to aim for the doors with seriously large missiles - we had one extremely close call which was very unnerving and brought the days standard gauge bash to an end. Brief gesture/discussion with normals and staff suggests this bricking is a long-term thing, possibly something to do with the trains being full of conscripts and the recent revolution perhaps. Also had an attempted robbery of a gold chain from one of our party but the thief went away empty handed.

But that shouldn't detract too much, we had no such problems anywhere else bar the odd flying brick but no more most places. New Chinese units are on order (first may have already been delivered) so again time is running out, probably, for most of this.

Food, beer etc
We did not eat any evening meals in the hotel to the dismay of the waiter each morning, generally paying around 20TND/£8 for food and two beers in restaurants. Local brew Celtia was decent and easily found in this lenient Muslim country, one bar close to Tunis station treated us like popstars when we appeared for about the forth time in as many days! We sampled two Brewpubs which were more expensive being in tourist complexes but had decent pils, weiss and dunkel beers being modelled on German brauhouses.

Flights etc.
We were on a Thomas Cook half-boar package holiday which worked out OK - for a first trip it gave us a safety net and no need to faff about with transfers. Shame about the 1hr30 check in/baggage/security queues at BHX on the outward and the 757 had very little leg room, such charter nonsense reminding us why we normally stick to hand luggage only!

Photography - no problems in general only being asked to stop at Sfax and once at Tunis on the stops but friendly requests after we had taken a quick snap and no sign of the mass photo police feared, many drivers also waving especially later in the week when we had presumably been recognised before.

My full phots are here and if you want to read the moves in full detail and have another take on the trip, Dan has done a day by day write-up on his site

Hopefully that ramble is of some interest - I'll do my best to answer any questions. The metre gauge is highly recommended, catch the DKs whilst you can but the GTs are worth a go in their own right. If I do return it would probably be to stick south of Tunis, certainly if the DMU/EMU introduction is complete as there is a good network we didn't see further south. 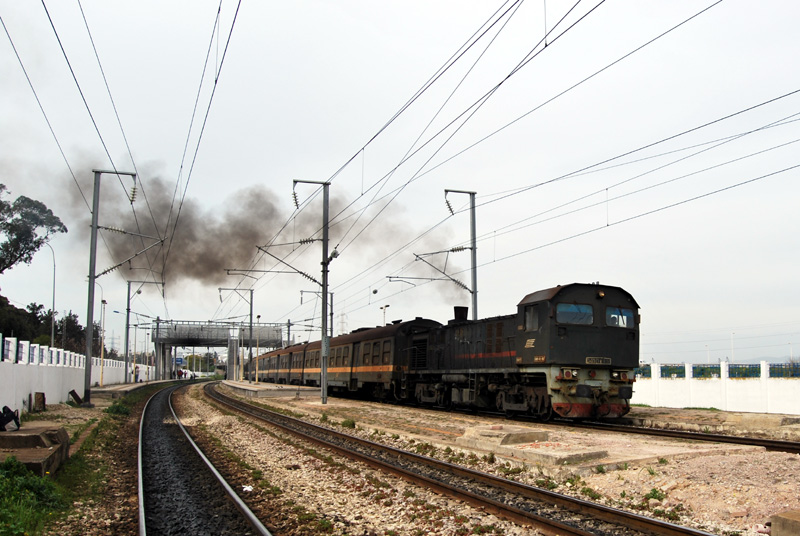