Following on from the Scenic Lines that are Underated thread I thought I would start one for international routes.

To start, I quite liked Versailles-Chantiers to Massy-Palaiseau on Paris RER C. Feels very rural and has a foresty feel to it.
R

Ruhpolding to Traunstein, a nice trundle through some alps

Most Finnish lines tend to involve hours of looking at forest

but there are some gems: Parikkala-Savonlinna through Finnish lakeland. Hanko-Karjaa/Karis, especially around Tammisaari/Ekenäs in particular.

However over the years many Finnish lines have been straightened and now cut accross lakes - between Otava and Mikkeli there are some really nice parts - one in particular is where the line was moved from cutting across the yard of a manor house to a causeway over a lake. (http://www.kekkolankartano.fi/ the line is visble in this video: https://www.youtube.com/watch?v=a3eoA7rurto )

Other than that any journey here in deepest winter with frozen lakes, snow covered trees...

In Spain, Algeciras to Ronda through the Andalusian countryside is really quite spectacular with very characterful little halts.
G

Amtrak routes 50/51 "The Cardinal" through the mountains of Virginia and West Virginia.
J

Bit difficult to know which lines are "rated" by forum members, and there's also the risk of comparing chalk and cheese, but here goes...

Germany: the Lahn Valley line up from Koblenz (only been as far as Limburg) - by comparison with the wellknown Rhine and Moselle routes.

And in Thüringen, just over the hill from Katzhütte, Neuhaus am Rennweg-Lauscha-Meiningen (and the whole area in general - I suppose the Erfurt-Würzburg route is "rated"?).

I also quite like the HSL/NBS between Cologne and Frankfurt, despite the Rhine route being more scenic.
P

Think I should say, I don't agree here. I've 'rode' virtually the whole length of this line 'all across the "top of Spain"' , most of it was cut into "cuttings". So, not much to see at all. The section of FEVE which travels South, may very well be of much greater interest, but sorry to say we did not travel on that section.
J

The Oviedo to Ferrol section has some good coastal scenery.

BIlbao to Leon is pretty good too.

Italy - The coastal sections from Catania up to Napoli, both on Sicily and the mainland, just stunning.

Iran - line down towards Shiraz has some beautiful desert and rock scenery.

I'm a big fan of the Lavaux line, particularly between Lausanne and Villeneuve but really all of it to Brig.
R

Nice-Breil sur Roya, at least after you get out of Nice, from Drap northwards.
Then change train back down through the Roia valley to Ventimiglia and back along the coast via Monaco

The Black Forest railway and the line from Stuttgart to Zürich.
3

rf_ioliver said:
Nice-Breil sur Roya, at least after you get out of Nice, from Drap northwards.
Then change train back down through the Roia valley to Ventimiglia and back along the coast via Monaco

jonty14 said:
The Black Forest railway and the line from Stuttgart to Zürich.
Click to expand...

And - less wellknown? - the Freiburg-Villingen Hoellentalbahn and the branch from Hausach to Freudenstadt.

Also - across the Rhine and a bit North - Landau to Pirmasens and the seasonal branch off it to Bundenthal.

And actually - I was pleasantly surprised by a couple of secondary S-Bahn routes in the Ruhr, Wuppertal-Essen-Duesseldorf.
Last edited: 16 Aug 2016

class387 said:
I also quite like the HSL/NBS between Cologne and Frankfurt, despite the Rhine route being more scenic.
Click to expand...

I like that too, especially given that you can sit behind the driver whilst he is "hands-off" so to speak (DOO in operation)

Alicante - Denia - love the Last Crusade bit in the middle too

In the Paris region two lines spring to mind:
* Melun to Montereau via Fontaine-au-Roi (north bank) - idyllic with a weather such as the one we currently enjoy
* Persan-Beaumont to Creil
G

The Black Forest railway and the line from Stuttgart to Zürich.
Click to expand... 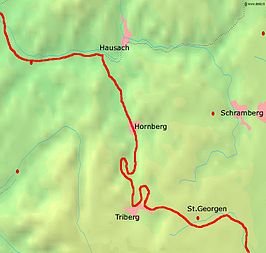 Garmisch Partenkirchen to Innsbruck, high through the Tyrol mountains.
G

Garmisch Partenkirchen - Kempten is also not bad. Going from Germany to Germany through Austria. Also nice is Zittau to Goerlitz where you switch to Poland 2 or 3 times.

Kandy to Badulla in 2nd class through the tea plantations of Sri Lanka and down the Demodara loop.

Myb said:
In the Paris region two lines spring to mind:
* Melun to Montereau via Fontaine-au-Roi (north bank) - idyllic with a weather such as the one we currently enjoy
* Persan-Beaumont to Creil
Click to expand...

Quite - that IS the Black Forest railway.

But Stuttgart Zürich is pleasant too, at least to Singen, and much less known IMO.
R

I've not been further north than Breil. You get my sympathies for missing the Breil-Vintimilla though

rf_ioliver said:
I've not been further north than Breil. You get my sympathies for missing the Breil-Vintimilla though

No, I've done that, it's north of Tende I missed.

Should have added the spectacular Cote Bleue line west of Marseille, from L'Estaque to Carry-Le Rouet at least.
Last edited: 18 Aug 2016

One of my favourites too. There are so many to chose from but the Elbe valley south of Dresden towards Prague is a pleasant trip.

I was impressed by the Ourense-Zamora section of the Galicia-Madrid line, high in the mountains near the Portuguese border.
It's rather like the Settle & Carlisle, but goes on for hours with countless short tunnels as it switches around the high peaks.
Run (on diesel on this stretch) by Alvia S-730 bi-mode/bi-gauge trains.
But it's on borrowed time, the new LAV is being built nearby, but mostly in tunnel at a lower level.

Anywhere on the RhB of course, and across the Alps generally.
Prague-Dresden and all 3 routes from Zidani Most in Slovenia have lovely river/gorge scenery.
Also the Ardennes lines in Belgium, and many lines in central Germany (eg around Fulda), for ever-changing hilly country.
The whole Mediterranean coast from Genoa to St Raphael is great, except where FS/SNCF have recently put the line "round the back" of the coastal towns instead of on the sea front, or even underground.
Last edited: 19 Aug 2016