So whats actually being done...?

Ok then, I've got back into my bve developing mode, just a little curious now whats actually under development, having read the forums I take it (UK wise) that the following are being worked on.

Anyone aware of anything else?
R

Nick said:
Ok then, I've got back into my bve developing mode, just a little curious now whats actually under development, having read the forums I take it (UK wise) that the following are being worked on.

Indeed, you are correct, although I fear the WCML and X City North have both been abandoned!

The Central Line by Stupid is WIP too I believe.

Anthony's projects has certainly NOT been abandoned and I believe that the Central Line is still up, the author (Stooopid) said he has no time to do anything for the time being (I spoke to Stooopid earlier today via msn).

I actually e-mailed Anthony the other week and this was his reply was this...

Unfortunately, I haven't really done much work on either of my routes lately. Earlier in the year I did begin giving the combined Cross-City North and South route a cosmetic upgrade to bring it closer to Watford Jn to Rugby visual standards, but my enthusiasm ran out before I completed the task, and I switched back to Watford to Rugby again, and did some more work on that instead. Unfortunately my enthusiasm for the latter ran out some time after as well, and I decided to set it aside for a while. What I'd really like is for a new version of BVE to be released, hopefully with some improvements in 3D rendering performance; that would give me a motivational boost to pick it up again. As it stands I'd have to take so much detail out of Watford to Rugby in order to make it run well enough in BVE 4, that what's left just doesn't live up to my own visual standards and I wouldn't be happy releasing it. I could also do with a new PC to make developing it less tedious, but that'll have to wait!

Anyone willing to buy Anthony a new PC?
D

I doubt it, Knowing Anthony they will both be released tomorrow! I can't imagine him abandoning it if he put all of the work seen in his fantastic screenies!
C

I remember the wait for the original Brum X-City was quite a long one - just be patient. And Nick, my line is still being built - just very slowly

I have been busy coding some route-specific objects, some rather time consuming, and trying to work on the Blackfriars extension. I plan to use the bay platforms for the Thameslink routefile due to a fictional engineering possesion around King's Cross/City Thameslink

Tyne Valley is almost finished. I have completed all of the scenery I intend to do in the Valley itself, and have decided to rebuild Newcastle Central. Here are some VERY EARLY screenshots:

Newcastle Platform 4... windows look a bit wide, need to ajdust the bitmap. Platform has been changed. Columns are to the correct height; girders are a photograph

I've started building the entrance to the station from the west. There are four arched roofs, one being slightly higher than the others.


All being well, the route shall be ready for release in October; after that, I'm going to have a go at another North East railway route....

Another route that's currently being developed (and that I'm hugely looking forward to) is the St Ives to St Erth branch line.

eezypeazy said:
and have decided to rebuild Newcastle Central. Here are some VERY EARLY screenshots
Click to expand...

Myself and Robert are still working on the WHL. It is progressing, albeit very slowly.
S

eezypeazy said:
I have completed all of the scenery I intend to do in the Valley itself, and have decided to rebuild Newcastle Central.
Click to expand...

Lovely - will you be able to curve it as per the prototype?

Smoothly curving platforms and walls? That's in the next part of the tutorial series (here's one I made earlier)

Picc - havn't worked on it much of late TBH. Been rather busy with other things all summer, sadly.
E

Simon_G said:
Lovely - will you be able to curve it as per the prototype?
Click to expand...

I'm working on it - platforms 4 and 5/6 are relatively straight. 2 and 3 are curved. If Dennis would like to share his tutorial with me fairly quickly, I'll give it a go...

hock: Dennis and quickly are not two words often used together in a sentence! Probably be a week or two depending on how much spare time I get.
E

hock: Dennis and quickly are not two words often used together in a sentence! Probably be a week or two depending on how much spare time I get.
Click to expand...

In that case, I'll plough on for the moment, but I await the "curved objects" tutorial with interest....!!!!

eezypeazy - something I have always wanted to know is if you plan to use a new track texture as I feel the current one is not as good quality as your custom objects. There are some good diesel stained tracks on http://www.railnetwork.chicsystems.com/download.htm You may be able to get away with just overwriting the bitmaps on your current track.
E

Hmm.. thanks for that, Coxster. Another forum user has already pointed me there.

As you may be aware, the track texture I'm using is one included in RouteBuilder. Personally, I'm quite satisfied with it, because it looks quite close to the real thing....

Some of the copy I have is rather bare scenery wise - have you updated some sections? This new section looks very nicely detailed. Also, have you added speed warning boards as some 60mph down to 20mph sections did not have PSR warning boards which got a bit annoying at times

There's only one 20mph TSR, and I have added a warning board about 1 mile before it.... I have put a lot of effort into detailing the structures Carlisle to Hexham; I have updated Riding Mill and put the correct signal box at Blaydon... I'm rebuilding Newcastle... I'm intending to have working semaphore signalling as appropriate, color signals as appropriate, although Newcastle's signalling will be simplified... thanks to another BVEer helping out with a copy of the sectional appendix and signalling diagrams, there will be accurate speed limits with the correct (iron) signs... I have added a better wall at Sunderland.... I will tweak the scenery in Gateshead to fill some gaps, but I haven't really got the time to do more than that.....

All my published screenies are at www.eezypeazy.fotopic.net

eezypeazy said:
All my published screenies are at www.eezypeazy.fotopic.net
Click to expand...

Excellent stuff. I've just had a look and can confirm that they're all pretty much identical to the prototype (as always)

My route is coming along very slowly, coz I'm still not entuirely sure what I'm doing, so I'm just playing around at the moment. But hopefully it won't be too long before it looks half decent!
L

Trouble is that the next section is still going to take a large amount of time to do- This doubles the route length, and the currently available section took me nearly 2 years to complete. 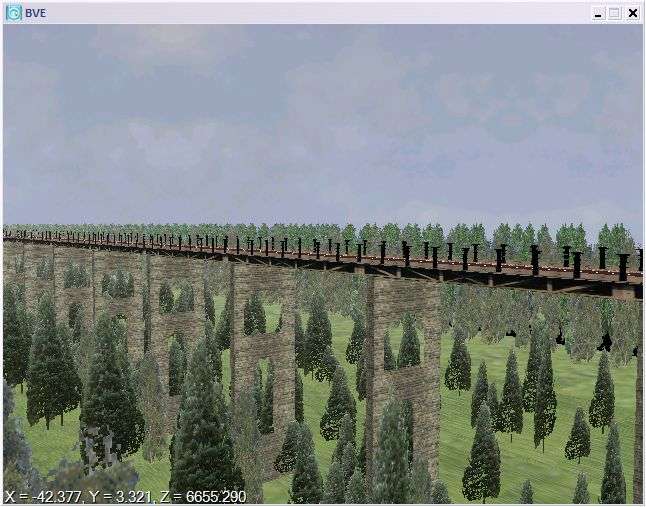 Only screenshot worth releasing ATM

There are also some additions & alterations, primarily on the existing viaducts and the way that they interface with the banks.

All in all, no idea when it will be ready- When it is.

Derby to Stoke is making slow progress, motorvation is needed though!!

Does anybody know if anything ATO is available for BVE4?

Lesjordans said:
Does anybody know if anything ATO is available for BVE4?
Click to expand...

These routes look really good from what i seen. EezyPeazy instead of starting work on another route you could combine the route with the Middlesborough or however they run on Northern? I'm thinking of doing a New Street to Birmingham International but i'll need to look at these tutorials first.
E

Ascot said:
EezyPeazy instead of starting work on another route you could combine the route with the Middlesborough or however they run on Northern?
Click to expand...

Variety is the spice of life, my friend - although I could extend my route south from Sunderland, it would still be driving 156s. No, I'll do something different for my next route.

The only ATO route i could find was http://konkyu.ogakoto.net/e_westrail_3.html however, when i go to download it, the download cancels randomly before it finishes. Was there not something about the Victoria Line for BVE4 with ATO or something?