The Definition of "Clag"..

Could someone please show me the true definition of clag please? I've looked through many fotopic sites out of pure interest and the number of photos I've seen which have been labelled as "XXXXX clagging" is interesting to say the least..

According to some people even the smallest wisp of blue exhaust is "clag".. Which of course it is not!

And please people.. Steam locomotives do not clag!! They smoke.. always have smoked, and always will smoke. Only diesel locos clag..

The reason for this is because too many times I've seen the word CLAG and I've expected to see a pic with a HELLFIREMYLORDZHAULAGE!!!!!!!!!!!!!! clag-a-thon in it, only to be disappointed by seeing a pic of a 153 coughing its guts up and failing badly in the process :roll:

So then ladles and jellyspoons.. may I have your views on.. what's clag and what isn't?
R

Clag = dust, dried up oil and other associated bits of junk that have collected in the exhaust manifold being blowing out of the roof with a white to black colouration, in thick opaque clouds.

Not clag: Normal engine exhaust, which is a pale blue translucent colour.

Thank you sire! The constructive answer I was expecting! Too many times normal exhaust has been labelled as clag.. personally I think "clag" is an overused term.. anyone agree?
C

I've just had a quick look through my photos and found these:

Either of these count as clag? 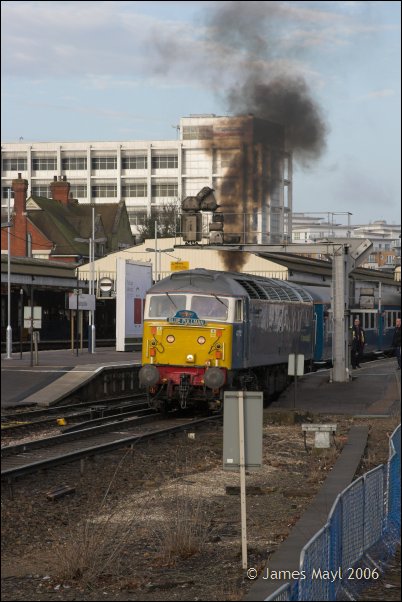 They only clag when they're about to blow up, and you know that.

Clag is clag, and when i say clag, i really mean clag! Its about as claggy as clag can be and is clagtastically clagtastic!

Sprog said:
Clag is clag, and when i say clag, i really mean clag! Its about as claggy as clag can be and is clagtastically clagtastic!

What did you say bout my mum!? *hicups*

Sprog said:
What did you say bout my mum!? *hicups*

Pay no attention to the rambling drunkard!

50149 said:
Pay no attention to the rambling drunkard!

Drunk, who you callin drunk, ugly! *passes out*

Sprog said:
Drunk, who you callin drunk, ugly! *passes out*

you can talk buttmunch!!

im am the evil thread highjacker

So then What's this then

I posted said:
Here are my latest shots of Cl66709 leaving Brighton Sheds

Cl66709 makes an appearance by clagging

RESULT TO PROVE a cl66 CAN CLAG
Click to expand...

43003 that one morning in Swansea on the 0328 (departed two minutes earlier than the usual 0330 due to engineering works)...NEVER have I seen a 43 act in the same manner as that beast on departure since. I haven't got a picture, I didn't take my camera on that day, but you'll have to trust me when I say it was some heavy-duty clag.

Julian G said:
So then What's this then

Are either of these clag or just exhaust?

Clag is thick clouds of white to black smoke as defined by AlexS in the second post on this thread.

Clag is sometimes mixed up with "Thrash". For example, the Cl37 on the tanks in an earlier post was described as "clagging", whereas in reality it was probably bleedin' loud (which is the "thrash", despite only giving out a few wisps of exhaust).
I beg to differ about the whole "causes" of clag however, for example I was stabled at Etches Park last night, and a ped on the Serco test train IMO "clagged off" next to us, though the smoke was the "blue exhaust" colour, but it still managed to cover all the yard in a diesely blue fog. But with Peds they are OK in the noise / clag departments... but they are truly pedestrian when on the move...or as people say (sing-a-long) "Slowly going nowhere!"

Thrash is the sounds you hear from the engine.

Clag is the stuff coming out of the engine's exhaust ports.

For example:
http://50149.fotopic.net/p24559942.html
I wouldn't call that clag, but you can obviously tell those locos were working VERY hard to get up the incline!
A

I saw a 158 clagging at Southampton today :eek: