Hi guys,
Can you buy any sort of 00 scale signalling sytem, or even just modren day singals (not semaphore)?
Thanks,
R

it would be a home made job, there are people that make the signals! but not the system to go with it

It depends what your after. There are at least 3 manufacturers of modern colour light signals available: Roger Murry - excellant but pricy; Berko - decent, bit bulky, but cheap; or Eckon - kits, cheap, but don't look modern enough. You can find them all online, or the latter two at some model shops/shows.

As for signalling systems, you can buy them, but as said depends on your requirements. If you have a large loft layout where you 'run' the trains more than 'operate' them, then you can buy something similar to the prototype which works with block sections - i.e. when the train passes a signal is changes to red, and then clears progressively Y, DY, G as the train moves on through the next sections. This can either be done using magnets in the train and reed switches on the track, so it is very close to the real thing, or can just be done on a simple timer delay.

If you're into operating more than running, for example you have a terminus layout as many of us do, then you can't really use the above system. I find the simplist method is just to use switches in a terminus layout - perhaps with a bit of interlocking for things like shunt signals and route indicators etc. Its cheap and it does exactly what you want it to do. There are systems out there that will completely interlock and computerise a terminus layout, but I think it's just too complecated and everything has to be correct for it to work.

Thanks for that trains2, as I only have a small layout, I'll just by simple signals, that don't require ssystems. I'll read up on the Berko and Eckon ones and see how I get on.
BTW: Can you get them from Hattons?
Thanks,

No, you don't have to connect them to the track, they are completly independant to that.

You will only need for a signal:

You can either find them on the internet, eg Maplins or Rapids, or you can buy ones from Hornby/Peco (only the On-On for 2-aspect though)

You will probably also need a resistor, if using LEDs, although this should hopefully be included. A wiring diagram is also likely to be included. Your best bet is to buy the cheapest available which is probably just a 2-aspect R/G, and see what you getting.

If I get time I'll draw you a simple circuit diagram tomorrow.

trains2 said:
You will probably also need a resistor, if using LEDs, although this should hopefully be included. A wiring diagram is also likely to be included. Your best bet is to buy the cheapest available which is probably just a 2-aspect R/G, and see what you getting.
Click to expand...

Berko signals come with the resistors wired-in for you. They're probably the best type to go for from a beginner's point of view - they look quite realistic and they don't require much (if any) assembly.

Hi,
I'm not one for elctronic, hence why I took Prduct Design rather than Electronics last year in my school options!

Thanks,
--- edited ---
OK, thanks for that. I have decided to g for the Hornby one, as it looks more simple than the rest. However, I have a PECO controller, not a Hornby one, so there is no extra DC output for me to plug the On-On switch. How will I get the power?

On-On means it is either On in one position, or On in another position. They had their thinking caps on when they named it you see.

You need to get your supply from a transformer or accessory output from a controller.

I see, yeah, I spoke to the man at the model shop over the phone, and he said you get a separate switch. I wondered how to connect it to my transformer, as Hornby have an extra supply dock on their transformers used for points and signals. However, I have a PECO transport, which doesn't have that. My Dad however, said that if I simply strip the wires and pit them in the same places as the track connectors, and screw then down, it will work just the same. Eg:
Hornby one with extra connections: 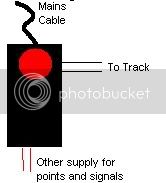 Peco one with No extra connections:

Hopefully it will work, what do you think?

Doesn't that mean that the signals will only light up when you've got power to the track? So as soon as you stop a train at the signal...it'll suddenly go out!

I assume the power controller is basically a variable resistor - so yes, the LEDs would go out.

You should be able to get hold of a fairly cheap PSU from somewhere, I doubt somewhat that AA batteries would give you 22v though!!!

I see whaty you mean Tomnick, if it is linked to that same one as the track, it will go out. I might just buy a Hornby controller. :mad:

If you're after a good new analogue controller, head for a Gaugemaster...most of their slightly better ones have a seperate connection on the rear for accessories...I power points on the unitrack I've got off it (after stripping away the plastic connector designed for a Kato only controller!)

Thanks for that, but I'll speek to the guys at the model shop when I go on Sunday, and see what they say.

Cockfosters said:
I assume the power controller is basically a variable resistor - so yes, the LEDs would go out.

You should be able to get hold of a fairly cheap PSU from somewhere, I doubt somewhat that AA batteries would give you 22v though!!!
Click to expand...

You would need about 14 AA batteries for that!
G